Credit and finance management platform Credit Karma, known best as the startup that offers free, no-strings-attached credit scores, has made its first acquisition. The company has acquired the makers of the mobile application Snowball, with plans to leverage the team’s expertise in mobile notifications. Terms of the deal were not disclosed, and the Snowball app will be pulled from the Google Play app store in the near future.

Snowball was founded by Anish Acharya and Jeson Patel, who had sold their first company, a mobile social games publisher SocialDeck, to Google in 2010. They began work on Snowball back in spring 2014. The idea with the original version of Snowball was to offer a way to connect the different mobile messaging apps on users’ Android devices – that is, something of a universal inbox for all your incoming chats.

That app grew to 250,000 downloads, but didn’t really take off the way they hoped. This summer, the team pivoted to building a “priority inbox” for all of Android’s notifications.

Though Snowball’s next version never topped half a million installs, the process of building the app itself was something of a technical feat, as the team figured out how to take over the entire pull-down notifications interface on Android, as well as the full notification swipe itself. 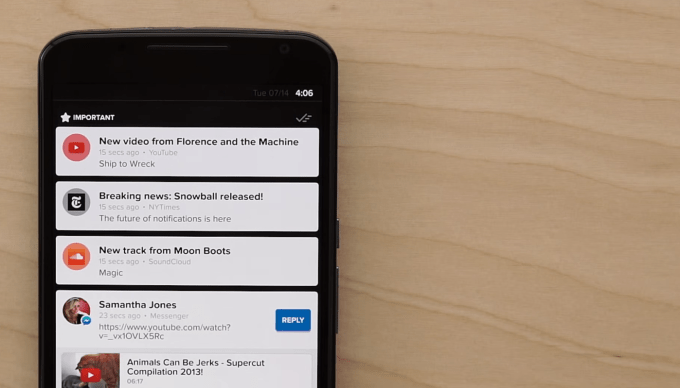 It’s this kind of expertise that Credit Karma is now interested in bringing onto its team as it rolls out further enhancements to its own set of mobile applications in the near future, explains Credit Karma CTO Ryan Graciano.

“We’re seeing a huge movement of consumers toward mobile, particularly in younger demographics. Android is a key platform for us,” says Graciano. “And these guys have really amazing experience on Android, in particular.”

Many of Credit Karma’s over 45 million total users access the service on mobile devices today. But those who do tend to be in the lower to middle credit bands – a demographic group that tends to skew more toward Android, which is why it makes sense for Credit Karma to invest in building out its Android team.

Graciano says that what Credit Karma found particularly interesting about Snowball was how they converted mobile notifications into something actionable – which ties into Credit Karma’s larger plans for mobile.

“We have tens of thousands of data points on a particular customer at any time, so there’s this constant inflow of things we could be telling you,” notes Graciano. “But sorting through all that…is a very tricky thing to do – especially in a way where you’re not overwhelming the user with spurious notifications.”

Acharaya declined to say why Snowball decided to exit, but it’s likely that the product was still not growing at the pace they desired, and that could have impacted the startup’s plans to raise more capital. Snowball had previously raised a $2.3 million seed round from Felicis Ventures, Golden Venture Partners, Google Ventures, Metamorphic Ventures, and Wesley Chan.

“For the Snowball team, it was all about the people and mission. We had a great existing relationship with ex-Googler and Credit Karma CPO Nikhyl Singhal, and as we got to know Ryan and the rest of the leadership team, we were blown away by their caliber, culture and the commitment to the mission,” says Acharya about Snowball’s acquisition.

“As we learned more about the company’s focus on improving people’s financial health at scale, it became apparent this opportunity was a unique combination of meaningful mission, significant scale and a mobile-first product focus. It is the most interesting problem, with the most interesting people, for us to solve next,” he adds.

The acquisition, which is described as an “acqui-hire,” will not involve Credit Karma utilizing any of Snowball’s IP. Instead, the Snowball app will be removed from the Google Play store, but maintained for three months. Afterward, the app will be shut down and all data will be deleted.