CEOs and CFOs of our portfolio companies often ask us, “How aggressive should we be when we set our budget? We want to grow as fast as possible and invest in our exciting new programs. But if we aim too high, we may miss our budget, lose credibility with our board and investors and quickly run out of cash. We know it’s important to under-promise and over-deliver. But if we aim too low, we may grow more slowly, leave the door open for competitors and risk a lower valuation on our next round of financing. What’s the best way to balance these competing goals?”

Based on practical experience with hundreds of early stage companies over many years, we generally recommend the following budgeting best practices. We call it the Bessemer Optimal Budget (the budget), and it involves explicitly recognizing probabilities in budgeting and forecasting.

For example, a company can set:

It can then measure the actual results. For instance:

In addition, the budget has four components:

Sales Plan And A Marketing Plan

Revenue consists of new revenue and recurring and upsell revenue.

Fast growth is the lifeblood of venture-backed companies. Fast growth requires new revenue from new customers, new marketing channels, new distribution partners and new products. All of these are risky.

Yet companies must invest in these risky new plans. We want our companies to dream big and to invest sensibly to achieve their dreams, in spite of the risks. Many of our companies reach their impressive goals, and with luck and hard work, some reach goals they never thought possible.

Other companies hit roadblocks along the way: customers delay buying, marketing experiments fail and new products are delayed. We encourage our companies to aim high. Even if they don’t succeed, they often achieve more than they would have achieved with more modest plans. As a result, the sales plan for new revenue, recognizing the inherent risk, has a 30 percent probability of achievement.

Fast growth is the lifeblood of venture-backed companies.

Andy Grove, in High Output Management, points out that in professional sports (which is highly competitive, optimized and measured), 50 percent of the players win every game, and 50 percent lose.

We believe a revenue budget with a 50 percent probability of success, as in sports, is a best practice.

To achieve this, best practice companies start with the sales plan and/or marketing plan, then build in a cushion for unforeseen delays and surprises. Then they add recurring and upsell revenue from existing customers, which is more predictable than new revenue.

Offsetting this, venture-backed companies often can’t recruit all the high-quality employees as fast as they’d planned, so employee costs may be somewhat under-budget.

A 50 percent probability of achieving the revenue budget, combined with possible expense surprises, creates too much risk for venture-backed CEOs and CFOs, who want to ensure that their cash burn, measured in dollars, and their cash runway, measured in months, at least meets their plan.

Best practice CFOs have a solution for this: the reserve. The reserve is budgeted as an expense line, in reserve for unforeseen expenses or revenue shortfalls. The amount of this reserve should be sufficient for the company to achieve its cash budget 70 percent of the time.

This gives the CFO, CEO, board and shareholders confidence that the company has the cash resources it needs to survive and prosper.

Together, the revenue budget, expense budget and cash budget comprise the budget. This is the plan approved by the board; the company reports monthly and quarterly results compared to this budget.

The budget, once approved, never changes. But the world does change.

Best practice forecasting uses the same 30 percent/50 percent/70 percent probabilities as the budget, updated with new information. For instance, after Q1, the full year cash forecast will include Q1 actuals, plus an updated Q2-Q4 forecast based on all newly available information and judgments, with an updated reserve to reach a 70 percent probability of achievement.

Best practice sales executives’ bonuses are based on achieving their sales plans. Sales plans will not be achieved every year.

Nevertheless, top quality sales leaders will achieve their plans often enough and, when they do, are likely to be the highest paid executives in the company. Bonus formulas are ramped, so sales leaders are paid well whenever they grow new revenue quickly, even if they fall short of their sales plans.

In much the same way, marketing executives’ bonuses are based on achieving their marketing plans.

Don’t be surprised if you learn your board members have widely varying probability expectations.

Often, the cash budget part of the bonus is adjusted to account for extra investments specifically approved by the board of directors during the course of the year.

We’ve seen quite a number of budgets with reasonable revenue budgets for Q1 and Q2, with a little extra revenue thrown in at Q3 and a big jump in Q4. After all, companies often budget to ramp up hiring and marketing investments early in the year, hoping they will pay off by Q4.

Companies that achieve their revenue budgets in Q1 through Q3 and miss in Q4 may even feel they’re planning effectively by achieving budget in three out of four, or 75 percent, of the quarters.

Leaders and boards of directors who believe this are deceiving themselves. The most important revenue of the year is the revenue run-rate at year-end, which establishes the base for recurring revenue the following year.

Many companies sign binding agreements with customers in one period which lead to material revenue in later periods. In this case, “bookings” becomes the key metric instead of “new revenue.”

As companies prepare to go public, they add another key metric: Wall Street guidance. Guidance is typically more conservative than the budget. According to JP Morgan’s analysis of 203 recent technology IPOs, companies achieved their first and second quarter post-IPO revenue “Street estimates” (which are based on guidance) more than 90 percent of the time.

When Credit Suisse reviewed 534 technology companies that went public since 2005, they found that companies achieved their revenue “Street estimates” 73 percent of the time.

We recommend that CFOs explore several budget scenarios with their CEOs — and specifically discuss probabilities of various outcomes.

It’s especially important to have the probability discussion with your board. You may even want to survey the board before the discussion, to determine their probability expectations for meeting revenue and cash budgets.

Don’t be surprised if you learn your board members have widely varying probability expectations. If so, it’s even more important to discuss this with your board and to reach agreement on the optimal budget probability for your company. 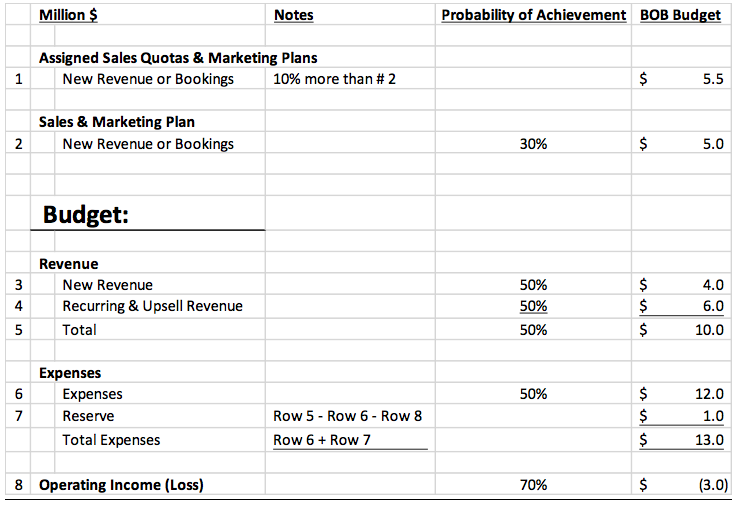 Thank you to JP Morgan and Credit Suisse for their review and analysis of public company performance compared to Wall Street guidance.