Since its bouncy debut, Square’s stock has remained relatively stable. This can be attributed to many factors, but the underlying predictability of its payments processing business is a big pillar of that. Before Square was public, it was unable (or unwilling) to disclose the relatively smooth arcs that transcribe its growth potential.

That potential, of course, is still potential — the company is not yet profitable — but it does allow people to move on to other interesting questions. One of those is how Square, originally positioned as the champion of the independent seller, will allow its merchants to scale up in size and complexity without having to move off of Square and onto a traditional payments processor. This question, more than most, is the existential dilemma that Square will have to solve if it’s going to scale along with its user base while avoiding strategically-beneficial-but-ultimately-costly tie-ups like its Starbucks deal.

One component of Square’s efforts to do just that, to keep sellers in the fold as they grow, is its App Marketplace. Launched a year ago, it’s a catalog of apps and solutions that integrate with Square. Tasks like accounting, inventory, e-commerce and invoicing are represented by companies like Bigcommerce, Shopventory, Weebly and Xero.

Today, Square is announcing that the App Marketplace has seen 100,000 sellers connected, a number that has doubled since January of last year. Connecting to the App Marketplace is an explicit action that a seller takes, via a sign-up flow in their seller Dashboard. It also acts as a portal for new signups, guiding people interested in using a particular tool through the process of signing up for Square.

Square says that the average seller connected to the App Marketplace is 3x larger than the average Square seller based on volume of transactions. Whether that’s a chicken or an egg, it speaks to the effect that Square wants to have on its seller base. Simply put: if a seller starts a business on Square, there is no reason it should ever need to switch off of Square.

In order to make that a possibility, Square needs to grease the wheels to make it easy for businesses to handle complex problems that come along with getting bigger. When you expand from one retail location to 10 in five years, you need much more nuanced inventory and accounting systems. A simple Square report isn’t going to be enough. By closely vetting the apps and integrations that get put on the App Marketplace, Square is able to ensure that the experiences are good and that the needs of its sellers are being met. Person-to-person feedback and seller data are used to determine the best integrations to pursue. 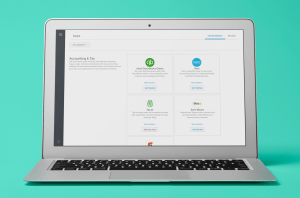 Jessica Shalek, Head of Business Development and lead on App Marketplace, says that in the US, accounting is the biggest category for growing businesses. She notes that both QuickBooks and Bigcommerce also recently shipped updates for their Square integration — leading indicators that the companies are finding it worthwhile to support Square.

Nate Stewart of Bigcommerce says that Square’s ‘modern’ API allowed the company to build the integration while also modernizing its own system. The integration has also gone very smoothly, with Square adding features it needed on-demand and customers enabling the integration without major issues. “We’re not doing a lot of support volume, which usually doesn’t happen,” says Stewart.

The tools in the App Marketplace, says Shalek, are chosen using a variety of signals including the size of sellers, their verticals, the pain points that they may have.

One of the biggest things you can do for a small business is to give them hours of time back. Especially when a seller may be running a shop alone or within a family unit. The early-to-middle-life businesses that Square has traditionally patronized should be well served by someone else doing the vetting on integrations and effectiveness. When every moment you spend on accounting or researching tools or implementing them is either stealing time from selling or being with your family, this could have a huge impact.

There is also the matter of localized tools and individual needs. Shalek points out one of her favorite App Marketplace integrations — a digital restaurant kitchen display system called Fresh KDS that allows a restaurant to see orders in real-time. Sign up for $10 bucks, install it on a tablet and connect it to your Square account and any order made via register automatically shoot to the kitchen. This was a need, she says, that Square wasn’t aware that their sellers had until they asked. Now, there’s a tool in the App Marketplace that just works.

It also stands to reason that, by researching and helping to implement more and more integrations across a variety of strata of ecommerce tools, Square is also building up a nice set of data about what it might want to build next. Think of it as sentiment analytics for business tools.

The question will be whether Square can keep the interest of sellers in later stages of their business. Support from QuickBooks, Xero and Bigcommerce are good starts, but big sales tool integrations, large firm accounting software like Intacct, SAP and more would be good ways to continue. Not to mention inventory systems like Visco and Sage. Because the natural extension of this ‘provide small sellers with a tools-based growth path’ strategy is, of course, to court large sellers with ready-made integrations that they can vet and implement within days or weeks rather than months or years. Yes, hands on work will likely be involved with any big client Square courts, but having the nuts and bolts of it done makes a lot of sense.