Finally, entrepreneurs in the Middle East have reason to feel good.

For years, men and women who launched startups in Amman, Beirut, Cairo, and Dubai struggled, because these places lacked the support networks and the ecosystem to help guide and scale up their ventures, much less turn the region into a viable destination for venture capital money.

But at an event in Cairo this month it became clear that their struggles, while not completely over, are beginning to lessen.

RiseUp brought together 4,000 entrepreneurs and investors to downtown Cairo for two days of panels, workshops, and networking.

The brainchild of Gehad Hussein, Muhammad Mansour, Con O’Donnell,  and Abdelhameed Sharara it has become more than just a startup event. In its third year, it has become a bellwether for the Middle East startup ecosystem, and a symbol of hope for economic progress in the region.

Hope is a hard thing to have, let alone hold on to, in the Middle East. Civil war in Syria, trouble in Iraq, and the rise of Islamic extremists who call themselves a “state” propel a negative narrative. Inept and often heavy-handed leaders exploit that to exert control.

Poverty, youth unemployment, corruption, and poor infrastructure are real. Egyptian unemployment hovers around 13.4 percent and around 38.9 percent among youth. Red tape strangles every aspect of daily life. All make it difficult to be an entrepreneur and, more importantly, and investor.

Yet it was the presence of the investors – in large numbers from both the region and beyond, including Silicon Valley – that indicated that entrepreneurship in the Middle East is more than just a feel-good effort. There are deals to be made in Egypt and beyond.

The presence of many regional investment firms and a number of international investors such as Intel Capital, the International Finance Corporation, Oak Investment Partners, Lumia Capital, 500 Startups and the Istanbul-based 212 is a milestone.

“Investors have been gradually coming here (to Egypt) because they see talent and the opportunity to make money,” said Ahmed Alfi, founder of Egypt’s first venture capital firm Sawari Ventures and the Cairo-based accelerator Flat6Labs.

After four decades in the United States as an investor and CEO, Alfi, who grew up in Egypt, returned to Cairo in 2006 to kick off this process. “I saw an opportunity to invest in great talented young people with businesses that we could add value to,” Alfi told me. Similarly, he said that he started Flat6Labs “to get more companies started; to help build more investment opportunities and developing our (Egypt’s) ecosystem.”

Sawari has invested between $250,000 and $1 million in nine companies. Much of that initial money came from Alfi himself. Earlier this year the firm announced that it was raising a second fund of $50 million. Flat6Labs has funded nearly 100 startups totaling $100 million.

In 2013, Alfi signed a 25-year lease for a space in an Islamic revival building that covers an entire block just down the street from Tahrir Square – the Greek Campus. The Greek Campus, Alfi envisioned, would serve as workspace for startups, a hub for Cairo’s tech community, and event space – events like RiseUp. 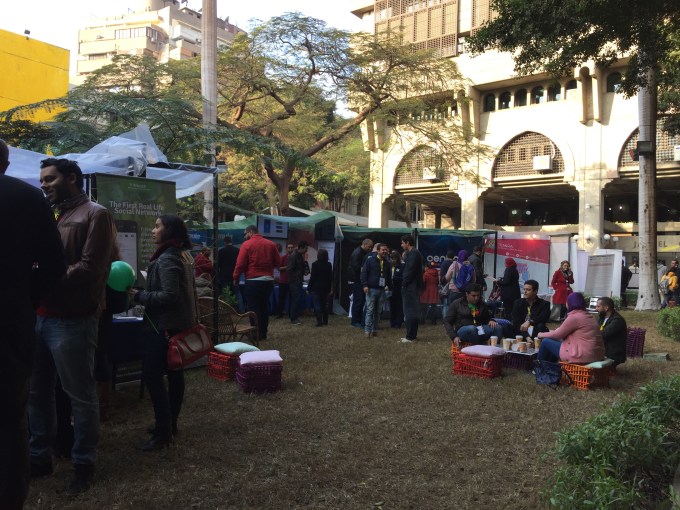 In past years Meguid noted that RiseUp investors were largely from Egypt or the greater Arab region. She called the presence of many regional investment firms and a number of international investors such as Intel Capital, the International Finance Corporation, Oak Investment Partners, Lumia Capital, 500 Startups and the Istanbul-based 212, a “milestone.”

Meguid attributes that milestone to two factors. The first is exits, which she noted are still few and far between but nonetheless there. In 2011 Intel acquired 4G wireless tech firm SySDSoft. This past year Fawry, an electronic payment platform sold for $100 million.

Secondly, Meguid noted, Egypt, with a population of 82 million, is an attractive market. Where there are customers there is money. One of the first international investors to recognize Egypt’s potential is 500 Startups co-founder Dave McClure.

“I also think that Dave played a good role on bringing international awareness to Egypt and the region” she said. “In the U.S. when they talk global they only take about China or India not even Europe.” 500 Startups she noted has taken a great leap into emerging markets such as Egypt, paving the way for others in Silicon Valley.

500 Startups announced the launch of a $30 million fund in the Middle East and North Africa. It plans to make $50,000 to $100,000 investments in the region, with the option to go higher on follow on funding. “We could see 50 to a 100x outcomes,” McClure said during a panel at RiseUp. He noted that his firm is investing at valuations between $1 to $5 million dollars. “Can we see a $250 million exit in the Middle East. Yes, that’s very doable,” McClure said.

There are already several examples of exit that size in the region: in Turkey, food delivery startup Yemeksepti sold for $589 million last year. Another food takeaway service based in Kuwat,Talabat.com sold for $170 million in February. Last year, Souq.com, the Amazon of the Arab world,raised $75 million from South African based media giant Naspers at a $500 million valuation.

“We need to pay a lot of attention to exits and liquidity and do a lot of work to make exits happen when we can,” McClure said. Part of that work is expanding the type of capital available in the Middle East. There are a handful of accelerators and angel and seed funds. Series B or higher is harder to find in the region. Expanding the range of funds is critical.

Ahmed Alfi is optimistic that that expansion will come in 2016. “There will be larger investments in 2016 for sure,” he said. “You can be sure that big things are on their way for the region.