Since launching two years ago, Taiwan-based media startup The News Lens has gained a readership of five million readers a month by presenting a levelheaded alternative to the country’s scandal-obsessed newspapers. Now the site, which is backed by North Base Media and 500 Startups, hopes its focus on balanced news reports and analysis will help it gain an international readership.

The News Lens plans to focus building its readership in Hong Kong, where it already has an office, Southeast Asia before tackling mainland China. It’s also managed to build an audience of about 500,000 monthly visitors outside of Asia with its international portal, which has articles in English and Chinese.

Joey Chung, who founded The News Lens with current chief content officer Mario Yang, says The News Lens wants to become “the millennial voice for greater China.” This doesn’t mean that it only targets readers in their teens and twenties, but people who are most comfortable finding information from online sources.

Of course, The News Lens faces the same challenge that every other online media outlet does: figuring out how to stand out without resorting to clickbait. Current headlines on its international site include “Nobel Prize Laureate Suggests Taiwan To Levy Carbon Tax And Eliminate Nuclear Power” and “China Holds One-Fourth Of Imprisoned Journalists Worldwide,” which may seem dry, but are a refreshing change for people tired of the sensationalist headlines in many Taiwanese and Hong Kong news outlets.

The News Lens makes articles about heavy topics more accessible by including infographics, short boxes with summaries of the most important information, and audio narrations. Most of the sites videos are short—under two minutes long—and it also jumps onto new social media platforms as quickly as possible. For example, The News Lens official Line account, which it started three months ago, already has close to 10,000 followers.

Chung says The News Lens’ editorial mission will remain the same in each new country it enters.

“Our original idea for Taiwan, and for Hong Kong, where everything is even more politicized right now, is to be that platform where you feel safe from overtly biased or corporate agendas.” 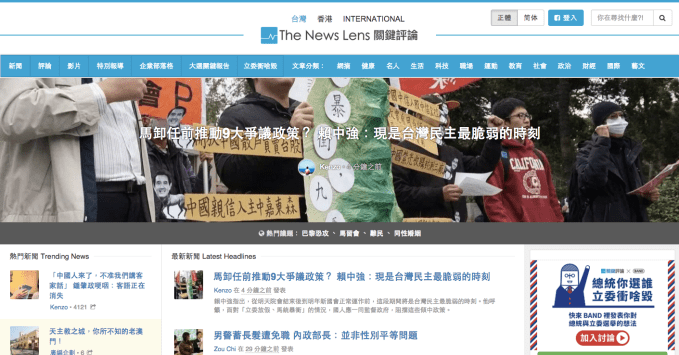 Out of The News Lens’ total of five million unique visitors each month, about 500,000 come from Hong Kong and 200,000 from Southeast Asia. Close to 500,000 are based in countries like the United States, United Kingdom, and Australia and consist mainly of Chinese-speaking expats. Hong Kong is currently The News Lens’ biggest priority and it plans to grow its office there, which launched six months ago. The startup’s goal is to increase its Hong Kong readership to about one to two million monthly active users before it begins to monetize through advertising and sponsored content. After its Hong Kong business stabilizes, The News Lens will launch a Southeast Asia office, most likely in Singapore.

About 70 percent of traffic to The News Lens comes from mobile devices. Its apps for Android and iOS launched two months ago and the next version of the site, which is scheduled to launch early next year, will be focused on making it easier to view and navigate on smartphones.

“Our new site won’t just be mobile friendly, it’ll be mobile first, and the new edition will be as mobile centered as possible, with automatic page loading and next page view articles. All that stuff will be a huge focus for us,” says Chung.

Like many other online media outlets, The News Lens is investing heavily in video, which it not only plays on its site and apps, but also on screens in public places, including malls and convenience stores, through partnerships with digital advertising companies. The News Lens’ goal is to eventually have video, including live streams, interviews, and in-depth reports, account for about 30 percent of all traffic on The News Lens, up from about 10 percent currently.

The News Lens plans to raise a Series B next year to support its growth strategy, but it also faces an even more daunting challenge—curtails on media freedom in its target markets. In Hong Kong, journalists who are perceived to be pro-democracy are coming under increasing pressure, and many Southeast Asia countries, including Singapore, have laws designed to control media. The News Lens’ operations in those two regions may be a proving ground for its entrance into China, where journalists are subject to some of the most stringent monitoring in the world.

Chung concedes that The News Lens may eventually face pushback from government authorities as its profile increases, but hopes that its focus on presenting multiple points of view will help protect its independence.

“We’re not trying to be biased even if you don’t agree with an opinion,” Chung says. “Our Hong Kong staff is aware of gray areas and what to be careful of and what boundaries there are, but we don’t tell them what to do. I would say so far that we are seen as very rational, calm, and less controversial because we try to provide a balanced and fair perspective and to try to get as many viewpoints up there as possible.”