There are already plenty of large online learning companies — known as MOOCs; massive open online courses — that use the Internet to democratize education through distribution. Leadig lights Coursera ($146 million), Udemy ($113 million) and Udacity ($160 million) have collectively raised hundreds of millions of dollars, but one upstart is taking a different — mentor-led — approach.

Springboard, an India-U.S. company formerly known as SlideRule, has raised a $1.7 million seed round to accelerate its concept of learning through engagement with others. It has adopted individual mentors, who provide a weekly catch-up session with their students, while partnering with other MOOCs for course content, creating its own where it sees gaps in the market.

The company — which graduated the Microsoft Accelerator in Bangalore — started out as a search engine for online courses but, as Gautam Tambay, Springboard co-founder and CEO told TechCrunch, it pivoted when it found that users preferred pre-selected, curated lists of content to having to hunt it down for themselves. It then changed tack again.

“Last year [following the move to curation,] we found ourselves with many registered users, but we noticed that many wouldn’t complete their courses. We got on the phone with a [number of] users, and found out that people were missing some kind of human contact,” Tambay explained.

The realization led Springboard — which had been funded by friends, family and boostrapping — began thinking up ways to stimulate learning, opting to add mentors and a community element for real human interaction.

“Offering content alone is not education,” Tambay told us. “That’s like sending someone to a library and telling them to learn.”

Today, Springboard takes a slightly different approach the aforementioned MOOCs, each of which has turned into a giant in its own right. 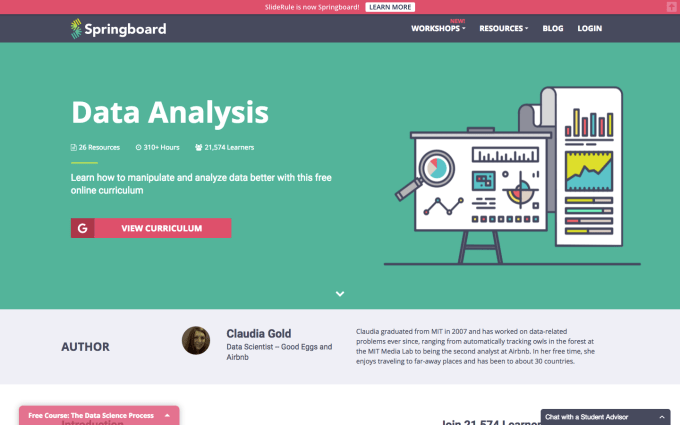 Rather than merely steering students through online courses, it puts the focus on practical skills and evidence of learnings to help advance their careers. Tambay admits also that Springboard courses are more expensive than others.

“Our data science course, for example, costs $500 per month and lasts for three months. It is self-paced, but most working professionals (who are our primarily audience) will take three months to get through it [alongside their job].

We give certifications that can be displayed on LinkedIn, but the main outcome is a final portfolio project. [Our students] can take that to prospective employers who, especially in tech and progressive companies, tend to look at work products as a sign of how good a candidate is, rather than degree.”

To date, 1,000 students have ‘graduated’ Springboard, with some going on to take jobs at Boeing, Reddit and IBM, among other companies.

The startup’s mentor network boasts over 100 figures, each of which is compensated for their time, but Tambay believes that the motivation isn’t primarily financial.

“Many want to give back but traditional education hasn’t given them a chance to,” he explained.

Tambay said the money raised will be used to increase capacity of Springboard’s courses — which he said quickly reach that capacity right now — and to launch new courses and build out additional services.

He hopes that the company will service 10-times more students this time next year, and in order to reach goal, he said the team will need to grow from its current number of nine. That figure is likely to jump to 15 over the next six months, and even higher thereafter.

“As the tech industry grows, employers can’t hire fast enough for roles like Data Scientist and UX Designer, while at the same time young professionals struggle to find affordable, effective ways to obtain the skills to advance their careers,” Tambay said in summary.

“We’re addressing these problems by offering something truly impactful for the first time — an incredibly personalized education, at an affordable price.”