The people want what they want and they want bigger phones. Apple’s sales record has been gangbusters since the introduction of its larger iPhone 6, 6 Plus and iPhone 6s phones. Samsung also offers several bigger phones, as do LG, Motorola and many others. Apple and Samsung take up the lion’s share with 66 percent of the market, much of it with the new bigger smartphone products.

But there’s a downside to these bigger phones – it’s harder to reach all the buttons on our apps with just one hand.

The Lyft UI team decided to do something about that and today launched a newly designed app that aims to make it easier for those of us with these super-sized hand computers to click through with just one appendage. 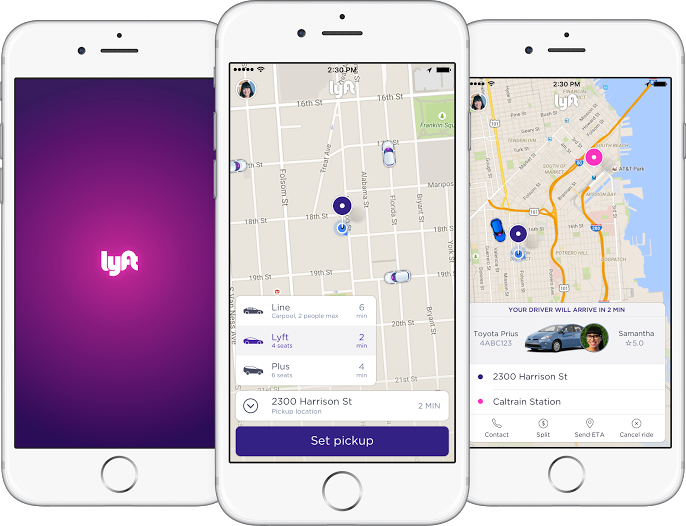 Passengers are now able to more easily access features like price estimators, split rides and contacting the driver within reach on the main screen. The hope is this will make the app more ergonomic for the user with a big phone.

Lyft also added some jewel toned colors to the app to compliment its signature hot pink and ginned up a new design flow that aims to offer riders more choice in the kind of commute they need. For example, early morning passengers most likely need to be on time, whereas that might not be the case if it’s around 5 p.m. and they are headed to grab a drink with a friend.

Lyft gives a range of pricing and arrival time options, depending on which sort of ride you choose (Line, regular or Plus).

It hasn’t been clear how much longer Lyft Line would take vs. how fast one might arrive somewhere if they took the regular Lyft option. I usually assume it’s faster with the latter, but now Lyft promises to offer riders a more transparent choice in time and price estimates.

This portion of the redesign came about to help engender trust from the people who use the app, according to Lyft co-founder John Zimmer. “Think about all the little touch points we have to create a more delightful experience,” he said.

Estimates is the key here, though. I was able to test the app over the last couple of days. The experience is pretty similar to what it was before, you click, choose which ride you want and a car comes, but with a few tweaks to make it easier to reach key features on the main menu.

The time and price offered is not on the dot, however. Instead, you will see a range of the estimated time of arrival and a range in cost for each ride choice. Lyft will also be able to tailor those steps in the process, depending on what you need – including personalized features like the addition of a car seat option according to Lyft’s VP of product Tali Rappaport.

You’ll also be able to share your commute so others will see how close you are to your destination and Lyft’s commuter option – a somewhat new carpooling service the ridesharing platform offers for those going to and from work – will eventually start to surface in the app, along with the other ride options, too.

Lyft claims there are more than 1.3 billion commute rides per week in the U.S. and 87 percent of those rides are drivers who are alone in their cars – though some of those commuters might also be getting to work by bicycle instead of car, according to the U.S. Census.

The effort to provide greater transparency is part of Lyft’s plan to solve transportation issues for all those commuters, make a greater environmental impact and take more cars off the road, according to the company. Will riders appreciate the new design? I liked it but it didn’t overwhelm me with feels. Pull out your ginormous phone and try it yourself, then let us know what you’d like to see Lyft do with its app design in the comments below.