A number of apps today let you check prices and comparison shop for things like clothing, electronics, toys, housewares, and more, but what about your everyday purchases, like groceries? Does your local store, Amazon, or Jet.com have the best deal on diapers? Is your favorite cereal cheaper this week at Target or Walgreens? A new mobile application called Basket wants to bring the same level of price transparency to consumers’ weekly grocery shopping trips, while also helping them find unadvertised sales on their favorite products.

The startup was founded by early Waze employee Andy Ellwood, and Neil Kataria, the founder of newBrandAnalytics (sold to Sprinklr).

The idea came about after Kataria, a father of three, began wondering if he was really getting the best savings when he ordered items online from Amazon and Diapers.com, or if he could have saved more by shopping locally. As he began to research the space, he realized that offline prices were actually more dynamic than he thought – they would vary by 30 to 40 percent, at times.

The challenge, then, was how this sort of data could be collected and provided to consumers in an easy-to-use format. After all, today’s price comparison apps only looked at advertised sales, and few target the grocery and CPG (consumer packaged goods) space.

That app paid users for performing certain tasks in-store, like scanning the barcodes on products and tracking pricing information. This allowed the startup to build a database of historical pricing data, identify pricing trends, and better learn when they needed to have their users go back out into the field on new “missions” to update items’ prices.

StockUp grew its user base to around 20 to 50 community members per metro area across the U.S., before the company shuttered the app to newcomers. It still relies on the app’s community, however, to track prices, but has now introduced a machine learning element to collect data more intelligently.

All this was in preparation for Basket, whose app hides away the big backend data business the company had quietly built up over the past year and a half.

With Basket, you search for your favorite grocery items and then add them to your “basket” in the app. The app will show you what nearby stores have the items available and for how much, and you can see where you’ll find the best price on that item. You can also use the app to search for the current prices at your preferred store – something that could come in handy for the extreme couponing crowd.

“The reason we want to start with grocery and CPG is that it’s such a frequent purchase…the average family goes [grocery shopping] 3.2 times per week,” explains Ellwood. Some of these trips are the big weekly shopping expedition, while others are smaller trips for special needs. “Basket is the app you can open for each of those trips – not just the big, consumer electronics purchase or the fall wardrobe purchase,” he adds.

“A lot of the innovation in the grocery space over the past few years has been, ‘can you get me the product faster?’,” Ellwood continues, referring to services like Amazon Prime Now, Instacart, and others. “That’s interesting, but that’s not necessarily the problem a lot of folks have,” he says.

Basket was built for the mainstream user who favors savings over convenience. 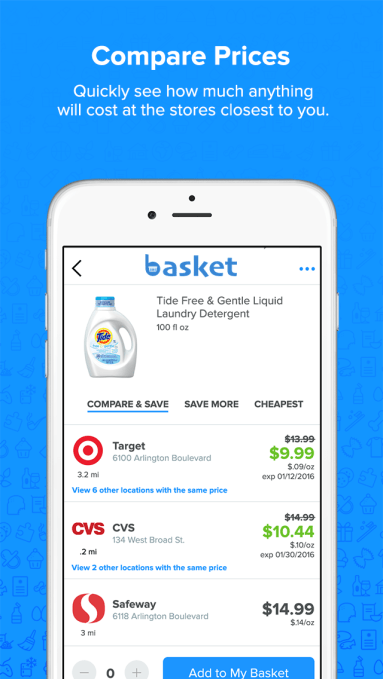 The app, now live for everyone on iOS and Android, currently tracks prices on over a million items at over 165,000 stores across the U.S., including big names like Walmart, Target, CVS, Walgreens, Sam’s Club, Whole Foods, the large grocery chains, dollar stores, and more. It’s also adding support for online stores like Amazon, Jet.com, and Diapers.com.

Basket is somewhat easy to use, but falls short on making your pricing research a little more actionable, I found. It would be nice if the app provided automatically updated lists per store you could view with just a tap that showed the nearby retailers that have your favorite products available for the best price that day. As it stands now, Basket hasn’t quite figured out how best to present all the data it has under the hood. It feels more like a research tool, which means it will have to compete with apps like Favado and Southern Savers, which are popular among couponers.

Basket is backed by an undisclosed amount of seed funding and is raising its Series A. Investors include Enicic Ventures; The Entrepreneurs’ Fund; Goldman Sachs’ President Gary Cohn; Passport Capital; and ITA Software co-founder Dave Baggett.