LinkedIn, a social network focused around the working world with nearly 400 million members, is well known for how it uses algorithms to suggest potential business connections and jobs based on your profile. Now, it’s injecting more data analytics into another part of its platform: job listings.

Today LinkedIn is taking the wraps off a new version of its Jobs section, where — alongside details about the job itself — you can now see more data about the company, who works there, and how you compare to previous applicants.

The new look will be rolled out to 10% of LinkedIn’s English audience today, covering the U.S., Canada, India, the UK and Australia. A LinkedIn spokesperson says it will be expanding deeper into that base, as well as to other regions internationally, early next year. Pricing for job listings remains the same.

You can think of LinkedIn’s revamped jobs listings as a complement to the other side of the hiring coin: LinkedIn recently made a big upgrade of its recruitment products as well, also with a much bigger use of its wider database of people.

For LinkedIn, the thinking seems to be that creating a better job hunting experience could lead to the feature being used more. And in turn, that could lead more employers to paying to post listings in the first place (or so LinkedIn hopes).

And given that there are dozens of places online to look for jobs today, LinkedIn understands that it needs to go beyond the basics in order to stand out.

The new features include a chance to look at profiles of existing employees at the company who hold similar jobs, and potentially connect with them. You can also see who in your network is connected through to the company.

Premium features, which LinkedIn restricts to users of its Premium tier, will give more insights about the company and wider hiring policies: company’s growth rate, average tenure, and top schools and companies it hires from “so that you can determine if a company is truly the right fit for you.” 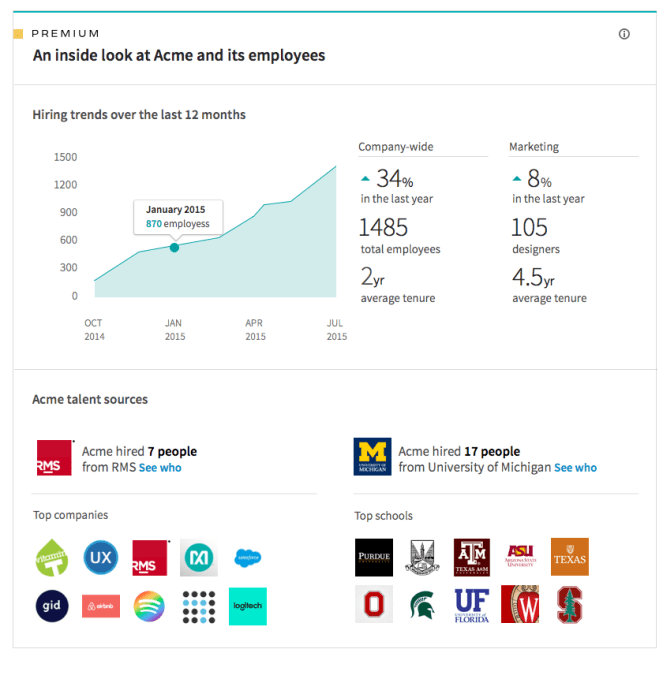 LinkedIn says that individuals can opt-out of being featured in a “Meet the Team” carousel by turning on or off the “Meet the Team” setting in his/her privacy controls. Also if you have opted to make your profile visible to no one, you are automatically opted out of Meet the Team.

The bigger picture with LinkedIn is that the company is trying to build out a much stronger platform, using its existing strength in big data and sheer number of data points.

Now it’s increasingly putting these features out front for the public to use, as a way to grow the amount of usage of its services, and to drive more revenues. Other areas where it’s doing the same include revamping existing areas like “who’s viewed your profile” and “who’s viewed your posts” but also in other newer areas, such as in the company’s suite of mobile apps, which have been completely redesigned with more “anticipatory” features.