It seems Apple is continuing to use the App Store’s “Top Charts” section to promote its own applications, by allowing apps like iMovie and those from its iWork suite to appear in the Top 10 Free apps on users’ iPhones. This gives the appearance that Apple’s own apps among the most popular and most-downloaded in the U.S. App Store – even more popular than apps like Facebook or Instagram, for example. But it’s unclear if this is actually the case.

Has Apple effectively turned its App Store’s Top Charts section into a way to market its own software – stealing the top ranks from deserving developers in the process? Or are Apple’s own apps, in reality, the most popular apps in the store and Apple pulls them out of the Top Charts as a means of suppressing this information, in order to give the spots to third-party developers?

Regardless of the answer, the apps’ seemingly magical appearance then disappearance from the Top Charts over the course of a day calls into question the legitimacy and accuracy of Apple’s rankings system altogether.

This is not a new problem, unfortunately. The app store optimization firm Sensor Tower began investigating this same behavior in November, noting that apps like Numbers, Pages, Keynote and others were suddenly appearing in the Top 10 in the App Store’s Top Free Charts on the iPhone.

At the time, however, it wasn’t entirely clear if Apple was simply running a test of some sort, or if its Top Charts were experiencing a bug. (Apple declined to comment on why the apps had appeared in the top rankings.)

Yesterday, however, we spotted the same thing happening again – indicating that this is not a one-time bug, but more likely a manipulation of the Top Chart ranking data. 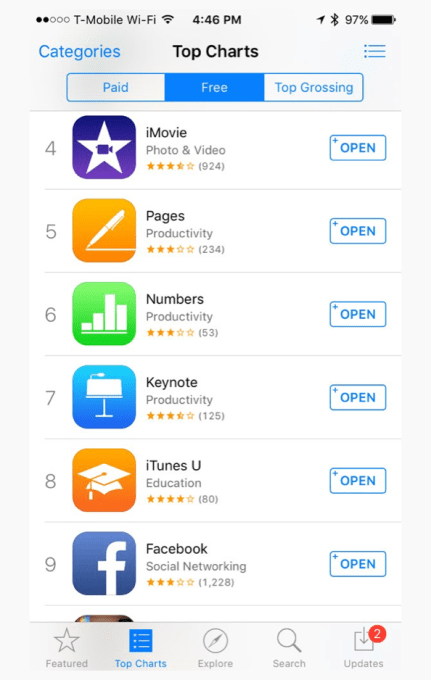 In the Top 10 Free Apps on the iPhone’s App Store, the number 4 through number 8 positions – out of the blue – went to Apple’s own software applications. In order, the #4 through #8 spots were given to iMovie, Pages, Numbers, Keynote, and iTunes U. These apps were ranking higher than Facebook and Instagram for the day.

Only a day later, and these same apps are not only gone from the Top 10, they’re gone from the Top 144 Free applications that Apple displays on the iPhone’s App Store. The exception is iTunes U, which continues to rank highly. (At the time of writing, it’s #6.) 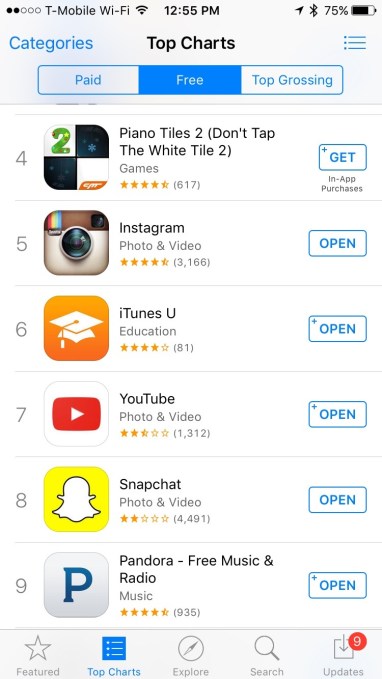 To put it more simply: it’s highly, highly unusual for an app to be ranked as one of the Top 10 Free apps in the U.S. App Store one day, then hours later drop out of the Top Charts altogether.

Any other third-party app that demonstrated such a pattern would be accused of buying installs or somehow manipulating the rankings to its advantage. But Apple seems to believe that this same bizarre behavior when it comes to its own apps won’t be questioned?

This is an ongoing problem, as it turns out. These apps have actually been popping in and out of the App Store’s Top Charts for several days now.

This occurs even though the apps themselves don’t appear in some of the feeds that app store analytics firms use to access ranking data. In fact, Apple’s own apps are the only ones that sometimes appear in the Top Charts on users’ devices even though they don’t appear in some of Apple’s Top Charts feeds. (App Annie, for what’s it’s worth, shows these apps are consistently highly ranked…But are they really when that same data isn’t reflected on end users’ devices? Who knows.)

Another firm, appFigures, pulled today’s ranking data for the iWork apps and found that neither Pages, Numbers or Keynote were ranking for anything other than the “Productivity” category on iPhone.

In fact, the Pages chart shows that Apple’s Microsoft Word competitor had actually dipped in its category over the past few days – which is not what you would expect from a supposedly Top 10 application. Was Apple attempting to stem the app’s decline? Or is Apple’s data just a mess?

(AppFigures explains that Apple has a variety of feeds available, each with its own set of issues. It uses the one that it believes represents the store most accurately, which also includes app bundles. That’s one reason its feeds could vary from those App Annie uses.)

Apple’s Top Charts have always been something of a black box for developers. No one knows exactly how Apple’s algorithm works, other than it takes into account some combination of downloads and velocity – or for Top Grossing applications, revenue. That means that it’s possible that Apple is experimenting with changes to that algorithm that would look beyond these metrics. Perhaps it’s even testing it out with its own apps first.

It’s also worth pointing out that the apps in question are odd in and of themselves because they are listed as paid applications, but are actually available for free to most users. So they would make an appearance on the Free charts, if they became trending. Apple announced some time ago that iMovie, GarageBand, Pages, Numbers, Keynote and iTunes U would be free for those who activated or purchased a device on or after September 1, 2013 running iOS 8. Apple has since rolled out iOS 9, and the same deal still applies – the apps are free on iOS 9 devices activated on or after the same date.

Apple won’t explain how its algorithm works, of course, but when Apple’s own software appears one day at the very top of the App Store then disappears entirely the next day, you know that something that not entirely above-the-board is going on.