Korea’s Yello Mobile has made a name for itself raising $100 million and using it to hoover up more than 80 startups to build its mobile apps business, which now serves 18 million users. Now, Yello Mobile is raising again: it has racked up another $47.2 million in financing, led by existing investor Formation 8. The funding comes as convertible debt at a $4 billion valuation.

TechCrunch also understands that another tranche of funding, up to or around double the amount of this raise, will be closed likely by the end of this year, at the same valuation.

(We’d actually heard earlier this year that Yello Mobile was raising money, and so this $47.2 million may have actually closed some months ago but is only getting announced now. To date, the company has raised just under $210 million.)

“We are proud of the progress we have made establishing Yello Mobile as the clear mobile leader across the SMATO verticals,” said Lee Sang-hyuk, founder and CEO of Yello Mobile, in a statement. (‘SMATO’ is a reference to ‘Shopping, Media, AdTech, Travel, and Offline-to-online’ and is how Yello reports on its business progress.) “Our two leading apps, Coocha and Pikicast, continue to see strong user growth and increasing monetization, and we look forward to using this new capital to drive continued growth in those.”

The valuation makes Yello one of Korea’s most valuable startups — but not the most valuable of all. That title remains with Coupang, the $5 billion e-commerce marketplace backed by the likes of SoftBank and Sequoia.

But for all the big numbers, Yello’s value seems to be based on potential returns rather than the present state of affairs. Q4 numbers have not yet been reported but in Q3 the company said it made 97.5 billion won ($82 million) in revenues.

Going forward, Yello expects to be Ebidta-positive in all but the digital media segment in Q4. That is intentional, from what we understand: Yello is currently more focused on building its audience for entertainment services, before offering ads against it (which makes sense, since ads work on an economy of scale basis). 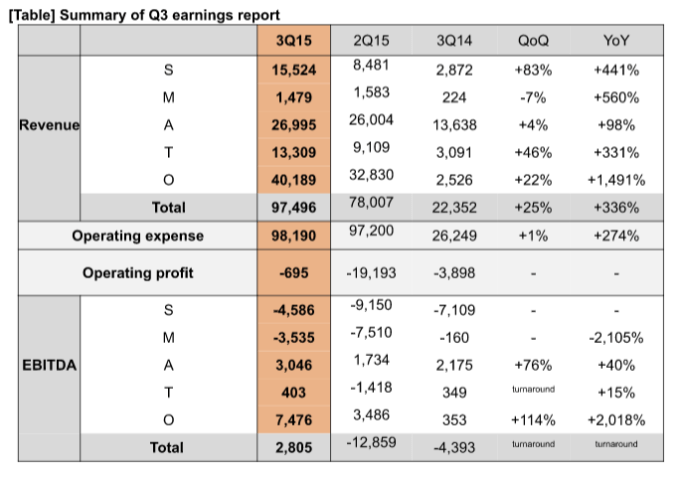 As you may have seen, Formation 8 is not raising any more funds, with its founding partners now going their own ways with their own independent efforts. To be clear, this latest Yello Mobile capital injection comes from Formation 8’s last (second) fund. It also has several of Formation 8’s limited partners participating directly.

The next tranche is likely also to include strategics from China and Japan. We are still working out who these might be but there are a number of companies, including the likes of Tencent, Alibaba and SoftBank, who have strong apps businesses and prolific investment strategies.

While Yello has bought a ton of smaller mobile companies, more recently it has turned its attention to integrating them and building out the bigger platform business.

Today, that wider platform has five different areas of operations: e-commerce, digital entertainment, online marketing, data analytics and “O2O” (that is, tech and apps that facilitate offline-to-online transactions, be they financial or otherwise). Travel is one large segment of the company’s business that stretches across several of these.

Many of the brands and apps run by Yello won’t be household names to the average reader in a market like the U.S. or Europe, but they have some decent traction in Korea, with one-third of the country’s population using one or another of Yello’s apps, as well as some growth in South-East Asia.

Those apps include Coocha, a shopping search app, and Pikicast, a digital media content platform. Coocha has 8 million monthly active users, the company says, growing 216% over last year. Pikicast has an average daily duration time second only to Facebook among media apps in Korea, the company says, and ahead of Instagram.

The plan will be to expand the footprint starting first in Asia, with a lot of opportunity in adjacent markets like China and Japan to build Yello’s traction outside of its home turf before looking further afield.