A lot of local discovery apps are great at telling you what’s been popular in an area for years, but they aren’t so great at helping you find the cool speakeasy that opened up last Tuesday.

Membo is a bit of a fusion between neighborhood social networking apps like Nextdoor and local discussion apps like Yik Yak. The service has been letting users chat about their latest favorite bars and restaurants (as well as other stuff happening in their community) since its web app launched last year. Now the company is ready to grow more rapidly after making its long overdue shift to mobile via its iOS app which was released last month.

The app looks to make the concept of community a bit more fluid than other apps have. While following Yik Yak’s radial local discussion, it also strips away the anonymity and adds user profiles in to allow long-term connections.

The app is split into three main sections: Pules, Shout and Spots. 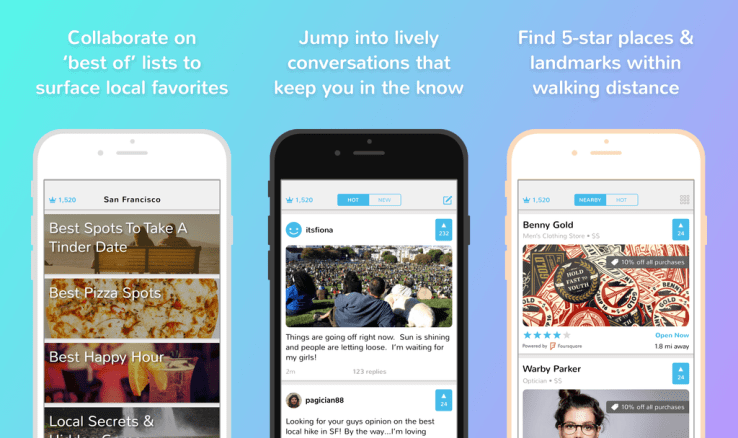 Pulse is where the bulk of community discussion takes place, housed within certain constantly updating topics and questions.

Shout is pretty much a Yik Yak clone tab acting as a spot for people to say anything, and I must say it’s interesting how much more helpful people are when their actual profiles are being used…

Spots is a bit more straightforward. A “Nearby” tab amasses local spots from Foursquare and let’s you check what people have upvoted by navigating over to the “Hot” tab.

All hail the upvote

Membo democratizes local suggestion to keep things a bit more in the moment and trendy. While searching the best-reviewed cocktail lounges in SF every so often on Yelp will return similar results each time, the team at Membo hopes that users will be able to discover up-and-coming spots much sooner while simultaneously fostering connections with the other users they’re chatting with.

A big part of this discovery is the Yik Yak/ Reddit/ Internet style upvoting system that Membo has prioritized. Basically, Membo has a number of questions/topic categorizations in the Pulse section that users can post responses in. One asks the “Best Spots To Take A Tinder Date” while others focus less on local discovery and more on community discussion and involvement like the “As Mayor I Would…” Pulse topic.

Membo CEO and co-founder Will Reeves says that right now the community is intimate enough on the app that users are actually using it to form new connections.

“Sections titled ‘best happy hours in the area’ actually lead to happy hours that our users are meeting up at,” said Reeves.

Right now Membo has pretty much only reached saturation in a few SF neighborhoods, the team also said that they were looking to tackle college campuses soon but said that the town square style networking that neighborhoods offered best is the style they wanted to launch with.

One of the challenges the team anticipated by weighing the app’s location-based filtering system against really fostering a community was that visiting users may roll into the Mission in SF and continue asking where the best place was to get a great burrito time and time again. With Pulse and Shout balancing each other out, the team hopes that visitors to an area can quickly get their most common questions answered by already-posted Pulse feeds and leave Shout for more nuanced requests or opinions, allowing the sense of community to be maintained there.

Right now Membo is still getting completely situated as they’ve just recently migrated from their web app, but they’re also looking to quickly get Android users in on the experience so that they can foster as many connections as possible and get people exposed to cool stuff.

“Our overall goal is that wherever you are, you can use this as a place to surface the most interesting things you haven’t heard of,” said Reeves.