“Supplier management” probably doesn’t sound like the most exciting problem for a startup to solve, but Lystable could actually be doing something crucial for its customers. As businesses find themselves relying on an “external workforce” of freelancers and vendors, Lystable helps them manage those relationships.

The TechStars-incubated company just finished its on-stage presentation at Disrupt London. We first wrote about Lystable earlier this year, and today it’s launching a new website and opening up to more customers. It’s also announcing that it has raised a total of $3.5 million in seed funding.

Johnston has worked at companies like Google and M&C Saatchi as a designer and manager. In several of those roles, he found himself spending more time working with freelancers and agencies than he did actually designing — eventually, he realized that this is a broad problem that’s causing “a lot of pain” for a lot of companies.

Johnston said most companies use spreadsheets to manage their freelancers, or customer databases like Salesforce.com — which kinda, sorta work, but weren’t really built for that purpose.

“A CRM has no rankings, no payments, no index and categories,” he told me. “But beyond that if you’re trying to scale up to using … 2,000 vendors per month, you need something that’s fit for purpose.” For example, let’s say TechCrunch wanted to hire a freelance photographer to take pictures at Disrupt. With Lystable, we could bring up a list of photographers we’ve worked with in the past, ranked by how our team members rated their skills. We could also browse sample photos, see who they’ve worked with at TechCrunch and even use message templates to reach out quickly and easily.

Lystable has built an equivalent product for the freelancers themselves, and for other suppliers, where they can “lyst” their services, accept jobs and request payment.

To be clear, Lystable isn’t meant to compete with “awesome product management software” like Basecamp, Johnston said. In fact, it allows users to import their project data from Basecamp into Lystable.

Nor is the company building a marketplace where businesses can find freelancers. Johnston acknowledged that customers sometimes ask for those types of features, but usually, they realize that their team already knows plenty of freelancers — they just don’t have a good way to “unearth the information.”

And while Johnston’s first example focused on publishers, he said that many types of companies need to manage freelancers and vendors, with Lystable being used by everyone from hospitals to law firms.

The company has been working directly with large enterprises (customers mentioned on-stage include Google and The Economist), but it’s now allowing small and medium businesses to sign up on more of a self-serve basis. The company is still experimenting with pricing — it’s a freemium model, though, with a basic version of the product available for free.

As for the funding, Johnston said it comes from Peter Thiel’s Valar Ventures, Toba Capital, Playfair Capital, Spring Partners and Backed VC. Among other things, the additional capital will allow Lystable to open a San Francisco office, though Johnston expects the core technical team to remain in London. 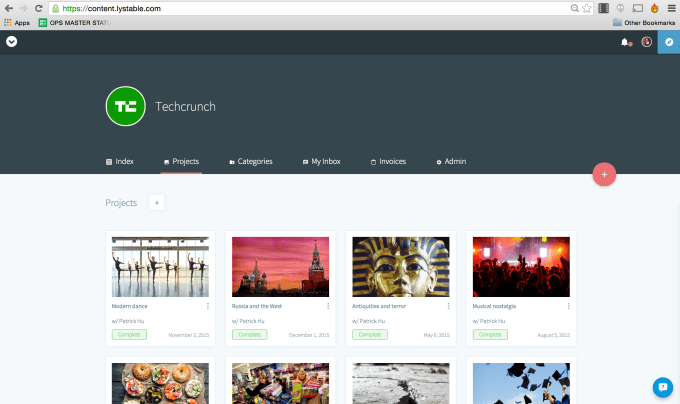 Q: Congratulations on those impressive customers. What’s the scale of implementation in each business?

A: It always starts with one team, then expands as information gets shared between teams. It can eventaully reach 500 customers in one company.

Q: Who is the buyer internally? And how long is the sales cycle?

A: The buyer changes from company to company. One thing they have in common is that they’re creating content online. The sales cycle is down to three months in some cases.

Q: What are your plans for the next 12 months?  Are you going to focus on a specific industry?

A: We just opened  an office in San Francisco, and we want to make sure the product stays “as agnostic as possible.”

Q: Who do your customers compare you to?

A: Workmarket.com, but they’re focused more on “traditional freelancer management.”

Q: Could you turn this into a marketplace to connect businesses and freelancers/vendors?

A: No plans right now, but we’re open to it.

Q: How different is this process from company to company?

A: It’s very similar, which is “why we’re focusing on a platform play.” Companies start to have more unique needs when you move into areas like hospitals.

Q: Do you handle payments yourself or integrate with existing payment systems?

A: We offer integration for now, partly because of the complications of “tackling a finance department in a big enterprise,” but we want to handle payments in the future.