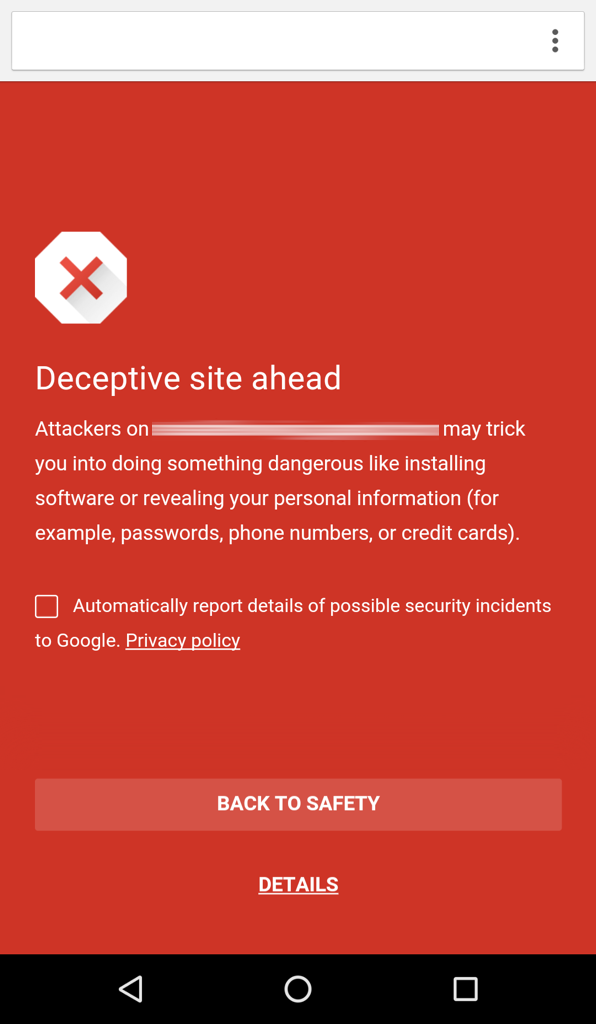 Until now, Safe Browsing was only available to desktop users, as well as for Chrome users on Android who turned on Google’s optional data compression service. Indeed, for those mobile users, Safe Browsing has already been enabled for almost two years.

So why did it take Google so long to enable this feature for all of its mobile users on Android? According to the company, it’s far harder to keep a long list of potentially harmful sites on a mobile device than on the desktop. With the data compression service, all your unencrypted web traffic is routed through Google’s servers, where Google can then easily check URLs against its blacklist. On mobile, it’s not that easy.

“Bytes are big: our mantra is that every single bit that Safe Browsing sends a mobile device must improve protection,” Google’s Safe Browsing team members Noé Lutz, Nathan Parker, and Stephan Somogyi said in today’s announcement. “Network bandwidth and battery are the scarcest resources on a mobile device, so we had to carefully rethink how to best protect mobile users. Some social engineering attacks only happen in certain parts of the world, so we only send information that protects devices in the geographic regions they’re in.”

Google says it made sure it didn’t just minimize network traffic but also optimized the service for low memory and processor usage.

With this update, Google says, the company is extending this protection to “hundreds of millions of Chrome users on Android” (there are a total of over 800 million mobile Chrome users, but that number also includes iOS users).

If you’re a Chrome user on Android, chances are you already use Safe Browsing. Google enabled this with its latest Google Play Services update. Chrome quietly started supporting it in version 46 (thanks to Google’s quick update cadence, the browser is now already on version 47). To check if you’re already using it, just head over to the Settings -> Privacy menu in Chrome on Android. Because it’s essentially a Google Play service, other browsers on the platform can also enable Safe Browsing for their users.

To make sure it’s working, head over to Google’s Safe Browsing test site.