Having all your content on TV is a bit like having all your money in oil: it’s still popular, but the next thing is coming and you better diversify. That’s why it’s so smart that talk show host Ellen DeGeneres set up her own Ellen Digital Ventures firm to bring her content and capital to new mediums beyond television.

Today, Ellen Digital Ventures announced that musician competition app Chosen will be its latest investment and partnership. Chosen will now feature Ellen’s Dance Off, a new contest where people can submit videos of themselves dancing and use Tinder-esque swipes to vote on who else is the best dancer. Starting with a freestyle dance off and a themed contest around Missy Elliot’s new song “WTF”, the top dancers in Chosen will be invited to strut their stuff on The Ellen DeGeneres Show.

Ellen is just the first to make their own game on Chosen, which will open up as a platform next year. That will allow anyone to pick a theme for people to compete around, from singing or dancing to extreme sports or comedy. 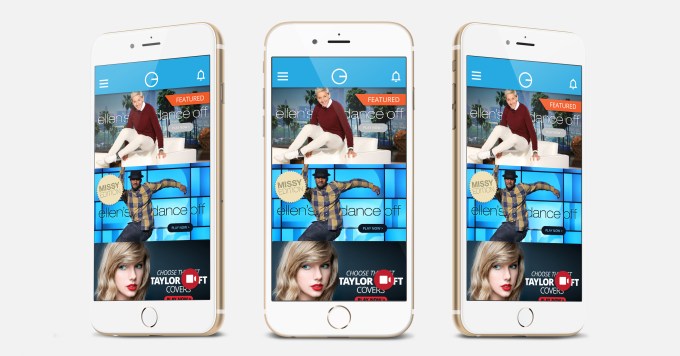 “We recognize people are consuming content on smaller and smaller screens and we want to be part of that”, says The Ellen DeGeneres Show producer Andy Lassner. Rather than sticking with its demographic of 25-54 year old women watching TV, Ellen Digital Ventures is helping the celebrities build a younger audience on the next medium: mobile. Producer Mary Connelly explains “The digital landscape is a new digital playground for our wildly creative staff.”

Chosen is Ellen Digital Ventures’ fourth big project. It launched the family-friendly YouTube alternative EllenTube last year to feature clips from her TV show plus exclusive content. And in October, Ellen launched Psych!, a party game where friends sit around trying to trick each other with fake trivia answers. Ellen first dove into mobile with her own game Heads Up! where players try guess the word on their own phone held against their head. 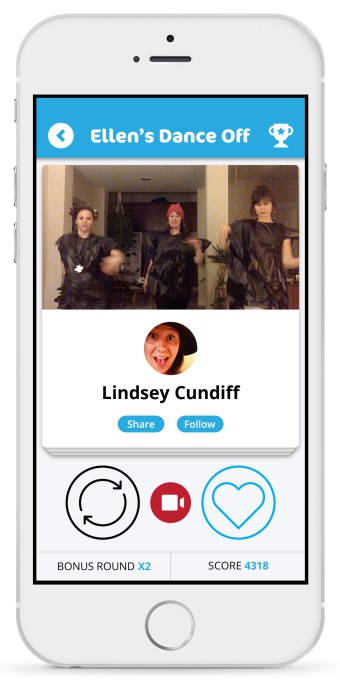 The investment of undisclosed size adds to the $6.5 million raised by Chosen from DCM, Rhodium, and CrunchFund [Disclosure: CrunchFund was started by TechCrunch’s founder].

Chosen’s American Idol-style app for iOS and Android launched a year ago to let people play by both performing or judging others. But to prep for the partnership with Ellen, Chosen has simplified its app and refocused on celebrating people’s submissions rather than harsh Simon Cowell-style critiques. Now instead of several confusing game types, Chosen has been boiled down to just performing and voting.

Chosen was founded by former Gracenote, MOG, and Beats Music CEO David Hyman. Now his entertainment industry connections have brought Chosen a powerful way to grow. Ellen will ask her viewers to submit dance videos through the app, and seeing people wild out on stage will surely inspire fans to hit record themselves.

The game is remarkably fun. Each swipe reveals a new dancer shaking it for your praise. It’s a rapid fire way to consume video that has legs long beyond the dance contest format. Simple and addictive, it adds movement to the static Tinder design people already love.

And since Ellen is all about positivity and there’s no way to leave mean comments like on YouTube, Chosen users can boogie without being bullied. You don’t even technically vote against people, but just refresh to see another clip.

The Ellen DeGeneres Show producer Ed Glavin concludes, “The crazier this world gets and the harder it is to turn on your TV and see something pleasant, the more important it is for us to be an escape.”