Silicon Valley efforts in the biology and health domains have recently seen increased public interest because of the questions around the legitimacy of Theranos’ technology and medical claims and the recent FDA approvals for a number of 23andMe’s genetic screens.

These data points are just two of the most visible examples of a broad ecosystem of companies and startups in Silicon Valley working on biological problems. This early “biohacking” ecosystem has a number of parallels with the personal computer (PC) ecosystem in the 1970s and 1980s.

A major accelerant for the PC revolution was the rise of different startups tackling the different layers of the PC stack — competition at each layer led to exponential innovation for the whole. Painting broadly, we can break that technology stack into two basic abstraction layers: hardware and software. There’s an emerging parallel developing in the biohacking world.

For hardware, instead of CPUs, disk storage and RAM and their associated APIs, biohackers have the “hardware” of wearables, genetic and blood tests and other tools to collect biological signals and their corresponding APIs to surface up this data in computable and queryable formats. Software and applications provided business and casual users a friendly interface to modulate state on their PCs. Biohackers today are already using “software” to modulate their mental, physical and biological states and/or alter their healthcare decisions.

The Hardware And API Layer

Early hobbyist computers were sold as project kits, something to be pieced and hacked together. To program the classic Altair 8800, for example, hobbyist hackers had to manually flip switches on a panel and the only included output was corresponding panel lights. They’d upgrade their boxes with add-on cards for paper tape storage and an interface to connect to a Teletype terminal.

The Apple-1, although it came with a fully assembled circuit board, required users to acquire their own power supplies and video displays. In short, hackers had to piece together systems and parts from different vendors and hack them together.

Biohackers and quantified-self enthusiasts today play with a growing set of siloed tools.  Mainstream wearables available today like Apple Watch and Fitbit are tracking heart rate and the number of footsteps taken.

The accelerant for software development on top of hardware was user-friendly APIs to access the capabilities of raw computing horsepower. And those APIs are emerging in the biohacking world. 23andMe is abstracting away the process of surfacing someone’s genome as basically an API for your genomic data.

Apple’s HealthKit and Fitbit’s APIs abstract away the difficulty in tapping the heart rate, sleep and other activities that their wearables are passively collecting. Companies like MyFitnessPal are testing an API for calorie tracking and the ratio of the macronutrients that one ingests. With our computing analogy in mind, there’s tremendous opportunity to API-ify more and more biological signals that are being generated by the human body that aren’t being captured today.

The Software And Application Layer

Biohacking hardware and tools have their power users, but perhaps aren’t yet super interesting to the mass market. Applications to uncover new insights and enable new behaviors is where relevancy emerges for the mass market. If we look at PCs, they really blossomed when killer applications like word processing, spreadsheets and games emerged. Biohacking companies are just starting to engage with modulation of the human hardware in novel ways, i.e., inducing biological states or changing and improving healthcare decisions.

23andMe’s carrier screens for some genetic diseases were recently approved by the FDA for people to self-serve. It’s perhaps not creating a novel capability, but it’s meaningful progress in the direction of arming end consumers with more information and control.

It’s early in biohacking and there will be some misfires — but that’s also how progress is made.

At more exploratory fronts, biohackers are regularly ingesting nootropics and food replacements to effect changes in their mental and physical states to extract more performance and efficiency out of their day. People are applying transcranial direct current stimulation devices on their heads in an attempt to modulate their mood. People are zapping themselves for negative reinforcement training to gain better habits.

These are just a few of the emerging applications on the human hardware. While existing efforts seem well-positioned to verticalize their offerings into more and more consumer-friendly and useful applications, there’s plenty of blue sky to engage. There’s not a lot of interoperability between them all, and biohackers have to piece everything together themselves.

Some of the challenges are right in Silicon Valley’s wheelhouse. Creating innovative products and user experiences for the mass market and ingesting massive amounts of data, analyzing and generating predictive and/or actionable recommendations from that data is what Silicon Valley is good at.

However, deeper thoughtfulness and rigor are required for operating on people’s health and healthcare decisions. Boiled down simply, the FDA is very careful (and rightly so) when a product might alter a person’s health and healthcare decisions. Anything of that sort is treated by regulators as a medical device, and medical devices have a very high bar of quality standards. This is the right standard for making medical claims; the industry cannot play fast and loose here.

There is some friction with the Silicon Valley modus operandi of moving quickly to arm the end consumers with more data and more information as opposed to the more traditional approach of requiring mediation by authorities. This doesn’t mean we don’t continue to try to move the world forward, but it does mean let’s do it in a way that bakes in guard rails from Day 1 to ultimately ensure we do no harm.

Most players today understand this and are thoughtful in proactively engaging health regulators and the broader science and research communities. It’s early in biohacking and there will be some misfires — but that’s also how progress is made. Much like how the hobbyist hackers birthed a plethora of iconic businesses, I predict there will be multiple unicorns to emerge in the biohacking space within the next five years. 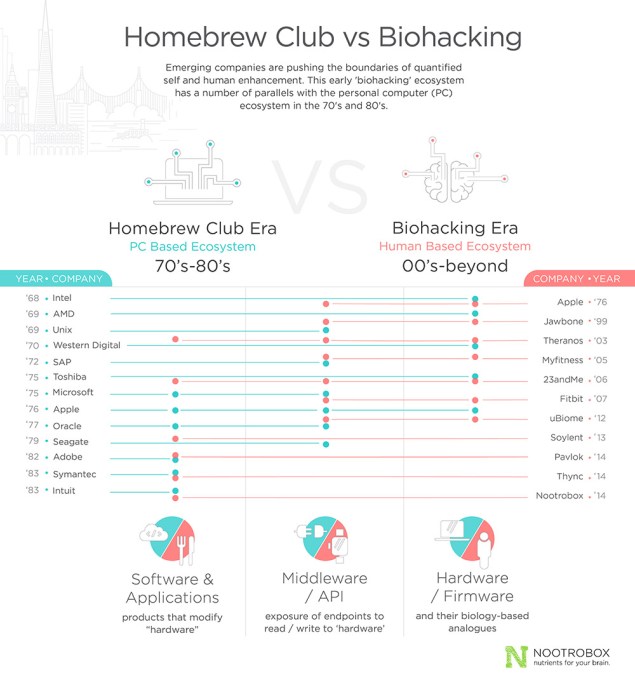