Microsoft today announced a large number of updates to its developer and DevOps tools and services at its Connect conference in New York. These range from a new free program for developers who are just getting started, all the way to a new subscription service, a marketplace for extensions, updates to .NET, and the renaming of Visual Studio Online.

This is the first major dev tools update at Microsoft after its developer division head S. ‘Soma’ Somasegar left the company after 27 years last month and the first one after Julia Liuson took over as the head of the Visual Studio Tools and .NET team. Liuson told me earlier this month that while there are quite a few updates here, the overall theme is that Microsoft wants to make sure that it has “great offerings available for any developer who wants to build code.”

To do this, the company is announcing both the free Visual Studio Dev Essentials program, which bundles many of the company’s free tools and services into one package (and next year it will add free Azure credits, too), as well as the new subscription program for Visual Studio.

As part of the Dev Essentials program, developers will get access to Visual Studio Community, Visual Studio Code, and Visual Studio Team Services, as well as training services from a number of partners, including Pluralsight, Wintellect and Xamarin.

There is little that’s controversial about this free program, but chances are there will be some discussion around Microsoft’s decision to start selling monthly and annual subscriptions to Visual Studio’s Professional and Enterprise editions (without access to its MSDN service, which is part of the existing subscription services Microsoft currently offers for a number of Visual Studio edition).

As Liuson told me, the idea here is to give freelancers, consultants and others who may have no need for a long-term commitment easier access to its development environment. Microsoft will continue to sell perpetual licenses for Visual Studio, but many will likely wonder whether this isn’t just a first step and Microsoft’s overall plan is to completely move Visual Studio to a subscription model (similar to what Adobe did with its Creative Cloud).

Pricing for Visual Studio Professional is currently set for $45/month (or $539/year) and the Enterprise edition will set you back $250/month (or $2,999/year). Annual plans include monthly Azure credits and access to dev/test software.

These subscriptions will be available in the newly launched Visual Studio Marketplace. The Marketplace, which is now in preview, will become the main hub for getting access to both free and paid Visual Studio extensions from both Microsoft itself and third-party vendors. 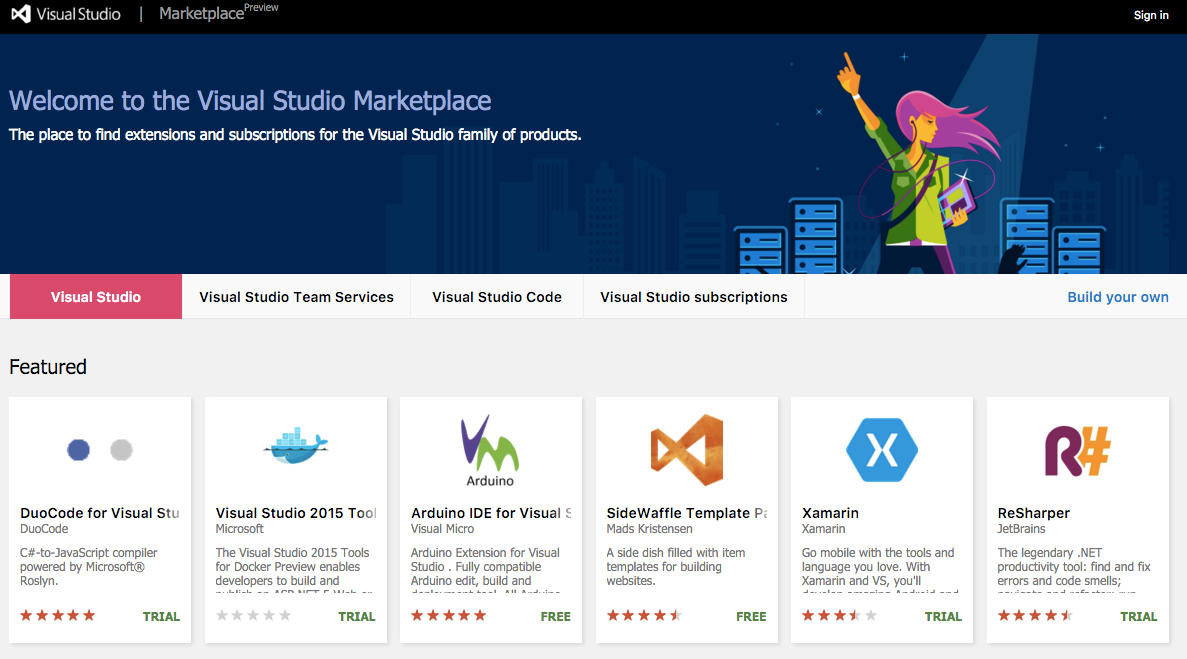 One of the first extensions to be featured in the Marketplace is HockeyApp, the mobile beta testing and crash analytics service Microsoft recently acquired. As a part of this release, Microsoft is introducing a free tier for the service that lets a developer manage up to two apps.

As Microsoft also announced today, the next update to Visual Studio 2015 — creatively named ‘Update 1’ — will launch on November 30 and include updated tools for building Universal Windows app, a pull requests hub, the ability to debug Java source code in the IDE, and support for TypeScript 1.7, among other things.

Another change to the Visual Studio line-up is mostly meant to squash confusion. For non-Visual Studio insiders, the name “Visual Studio Online” long led to a lot of confusion — something Liuson freely acknowledged in our interview. It’s natural to think, after all, that this is an online version of the Visual Studio IDE. What it is, however, is a hosted DevOps service for sharing code, tracking projects and shipping products. It was previously known as Team Foundation Service. Going forward, this service will now carry the far less confusing name of ‘Visual Studio Team Services.’

The company is launching quite a few updates for Team Services, too, including IntelliJ support and a task-based Build service, as well as improved dashboards for tracking a team’s progress.

Other new tools and features announced today include the release of Microsoft’s Android emulator for Mac OS X (which will find its way into a future update of Visual Studio). As well as release candidates for .NET Core 5 and ASP.NET 5.

Microsoft also today launched the beta of its free Visual Studio Code text editor for Windows, Mac and Linux — and it’s making the code for this tool available under an open source license, too.

As Liuson told me, the culture at Microsoft has changed and the company now wants to be “open by design.” That includes the platform the company builds itself, as well as given the developers on its services the ability to target other platforms as well. The free Visual Studio Code editor for Windows, Mac and Linux, as well as Microsoft’s Android emulator are good examples for this. But in what may be an even stronger statement, Google’s Angular team will be on stage at Connect today to endorse TypeScript. That’s akin to seeing a Mac laptop on a Microsoft stage a few years ago, but even that has become pretty standard now.