Facebook’s on a quest to absorb the Internet, and now it looks like it could invade crowdfunding. Today the company released a new Fundraiser product that allows nonprofits to set up a campaign page, show off a video explaining their goal, collect cash, and let people share News Feed posts with buttons so their friends can instantly contribute without clicking to a new page. As is, Facebook’s Fundraising feature could compete with platforms like Crowdrise.

But if you just take the “non-“ out of “nonprofit,” what Facebook built becomes a highly viral Kickstarter competitor. Facebook tells me its focused on nonprofits with these tools. Then again, Facebook was focused on nonprofits when it built the charity Donate button in 2013, and a year later it launched a similar Buy button for shopping. Even if Fundraiser was made for non-profits, it could be repurposed in the future. 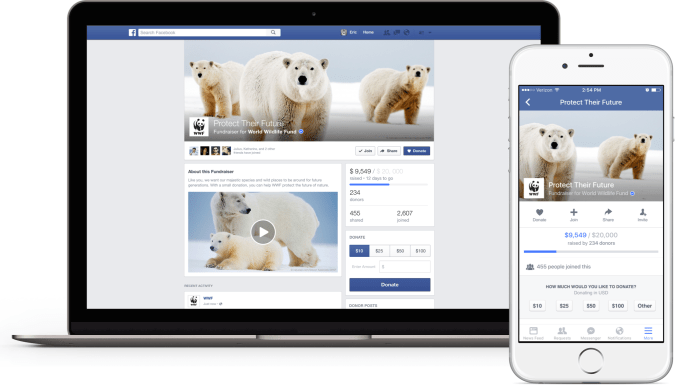 The fact is that social networks drive an enormous percentage of crowdfunding contributions. Few people are just browsing Kickstarter and Indiegogo desperate to plop down cash. Even campaigns prominently featured by those platforms only get about 25 percent of their traffic that way. Twelve percent is more typical, and it can range down to 3 percent, Plinth Agency crowdfunding consultant Desi Danganan tells me. Most campaign organizers rely on promotion to their own social graphs and re-sharing through places like Facebook to raise dollars.

The problem is that to actually pledge money, people have to leave Facebook and visit the campaign’s page on Kickstarter, Indiegogo, or wherever. That’s friction. There, they might not have a credit card and billing info on file, so they’ll have to enter it. More friction. Then they’re an extra click away from sharing the campaign back to their own friends on Facebook. Even more friction. 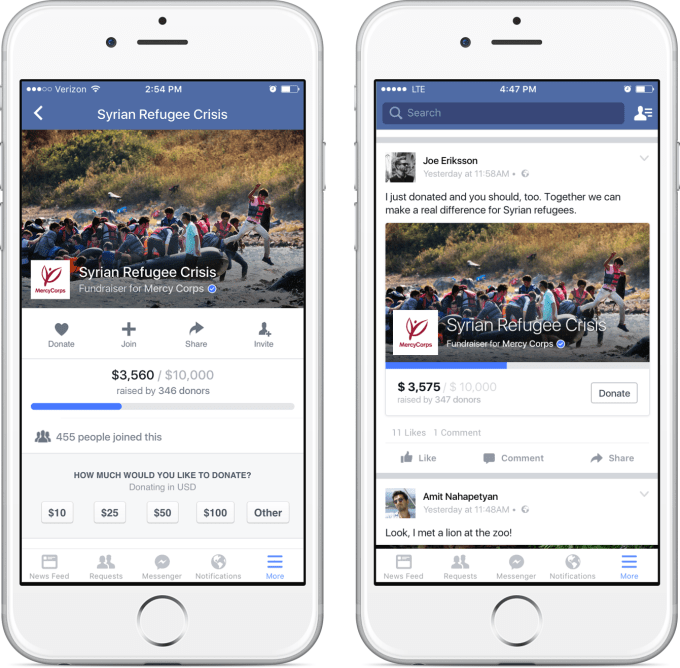 Facebook hates friction. It knows that at its scale, even shaving a little time or effort off a user experience can trigger massive benefits. A recent Facebook Messenger feature called Photo Magic could shave five seconds off sharing a third of the photos sent through the chat app by using facial recognition. But since 9.5 billion photos are shared there per month, smoothing this little friction could save users 500 years in the same time period.

Crowdfunding campaigns on Facebook could offer discovery, payment and virality baked right into the platform. The Fundraiser feature already lets users who want to support a campaign without spending money “Join” to receive updates, post to their feed, or easily invite friends. The social network offers better ways for organizers to stay in touch with donors and encourage sharing than a dedicated crowdfunding site ever could.

Streamlining the crowdfunding process could feed into Facebook’s mission while also making it some money. The company’s goal is to connect people, and crowdfunding projects are becoming the premier way people rally together. Whether it’s an invention, art project, or good cause, crowdfunding unites communities. It doesn’t matter if they’re geographically condensed groups of real friends, or far-flung believers in a common purpose. Tackling crowdfunding seems right up Facebook’s alley.

Making it easier aligns with the company’s other initiatives to absorb the Internet, from Instant Articles and hosted videos to small business mobile Pages that can substitute for complex apps. Facebook already has several products that rely on you saving payment information with it. There’s friend-to-friend payments in Messenger, Buy buttons on News Feed, and the revamped Donate button for charities.

Crowdfunding projects could lure in more payment info, as people may be inspired to go through the one-time set-up flow to back a friend’s campaign or something they want birthed into the world. That payment info helps all of Facebook’s other products.

Once crowdfunding campaigns live on Facebook, you can be sure organizers will advertise on Facebook to promote them. You already see plenty of ads leading from the social network to projects on Kickstarter and Indiegogo. But some users are surely discouraged from clicking because they don’t want to interrupt their Facebook experience.

Ads for Facebook’s own crowdfunding pages could let them contribute in-line and go back to socializing. And since they’d keep users rattling around inside its walled garden, the ads are even better for Facebook than ones that lead off-site. 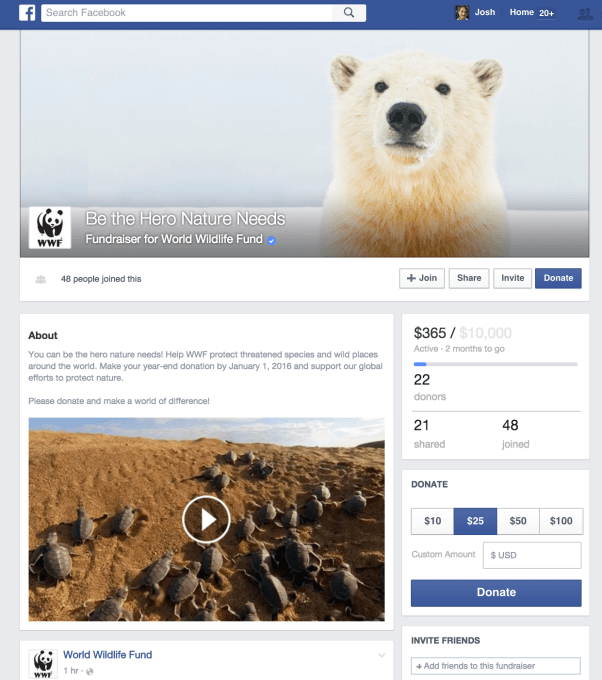 Of course, there a million things Facebook could do with advantages over incumbents. There’s no certainty it will build out a full-fledged crowdfunding feature. I’ve asked Facebook if it’s considering it, and will update if I get a response.

To build Facestarter, the company would have to set up all the reward and update systems and potentially police the platform for scams. Because crowdfunding is relatively well centralized on Kickstarter and Indiegogo, it’s not as ripe a space as creating a social alternative to fragmented non-profit fundraising. And some of Facebook’s clones, like Snapchat impersonators Poke and Slingshot have flopped.

But that’s benefit of Facebook’s behemoth size. It can experiment with barging into any business it wants. There’s no harm kicking the tires of Kickstarter. If it doesn’t work out, on to the next app.