One of the recurring questions facing on-demand and “sharing economy” services is whether normal people will actually use them. BabyCenter decided to look at the issue by asking “mobile moms.”

They found that in urban areas, 42 percent of moms had tried one of those services, a number that dropped to 21 percent outside those major cities. Not surprisingly, the best results were in San Francisco, where 56 percent of respondents said they’d tried an on-demand/sharing economy service.

Now, I’d argue that a 42 percent tryout rate is pretty darn good, particularly since most of these companies only launched a few years ago (or less), but BabyCenter also found that many moms weren’t even aware of them. For example, two out of five moms in urban markets (and three out of five outside those markets) said they hadn’t heard of chore services like TaskRabbit and Airtasker.

Julie Michaelson, BabyCenter’s head of global sales, said via email that she was “struck by the fact that so many moms don’t know about their existence.” 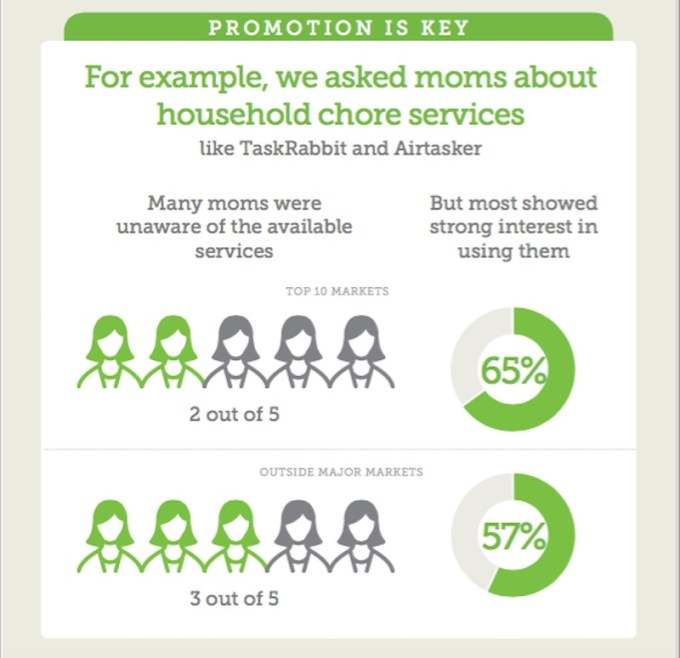 “Today’s mom is the ideal user for many of these apps, since they can help simplify their hectic lives,” she added. “The research shows that a handful of these on-demand services have made in-roads with moms, especially in the larger urban markets, but the findings spotlight a tremendous opportunity for these companies with a sizable audience – one that needs to be better marketed to in order to convert them into customers.”

It sounds like BabyCenter, which offers advice around parenting, is positioning itself as a place where on-demand services can reach those customers.

The company worked with Research Now to conduct a survey of 3,901 women in the top 10 designated market areas — basically, big cities like Los Angeles, New York and the San Francisco Bay Area. There were also 849 respondents from outside those markets. In order to participate, women either had to be pregnant or have at least one child, and they had to own a smartphone.

Update: You can now read the full report or check out this infographic summary.