Zenefits CEO Parker Conrad danced around a question about building out payroll services at Disrupt SF 2015. “I can’t announce anything about new products specifically, but you know payroll’s a very important spoke,” Conrad said at the time.

But the cloud-based HR unicorn has built a payroll product, launching out of beta today.

As Conrad tells it, a select group of Zenefits employees holed up in the Courtyard Marriott to start working on a secret project to create a payroll system shortly after paycheck services giant ADP cut the company off earlier this year.

“We’ve been working on this basically since the day we started getting blocked by ADP,” Conrad told TechCrunch. “We historically thought we were not going to build a payroll system, but the second that [ADP] happened we took a couple of our best people in the company and we got them a room in the Courtyard Marriott across the street from our office and basically locked them in there and said ‘listen, come back when you have a payroll system’.” 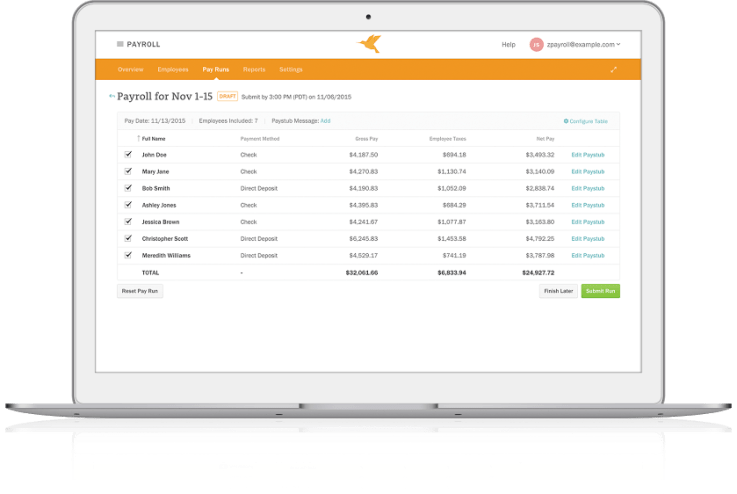 Conrad gave the group a goal to get the payroll product live in 60 days. ADP cut Zenefits off in early June, and Zenefits started beta testing the product internally a couple of months later, rolling it out to about 40 companies after that, according to the company.

We’d heard rumors the startup planned to add payroll to its offerings and Buzzfeed posted about the addition on September 15, 2015, referring to it as “Project Nutshot.” The head of Zenefits’ communications Ken Baer told us at the time he had no knowledge of a payroll project.

However, employees were reportedly already using the new payroll system by early September. Our own reporter Matt Lynley asked Conrad about it at Disrupt.

“We partner with a lot of different payroll companies,” Conrad said onstage. “We want to keep those connections open. We want businesses to choose the payroll company that they work with.”

The formerly named ZenPayroll was one of those payroll partners – one Zenefits relied on and rerouted customers to after ADP blocked it. However, ZenPayroll switched its moniker to Gusto in September and rolled out a bunch of free HR services that looked very similar to Zenefits.

However, Conrad said his payroll service is different from the ADPs and Gustos of the world.

“We call it self-driving payroll,” Conrad told TechCrunch, and said to think of it “like what Google is doing for self-driving cars.”

The new payroll system runs in two modes. One is the self-driving mode Conrad mentioned. This is a free, fully automated service integrating automatic payments with any updates and changes to employee deductions for health, retirement, and other benefits.

There’s also a pro mode for those who like to tinker a bit on the backend. Zenefits Payroll Pro starts at $25 per month, plus $4 per employee per month on an annual contract. The new system will also integrate with Quickbooks and Xero.

“The best payroll system is one that you never see. We made that possible by tightly integrating payroll with all of the systems organizations use to run their HR and their business.” Conrad said. “In a truly integrated world where data automatically flows to and from payroll without anyone having to manually input it, payroll is just a value-added feature, and it should be free. That’s the world we’ve created with Zenefits Payroll.”