Sello product director Christopher Lobay said that even though Shopify has made it easier for businesses to build online stores, it now wants to go further by “democratizing” the selling process and “removing all the intimidation” that might prevent someone from selling products online.

With Sello, you just snap a photo of the product that you want to sell, add a price and description, then you’re ready to go. You’ll be able to accept credit card and PayPal payments, and you can share your product listings on social networks.

In fact, Lobay said most products will probably be found through social promotion, rather than through the app itself. So Sello is less about product discovery and more about creating those product listings and handling the purchases.

“We think the marketplaces of the future are these social networks and instant messaging and all that stuff,” he said. “Every person has their own footprint, and we allow them to reach out to the community that matters most to them.” 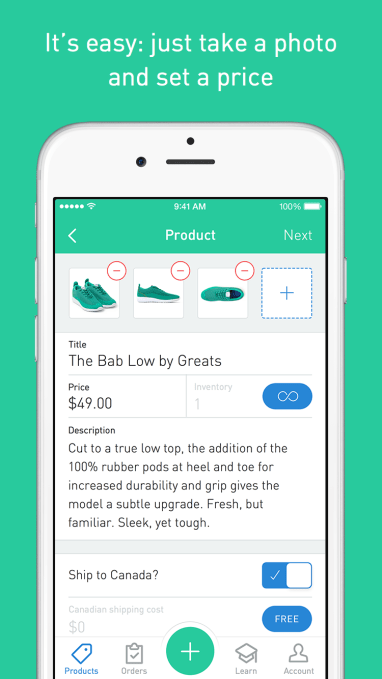 Lobay also described this as Shopify’s first “consumer-facing app.” But it’s not just useful for people selling random stuff — Lobay’s hoping that it encourages people who’ve got a great idea or have built a cool product to actually try selling it. And if they’re successful, then they could eventually move onto larger Shopify platforms.

“[Sello] can be for anybody,” he added. “It can be for makers, for people that are selling their own creations. The whole point is it’s for people who have never sold before, it’s their first time. That’s the thread that ties all those people together.”

Sello is available for iOS and Android. It’s a free app and there are no transaction fees (but you will have to pay for payment processing).