Roku recently addressed the needs of those looking for a premium media player to complement their new, 4K TV with the launch of the Roku 4, but now the company is moving to the other end of the spectrum with a device aimed at the low-end of the market. Today, the hardware maker revealed a low-cost version of its Roku player, the Roku SE, which will be affordably priced at $49.99 and discounted to $25 for Black Friday.

As you may expect, given the pricing, this version of the Roku player will lack some of the features of the company’s other models. For example, it will support up to 1080p video streaming (not 4K obviously), and won’t have features like an Ethernet port, voice search or the remote finder function. And while Roku didn’t publish the detailed specs for the new device, it’s likely to have downgraded internals to help keep the cost low.

The Roku SE will work with HDMI and analog TVs, and will run the newly released operating system Roku OS 7, which will provide access to Roku’s nearly 3,000 streaming channels offering 300,000 movies and TV episodes.

You’re also able to use Roku’s search feature to find movies and TV shows by title, actor or director across over 20 streaming channels, as well as see how much titles cost across streaming services, as you can with Roku’s other models. And the Roku Feed feature lets you track when new titles are arriving on streaming services, including box office movies. 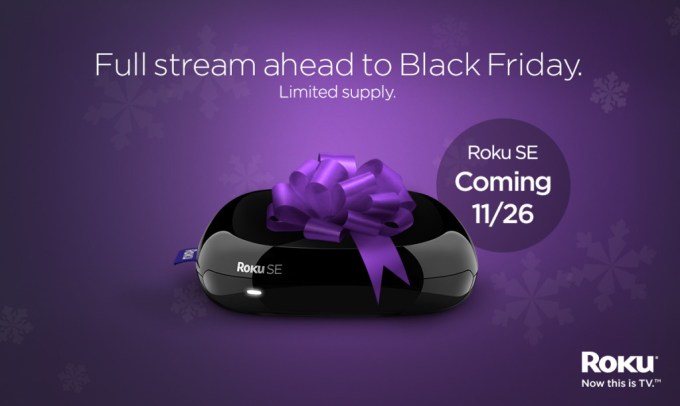 In other words, from a software perspective, the Roku SE’s user interface will look and feel the same as it does on other models, though it’s not likely breaking out the 4K content selection as the Roku 4 now does.

The addition of the Roku SE expands Roku’s existing lineup, which now includes a range of products from high-end Roku 4 down to the low-end Roku 1, and also includes a Roku streaming stick which works better for those who want something portable or who have wall-mounted TVs.

In fact, the Roku SE player is priced the same as the Roku 1, also $49.99, which seems to imply that the company’s “Special Edition” is really just the Roku 1 in disguise. If Roku had wanted to keep the “SE” version around, it would have to kick the Roku 1 out of the lineup to eliminate consumer confusion. But that’s not the case. Instead, Roku says the SE version will only be around for a “limited time” and there are only “limited quantities” being made available.

However, Roku did confirm with us that the new device is “similar” to the Roku 1.

The Roku SE will also be positioned as Roku’s biggest Black Friday deal, and will be made available for just $25 on Black Friday weekend. The device will be sold online on Roku’s own website, as well as on Amazon and in select national retailers like Best Buy and Walmart.

The company will also offer other promotions on its streaming player during the Black Friday weekend as well, it said.