It has often been said that every company is a software company or even a big data company, but as I attended the Intel Capital Global Summit last week, another thought occurred to me: every company is now also an investment company.

The star of the show last week was Intel Capital of course, the venture arm of Intel Corporation, but it’s far from alone. Over dinner strictly by coincidence, I sat with three people who were all involved in running their company’s investment efforts. Everywhere I looked there seemed to be corporate investors looking for a place to put their money. 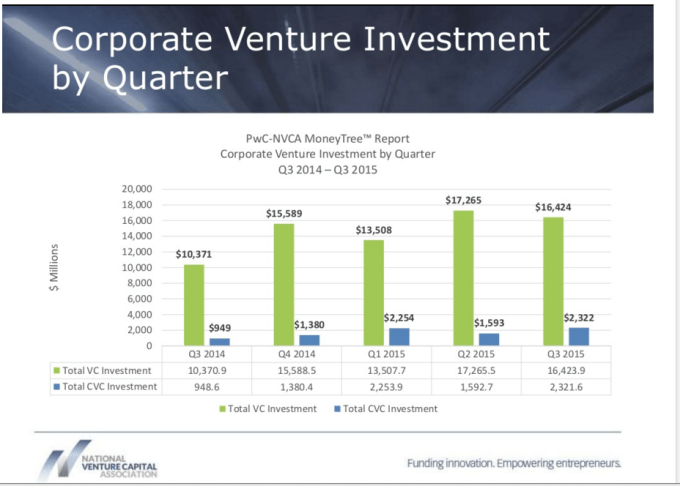 Keep in mind, these numbers could be conservative, especially when you consider Intel Capital openly talked about investing $300 million to $400 million a year and possibly reaching $500 million this year alone.

Consider that in March, 2014 Intel Capital invested a colossal $740 million (a large percentage of its yearly investment pool) in Cloudera, the big data Hadoop company with a valuation in the neighborhood of $4 billion. Intel owns a serious 18 percent stake in the company with that investment.

This year, the company set aside $67 million for investments in eight Chinese companies. They had a blockbuster exit in Virtustream, which was bought by EMC for $1.2 billion last May. They are in fact as serious as any private investment outfit on Sand Hill Road.

But they aren’t the only ones.

Beth Comstock, Vice Chair at GE, appeared on stage at the Intel Capital Global Summit, talking about her own company’s investment efforts. While Intel and GE have different goals in mind when making investment decisions, the idea is trying to find startups with big ideas that can tangentially or directly help their organizations.

Comstock had a clear message for startups: “GE is open for business. If you have a good idea, bring it to GE,” she said. Although companies might have different investment goals, they are still locked in a battle in a marketplace of ideas, and they are fighting to find and fund the best ones, she pointed out.

While GE is excited about what Comstock called the “Internet of Really Big Things” and Intel is interested in compute technology that can advance its chip making business, they all want to learn from these fast, agile companies.

And it’s not just technology companies like Intel, Cisco, GE and WorkDay. It’s also brands like Coca-Cola and Fidelity and McDonald’s trying to find a bit of this magic. As David Butler, who is VP of innovation at Coca-Cola told me last year at Web Summit in Dublin, it’s not as simple as writing a check. You have to be committed to a program like this, letting it grow and develop and nurturing the young startups without being overly controlling — and that’s often hard for a large corporation to do.

It’s More Than Dollars And Cents

When it works, everybody wins. The company gets the speed, agility and creativity of the startup and the startup gets the scale and insight of a large organization.

Comstock agrees that it’s about more than money. GE has not only opened its wallet to startups, it has also launched a startup school where entrepreneurs can learn at no cost to them about hiring, time management, supply chain management, marketing and all of the types of things young executives need to learn.

We are a unique VC, as good a cross of a corporate VC and private VC as you’ll find Wendell Brooks, Incoming president Intel Capital

GE is also providing executives-in-residence to act as mentors. Meanwhile, Cisco offers an Entrepreneurs in Residence program looking for a similar dynamic with Internet of Things technology that can help push Cisco in new directions as a company. It’s trying to identify disruptive early technologies, forge strategic relationships with these startups and pair them with an executive sponsor for six months to help them forge internal and external relationships and nurture the company in its earliest development phase.

Intel has made it clear it doesn’t just want to nurture ideas and get some good technology to play with. It also wants a good return on its investment. Not all of these companies care about that. For some, it’s simply about getting the energy and creativity, the idea, and the rest is just a bonus.

“We are a unique VC, as good a cross of a corporate VC and private VC as you’ll find,” Wendell Brooks the incoming president of Intel Capital told me last week at the Summit. Brooks says the company has been very successful building quality companies and getting good returns.

“Our returns are top quartile, and we have had a profound impact on Intel’s strategy,” he said.

But not everyone feels they have to achieve both. Workday launched a venture fund in July and its goal was primarily strategic, not financial. The idea was to learn from these companies and have them share ideas and approaches with the engineering team.

Brooks made it clear he wants Intel Capital to be lead investors on more deals. He feels that gives his company more input and a seat on the board where they can have more influence on the direction of the company.

Workday by contrast is usually coming in as a secondary investor. The company is focused more on learning while providing values for its portfolio companies.

Regardless of the goals or the company size and investment pool, more and more companies are looking at investments as a way to compete in this marketplace of ideas. It’s interesting that these corporations are launching venture funds, while sometimes competing with private VCs, and in the process, expanding the pool of venture money available.

These companies may have somewhat different goals than the private VCs, but they are all looking for smart companies to invest in, and that common denominator means there is no shortage of investment money available right now for a startup with a good idea.