Today, Apple Music comes to Android phones. It’s the first user-centric app that Apple has created for Android (but not its first).

As people download and dissect it, they’ll doubtless be looking at how Apple builds on Android, what features are ported over from iOS and what Apple’s pan-operating-system Music philosophy looks like in the mobile age. In advance of the launch, I spoke with Apple’s SVP of Internet Software and Services, Eddy Cue, about exactly those things.

“We’ve obviously been really excited about the response we’ve gotten to Apple Music. People love the human curation aspects of it, discovery, radio,” says Cue, launching into the reason for our chat. “But from the moment we got into music, many, many years ago, we’ve always wanted to do things for everyone when it came down to music. Part of that was letting you enjoy your music no matter where you were and what products you were using.”

Which brings us to the beta version of Apple Music for Android, which launches today in all of the countries Apple has Music for iOS in — except for China, where it will be launching a beta ‘very soon’. Apple Music is very similar to the version on iOS. It comes complete with a 3-month free trial. The prices are the same worldwide. It requires Android 4.3 or later and works with For You, New, Radio and Beats 1, Connect and My Music. 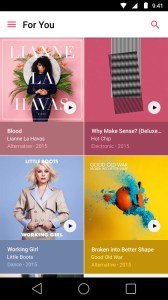 “So if you’ve got another device with Apple Music and you’ve got your whole music library in the cloud you can access it from Android,” says Cue. “If you haven’t, but you’ve purchased music from iTunes in the past, if you use the same Apple ID when you join on Android it’ll read all the music you’ve purchased.”

Apple Music is a beta on Android, which means it’s missing a couple of features. Music Videos are not available on Android, and neither is signing up for a family membership within the app. If you already have a family plan purchased elsewhere, you can log in with an authorized Apple ID to get access.

Cue says they decided to go with the standard Android conventions when designing Apple Music.

He makes the case that the best experience for an Android user would be to feel familiar with Apple Music right on launch. “We wanted customers on Android to naturally be able to use it — what they’ve learned and how they interact is common. Things as simple as [that] the share icon looks like an Android share icon; the menu structure being where it is; these are things that most Android customers are familiar with. We wanted to make sure that they felt very familiar with Apple Music when they sat down to use it.”

Why, though, is Apple Music the first user-centric Android app for Apple? I have thoughts. But first, Cue:

“Music is one of those things that everybody in the world loves — it doesn’t matter how old you are, it doesn’t matter what the demographics [are] — people like different types of music but everyone likes music. And in many cases, music is very global. There’s a regional component, but there’s also a global component — biggest name artists are very, very global. For us, it’s in a way an honor to be representing artists; to get people to listen to their music. And so we always wanted to bring it to as broad an audience as possible. If we’re gonna do it we wanted to bring the full version of it, not only certain parts. We really wanted everyone to have the full music experience and to be able to do things like get Beats 1, which they haven’t heard before and I really think they’re going to love. And to get the human curation aspects of For You and to experience what it’s like to actually get great recommendations for songs. We think those are all very important and we want everyone in the world — as much as possible — to be able to try it.”

Music is universal, and more importantly music is global. For Apple Music to reach the widest audience, it needed to tap into the markets where Android still far outstrips iOS penetration.

According to Kantar Worldpanel, Android market share hovers at 77 percent in China, 60 percent in Japan, 79 percent in Germany and 90 percent in Spain, to name a few regions. iOS is No. 2 in each of those, with bigger or smaller portions of that (and typically rising). Making Apple Music and its catalog available to markets where Android dominates on either price or penetration basis gives Apple a much bigger toehold in the streaming phase of the music wars.

There’s another compelling reason, too. The Switch. During its recent earnings call, Apple’s CEO Tim Cook said that 30 percent of new iPhone buyers were switching from Android. That is a huge number of its incoming ‘new’ customers and it presents a substantial beachhead for Apple to provide exposure to its way of doing things.

“We did this with iTunes very early on when we did it for Windows. It’s really important for artists to get as broad an audience as possible, and for us it’s really important because it gives us an opportunity to interact with customers who may not have experienced any of our products before,” Cue says.

The first version is just for Android; compatibility with Chromecast Audio or Android Wear is not part of the app you’ll see today. Whether it works natively through the system-wide sharing options is another matter. The app has been optimized for phones, but likely runs on many Android 4.3 and up tablets as well.

To that end, Apple is including a prominent feedback button right in the app itself to solicit that conversation.

Cue stresses that this is a full Apple Music experience. Songs that you’ve uploaded into Apple Music that they didn’t have in Apple Music on Android will still show up, for instance — a feature of iCloud Music Library that has been baked into Apple Music. The iTunes Music Store is not available on Android, however, so no purchasing songs. You can convert your three-month trial to a paid Apple Music subscription at the end.

An interesting wrinkle, of course, is that if you pay for your Apple Music subscription in the Android app, Google will get its traditional 30 percent cut of that fee. Turnabout, as they say, is Fair Play.

“This is our first true user app…we’ll see what kind of feedback we get,” Cue says. “We’ve tried really hard to make a great app for Android. We’ll see what customers have to say.”