Only about 6 percent of the country’s biggest cities are planning for or thinking about autonomous vehicles or self-driving cars in their long-range transportation plans, according to the National League of Cities.

What’s even more surprising is that only 3 percent of these cities’ transit plans are even taking into account the impact of ride-hailing companies like Uber and Lyft even though they already operate in 60 of the 68 largest markets in the U.S. That’s according to a content analysis of transportation planning documents from the country’s 50 most populous cities.

Change is coming fast. Seven auto manufacturers and technology companies including Cadillac, Tesla, Google, Volvo, Audi, Mercedes-Benz and Nissan have said they expect to bring driverless cars to market by 2020.

This mismatch is kind of a big deal because the key driver in whether autonomous vehicles will lead to a neo-dystopian repeat of the mid-20th century policies that fueled sprawl and isolated living in neighborhoods with little walkability or not is — land-use policy.

If you look at the chart below, that is the difference between a pre-automobile designed neighborhood and a post-automobile designed neighborhood. It’s much easier to take the density up on a grid layout than it is on a suburban street structure, where there are lots of curvilinear streets and cul de sacs. Once all those street forms and lot sizes are set in place, they’re almost impossible to change because most of the parcels are owned privately.

The concern is that if suburban governments shirk at designing better, more compact physical space, the additional efficiencies and comforts of self-driving cars will just induce longer mega-commutes and more sprawl, which is bad for the environment. 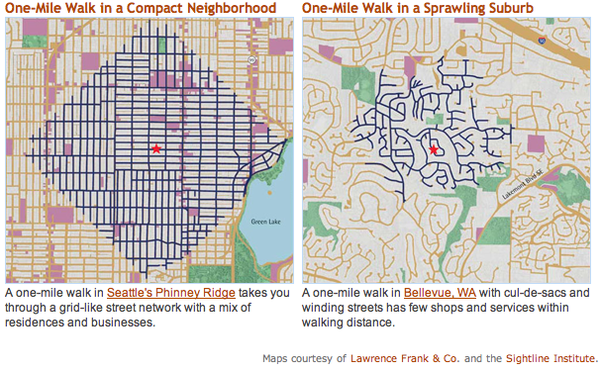 Lots of peninsula and Silicon Valley suburbs oppose more housing construction because they are rightfully concerned about more traffic congestion; they may not have the right street and parcel structure to handle more population and employment growth at the moment.

But autonomous vehicles and fleets of on-demand transportation services could change some of that. For example, it could liberate the 25 percent of physical space in downtown San Francisco that is currently devoted to on-street parking. Or it could open up garage spaces in urban areas to ground-floor retail or additional housing units. An OECD study using commuter data from Lisbon argued that the city could offer the same level of mobility with 10 percent of the vehicles if it used Robo-taxis.

I’ve been on a few panels in the last couple of weeks with representatives from companies like Lyft, Uber, Google and some major public transit agencies in cities like Dallas.

In one panel for the American Public Transit Association last month, I tried to ask everyone whether self-driving cars favored density or sprawl. No one could really say.

That’s because a huge part of the question is up to urban and suburban governments in how they craft policy around physical environments. On Friday, at the National League of Cities conference in Nashville, Gabe Klein, a former Zipcar executive who was a transit director under both mayor Rahm Emanuel of Chicago and former mayor Adrian Fenty of Washington D.C., told me that cities should actually stop adding extra highway lanes and parking lots today.

Klein said that cities shouldn’t just passively accept technology for technology’s sake, but instead build the ideal urban environment that they want driverless cars to fit into.

There are lots of interesting design questions to ask:

Then one of the very biggest questions is — will driverless cars cause the public to disinvest in mass transit? A lot of folks from journalists to transit policy makers have raised this concern. In Florida, a state senator Jeff Brandes, is opposing investments in light rail because driverless cars will come online by the time the project is finished. It’s concerning because no one actually knows how much efficiency self-driving cars can really provide. It could be a repeat of the 1940s when streetcar lines in U.S. cities like Los Angeles were dismantled to make way for cars and buses.

On the tech company side, the story varies considerably. It really depends on the company you’re talking about. Lyft, for example, launched a program last week called “Friends With Transit” that advocates partnerships with public transit agencies so that riders can use Lyft in conjunction with fixed-line transit. The company sees ride-hailing and public transit working in tandem and is a big advocate of more spending on public transit. The thinking is that the public sector can handle the multi-billion dollar infrastructural and fixed-line investments in rail lines and subways that the private sector will never be able to do, while ride-pooling and on-demand rides fills in gaps and handles last-mile problems.

I do not know all the answers to these questions, nor do any of the companies, cities or the federal government. There are too many moving parts from the pace of technological advancement to land-use policy to individual consumer behavior.

But the point is we should start debating all these questions now.