*This post is part of series on Silicon Valley’s political endgame.

Over the last decade, Silicon Valley has become an extraordinary force in politics, but they’ve bewildered the DC establishment with their shifting and bizarre loyalties.

Tech titans are the arch nemeses of labor unions on a series of fronts, from high-skilled immigration and the taxi industry to free trade and their aggressive funding of non-unionized charter schools.

Philosophically, the people who found internet startups (“founders”) are are best described as idealists: a belief that there is always a better solution that benefits most people and reduces conflict. Politically, founders reject labor unions, sovereignty, regulation, smaller government, and militarism because all of these assume some conflict of interest between citizens, the government, other nations, and corporations.

Internet founders believe the best role for government is competitive and direct funding for non-government agencies to solve social problems, whether it’s these parent-run public charter schools, loans to immigrant entrepreneurs for an alternative energy startup, or scientific research at a public university.

And, yet, tech CEOs are arguably the Democrats’ biggest cheerleaders: in the 2012 presidential election, 83% of employee donations from top tech firms went to Obama. “Most of Silicon Valley, most of the executives, tend to be Democrats,” PayPal co-Founder, Peter Thiel, told me. 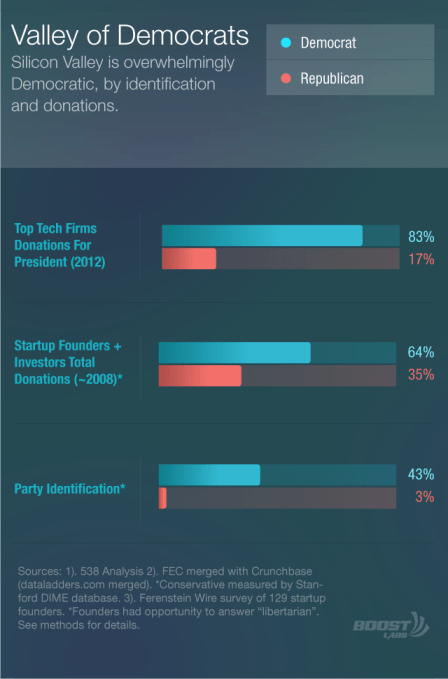 To understand whether this unconventional behavior was just convenient political maneuvering or something more ideologically consistent, I conducted the first representative political psychology study of the tech industry, with the help of an exhaustive database of Silicon Valley founders called Crunchbase (which was created by TechCrunch, where I was the lead policy reporter for 2 years).

The results suggest that Internet startup founders represent an entirely distinct, libertarian-like ideology within the Democratic party (see methods section for survey details). Tech startup founders see the government as an investor in citizens, rather than as a protector from capitalism.

Founders share all the stereotypical fervor for the free market as libertarians, but they also believe the government has a duty to actively help citizens solve global problems. 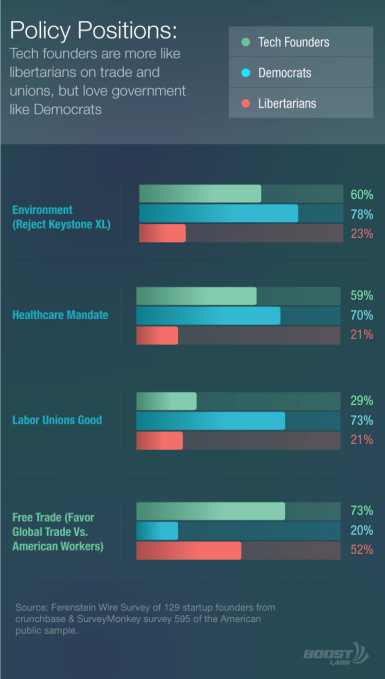 Whereas American politics has traditionally assumed that free market fandom was in an exclusive relationship with libertarian individualism, tech founders are actually quite collectivist. They believe the government, itself, should embrace the unforgiving meritocracy of capitalism by operating like a high-tech company (which is how union-less Silicon Valley-funded charter schools often operate).

They also believe the government should intervene in personal decisions, encouraging citizens to be more educated, healthier, and civic. 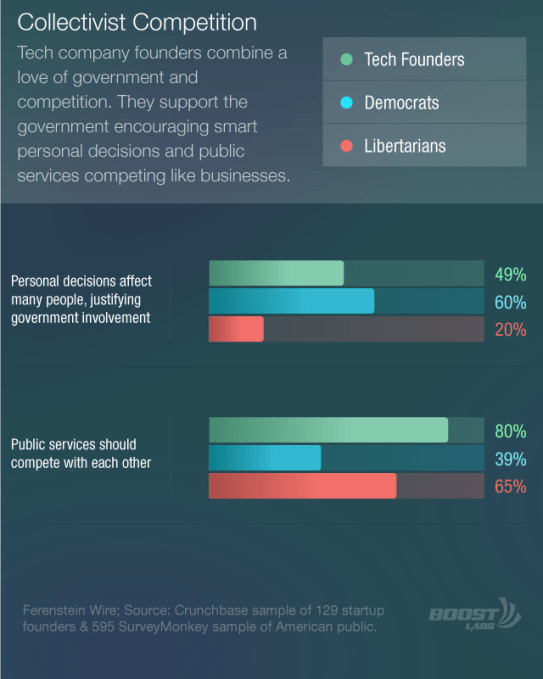 Libertarian icon Rand Paul learned about the Valley’s unabashed rejection of individualism during a campaign stump speech in San Francisco when he asked the crowd, “Who’s a part of the leave-me-alone-coalition?” Only three people clapped. It was awkward.

I found that the philosophy of Silicon Valley is radical idealism. Founders describe themselves as optimists, first and foremost.

This Idealism is not rhetorical fluff; it’s founded on two deep-seated assumptions about the world: change is inherently progressive and there are no conflicts between major groups in society.

“I tend to believe that most Silicon Valley people are very much long-term optimists….Could we have a bad 20 years? Absolutely. But, If you’re working towards progress, your future will be better than your present,” Linkedin founder Reid Hoffman explained to me. 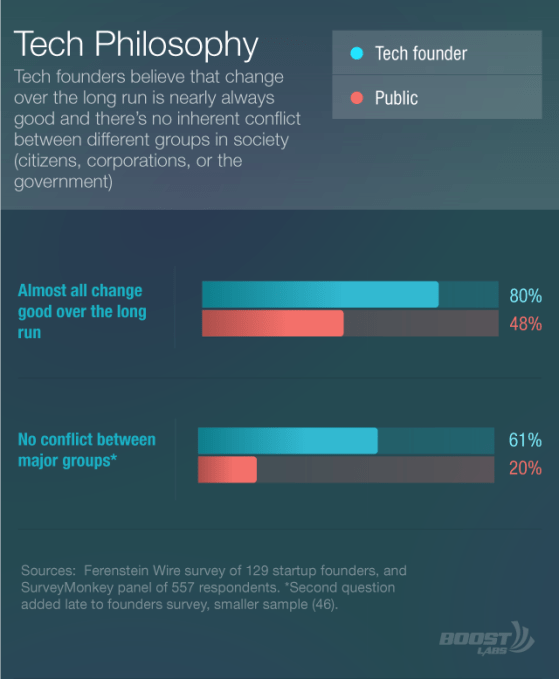 But, it’s not just about the future. This optimism also extends to present-day society. While Democrats traditionally believe in a conflict between corporations and citizens, and libertarians fear a battle between the government and citizens, founders don’t recognize any conflicts between any major group in society. Indeed, when Elon Musk explained why he was giving away his Tesla patents, he noted,

“If we’re all in a ship together and the ship has some holes in it, and we’re sort of bailing water out of it, and we have a great design for a bucket, then even if we’re bailing out way better than everyone else, we should probably still share the bucket design.”

This cooperative view of humanity has fascinating implications for foreign policy as well: founders are not big supporters of sovereignty. They share libertarians’ love of free trade, but it’s generally because they’re fans of any binding alliances that require cooperation between all nations. 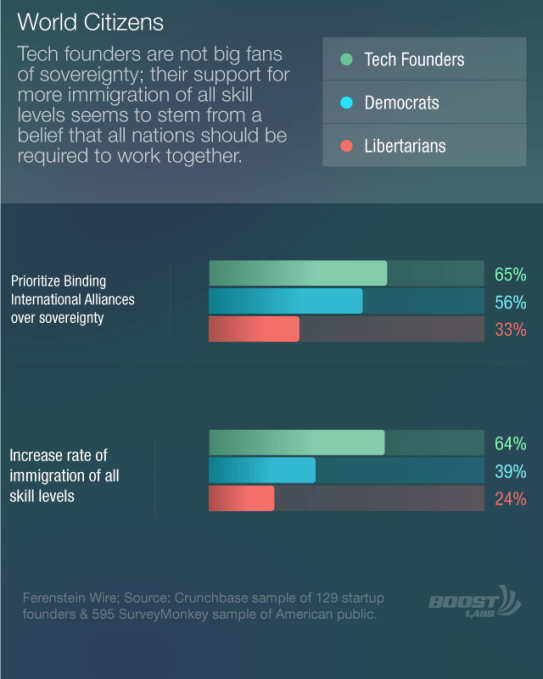 In quite direct terms, Wikipedia founder Jimmy Wales tweeted, “I believe in the elimination of borders and free commerce as a route to peace. Barriers necessarily imply violence.”

At their absolute philosophical core, Silicon Valley’s elite believe that information is a panacea. That is, nearly every problem can be solved through conversation, education, or innovation. To measure faith in information, I asked two questions, ‘Are there any problems a great education system alone can’t solve?’, and ‘how often can military enemies solve their dispute through dialogue alone’.

With near unanimity, founders believe that education can solve all or most problems (from violence to political partisanship) and soundly reject the notion that military enemies can’t talk out their differences.

A lot of writers have scratched their heads trying to classify the Valley’s unusual politics, calling it “quasi-libertarian” and “peer-progressivism”. Back in the 90s, a tech-obsessed faction of the Democratic party called themselves “Atari Democrats”.

I suspect these terms never stuck because nothing ever really captured this novel ideology. 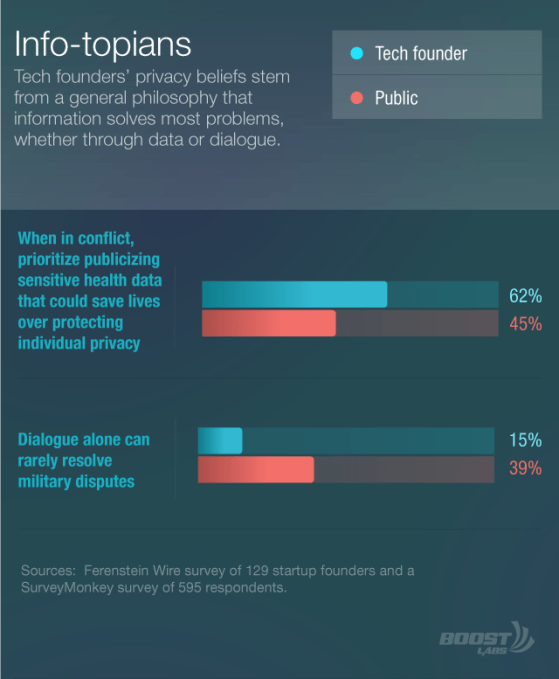 To be sure, while founders’ ideology is novel in American politics, it does have a few analogues. In modern politics, it’s close to what Political Scientists refer to as “communitarianism“, the belief that communities are often better at solving social ills than government agencies.

This jives with the sharing economy’s obsession with replacing public transit with Uber-like carpooling or easing the housing crisis through Airbnb rentals. Google Chairman Eric Schmidt refers to this as the “religion” of the tech industry. 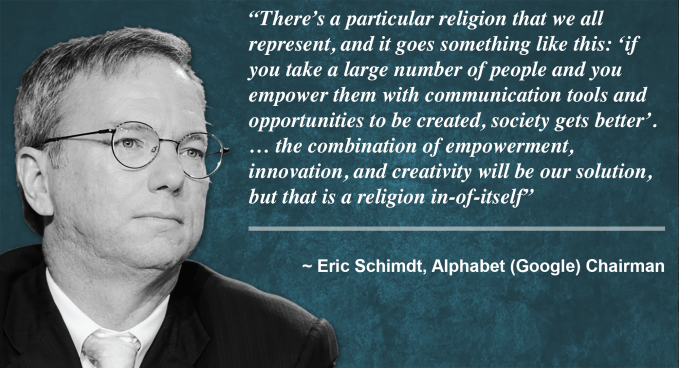 Historically, these beliefs are more akin to the European Renaissance “Enlightenment Era“, where a faith in information was actually a recognizable ideology. After the French Revolution, the victors smashed churches and erected monuments to Reason (capital “R”).

For centuries, extreme optimism in the wisdom of the crowds has lied dormant. But, it appears that the knowledge economy is giving this old idealism new life. It is quite literally the basis of many billion-dollar industries.

As Facebook founding President Sean Parker explained to me, “It’s the hacker ethic that a lot of problems in the world are information inefficiencies.”

Future chapters in this series will explore why Silicon Valley has chosen the Democratic party as a vessel to attain their goals and how the profitability of the knowledge economy is making this new ideology quite powerful.

Regardless of how powerful Silicon Valley actually becomes, Innovation, itself, is becoming a distinct ideological category within American politics. It’s not just about tech issues like immigration and broadband access, but how all of America’s institutions can be reshaped in Silicon Valley’s image.