Hulu may have introduced a commercial free-tier to improve the user experience for those who can’t stand watching ads, but a new deal with Fox Networks has the potential to make the ad-supported version of Hulu less painful as well.

This week, Fox and Hulu announced a new type of ad format would be arriving on Hulu for the first time: engagement ads. Viewers who opt for this sort of interactive advertisement will be able to reduce the number and length of commercials they see on Fox’s current season shows from interruptive ad breaks totaling 2 minutes and 30 seconds, down to just 30 seconds.

The engagement ads are powered by technology from true[X], a company Fox acquired last year for $200 million. The company still operates independently, as its ad tech is used by a number of other major broadcasters, including ABC, Viacom, CBS Interactive, and others.

The engagement ad format itself is meant to solve one of the bigger problems with traditional advertising – not knowing that a viewer actually saw the message. Viewers could have walked away from the program; they may have been playing with their phone during the break, or they may have otherwise simply tuned out the commercial.

An engagement ad, however, ensures the advertiser has captured the viewer’s attention. It loads an interactive canvas and typically starts off with a video. But at some point, the viewer has to interact with the creative in order to move the ad forward. This proves they’re really watching.

For example, an engagement ad for milk might ask the consumer to pick a favorite recipe about all the great things that can be made from cheese. An automaker’s ad might ask what part of the car a viewer wants to learn about, and so on.

Hulu viewers will be asked to choose whether they want engagement ads or traditional commercial breaks at the start of a Fox TV show, and if they choose the former, they can interact with the ad for half a minute, then watch the remaining show commercial-free.

They may also be presented with the option to choose an engagement ad upon the first commercial break, if they went the latter route, but then aren’t bothered again until they move on to another Fox program. Engagement ads can also be introduced after a viewer clicks pause, offering them the chance to watch the rest of the show without commercials in exchange for their attention now. 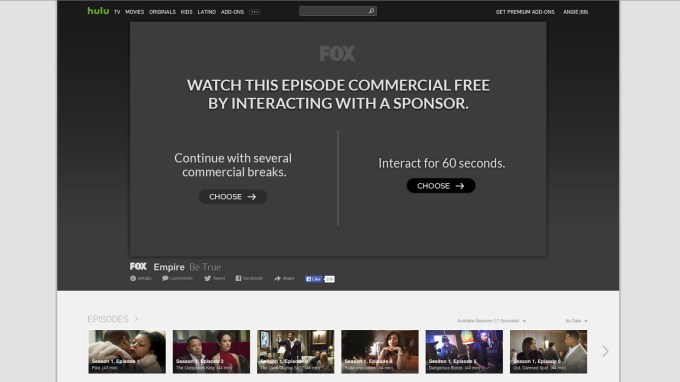 Fox had already introduced engagement ads on Fox.com and in its Fox Now mobile application, but this is the first time that the ads have been available on Hulu.

In addition, that same technology allowing for the Hulu integration will now be made available to other true[x] customers, which include a large lineup of top broadcasters. If the format grew popular among Hulu customers, it could help to improve Hulu’s ad-supported model, while offering a better viewer experience. After all, while you might not want to “play” around with ads, a 30-second engagement is less painful, usually, than constantly being interrupted with commercials.

“All digital ad models are built for tonnage…none of those ad formats are built for quality content,” explains Fox’s President of Advanced Advertising, Joe Marchese, previously founder and CEO of true[X] prior the acquisition. “One of the biggest things about engagement ads is that you’re not just trying to find a way to make money through advertising, you’re trying to make the watching experience better,” he says.

Engagement ads are more expensive than traditional ads, and are charged on a per engagement basis rather than an impression basis. But because of their reduced frequency, the goal is not to make more money with engagements, but rather make the same amount of money but with fewer ads.

That said, Hulu viewers who want to use engagement ads instead won’t always have the option – at least, not yet. For now, the ads are only available in current season shows, and only when a campaign is available because an advertiser bought it.

At launch, the billion-dollar snacking company Mondelēz International will be running engagement ads on Hulu for Swedish Fish and Halls.

The ads are live now on Hulu on the web and mobile, and the format will eventually be supported on any platform where Hulu runs, whether that’s web, mobile web, native mobile apps or connected devices, like Apple TV or Roku.