Twitter is currently holding a post-earnings Q&A on Periscope. The guest? CFO Anthony Noto. The company took a bit of a nosedive after its Q3 earnings at the end of last month, so folks have questions. While it’s normal for companies to have follow-up discussions with analysts, this format is new for Twitter. Add that it’s being streamed on Periscope and there you have it — a very valiant attempt to be more transparent to users and, more importantly, investors.

A quick note before we begin our post-earnings Q&A with @anthonynoto… $TWTR #TWTR pic.twitter.com/U1tjJAxepX

You can tune in on Periscope here: 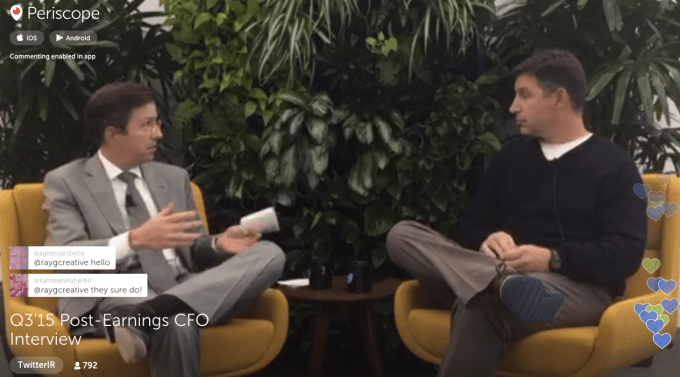 I dig the FAQ format here, but whether investors will hear what they want to hear? That’s a whole different question.

In regards to monthly active users, the all-important topic, Anthony Noto discussed Twitter’s hopes of last year that it could double its growth (which hasn’t happened). Noto pointed to recent changes in the company, including Dorsey’s return as CEO and product roadmap changes, saying: “We’re not as far along as we would have hoped.” He went on to discuss how important Twitter’s content is, content that others would “love to have.” He explained kicking up growth as “unlocking” the service’s potential with user penetration.

When asked by Peter Stabler, Wells Fargo analyst, when we should expect an update on the “success” of Moments, Noto said didn’t say anything different than what’s already been said. It’s only been out for a few weeks, so that’s fair. We’re going to hear this question from investors and pundits over and over again though. Noto says that the data is helping the company drive better content to people within the product. “We’re doing exactly what we wanted to do.”

Noto said Moments helps to increase “favorites” so even Twitter’s CFO hasn’t gotten used to the latest change on the platform.

One interesting bit…on ad-blockers, which sometimes block content such as promoted tweets, Noto said that there’s no impact for Twitter.

We’ll continue to follow the stream to see if anything interesting is discussed and will let you know what we hear.