After a short beta period, Mozilla today graduated its new Tracking Protection feature for Firefox’s Private Browsing mode into its release channel with the launch of Firefox 42.

While Private Browsing (which is Firefox’s counterpart to Chrome’s Incognito mode) ensures that none of your browsing history and cookies for this private session are saved locally, some of your data can still leak out to third-party sites. The new tracking protection ensures that third-party trackers, including those from social networks and analytics companies, can’t receive any data from your browsing session. 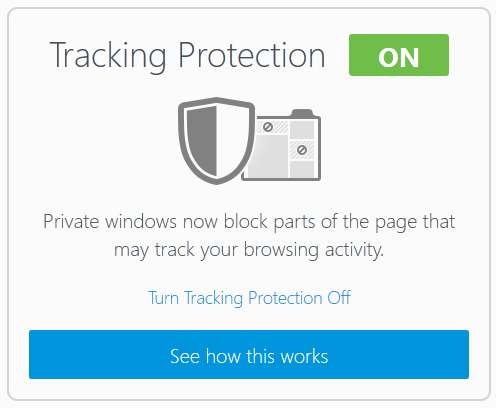 That’s not all that different from how plug-ins like Ghostery and the EFF’s Privacy Badger work, but for the time being, tracking protection only works within the confines of the Private Browsing mode.

It’s worth noting that the tracking protection feature isn’t about blocking ads, but given that many ads also track you, chances are you will see significantly fewer ads in Private Browsing mode now.

A Mozilla spokesperson told me today that Mozilla built this new feature into the browser “because the organization believes in giving you more choices and control over your web experience. Creating a balance between commercial profit and public benefit is critical to the health of the web. Mozilla is dedicated to keeping this balance.”

It’s unlikely that Mozilla will turn on tracking protection outside of the Private Browsing mode anytime soon, but I wouldn’t be surprised if the organization decided to make it an opt-in feature for regular browsing sessions, too.

Also new in this release is a new icon that shows you when one of your tabs is playing sound. Chrome has been doing this for a while now and it’s nice to see Firefox catch on, especially now that every second site insists on auto-playing video. One nifty feature here is that you only have to click on the speaker icon in the tab to mute the sound. On Chrome, this feature is still hidden behind a flag.

Other new features in this release include an improved Control Center for checking on a site’s security and privacy controls, as well as an improved Login Manager.

The updated version of Firefox for the desktop (Windows, Mac, Linux) is now available here. Most of the changes in today’s release are also available in Firefox’s Android version, which you can find here.