It’s not just the impending 2016 political theater or our own paranoid imaginings. Silicon Valley really has been buzzing more about the role of government policy in business innovation, and the crescendo will persist long after our next POTUS is decided.

We can see this trend in the graph below. 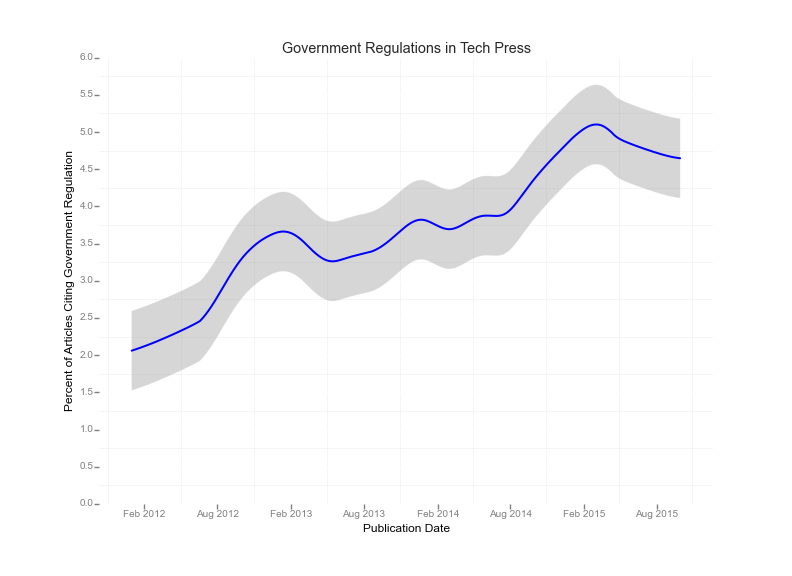 Silicon Valley’s success in disrupting industries has had the unintended effect of inviting government interest and scrutiny worldwide. The good news is, that’s not necessarily bad. The unprecedented cross-pollination of ideas and talent among innovators, established industries and government is creating fertile ground for rethinking the rules of engagement between business and government.

We now have a national CTO and chief data scientist. Our fastest growing companies now have leaders and departments dedicated to promoting responsible social and business policies. These are all great by-products of Silicon Valley innovation taking root in government.

Industry leaders have predicted the coming wave of innovator-regulator interactions and realized there’s an opportunity to shape this as a discourse rather than a collision course (e.g., Uber, Affirm, and Andreessen Horowitz). Successful companies will increasingly recognize that assessing a product’s legal and policy landscape is no longer a leftover box to be checked prior to product launch, but is ideally woven into each stage of product development from conception to growth.

Let’s take the digital payments space for example. A proposed regulation from the CFPB could give Apple Pay a distinct advantage over PayPal and Google Wallet by imposing additional burdens on digital wallets capable of storing funds that don’t apply to linked credit card services. By the government’s measure, this proposed rule is deemed to be “significant” because it’s anticipated to have $100 million or more in monetary impact.

Of course, PayPal and Google have the resources to follow the issue and advocate for their positions, but how many other digital wallet and payment tech startups would have no idea about this proposal until it became final or effective (and maybe not even then)?

It’s easy to make the mistake of thinking that the province of law and policy only affects and can be affected by large corporations. However, as further evidence of Silicon Valley’s success, established industries are adopting the transformative business models pioneered by startups, and their regulators are taking note (see Goldman Sachs following Lending Club, and banks demanding more government scrutiny of marketplace lenders). With the spotlight on Silicon Valley, we’ve seen that even up-and-coming innovators at early stage startups are not flying under the radar of regulators (e.g., Sand Hill Exchange and Ripple Labs).

While government is bringing regulation to innovators, there’s an opportunity to bring innovation to regulation. As 2016 quickly approaches, one race to watch is whether innovators or policymakers take the lead in defining the way business and government interact in the future.