Developers have been digging into the Apple TV App Store data in the absence of category listings and a Top Charts section on Apple’s newly launched version of its media player device, which now, for the first time ever, has opened up to third-party applications. Apple had “hundreds” of applications live at the time of the TV App Store’s launch, though apparently not enough to build out dedicated category pages or rankings at that time. But these features will soon launch, we understand.

In the meantime, according to a number of unofficial sources, we can get a glimpse into which apps are finding early success on the TV App Store, including, not surprisingly, games and various video-related apps, for the most part.

It’s difficult to access this data today, because there’s no official means to do so. Not only does Apple not yet provide rankings, trusted third-party App Store analytics firms like App Annie don’t have insight into the Apple TV App Store, either.

App Annie told us that it’s currently unable to pull data related to which iOS apps have been optimized for Apple TV, for instance.

That has led a few developers to hack their own version of the App Store’s Top Charts.

One, Steve Troughton-Smith, pulled a static snapshot of the data just out of curiosity over the weekend by spoofing the Apple TV headers when accessing web chart data. This data pull indicated that the Top Paid and Top Grossing apps tended to be dominated by games, though a handful of video-related apps, like a Plex client, or utilities, like Carrot Weather or AirVideo, were also gaining ground.

In addition, Apple TV apps appear to be priced higher than iOS apps, 9to5Mac reported, noting that it was common for apps to be in the $5 to $10 range, and very few priced at $0.99 as on the iOS App Store.

However, Troughton-Smith’s data only showed the TV App Store at one moment in time. Since then, other charts have emerged to offer “live” data.

For example, developer Jonas Boserup has posted a list of the Top Paid, Free and Grossing apps in the U.S. Apple TV App Store, which again shows popular games riding up the charts, alongside apps for watching videos, and even a good handful of “workout” apps – something that could point to the potential for the “Health & Fitness” category to do well on the TV App Store in the future. 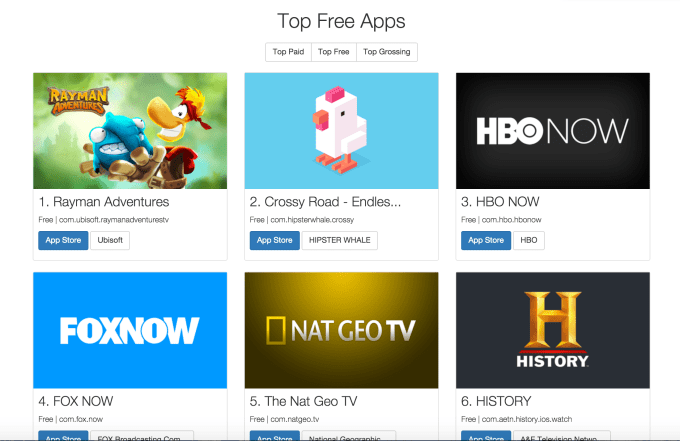 Meanwhile, Slide to Play has published its own list of Top tvOS apps, including breakdowns by category.

According to its data, which is refreshed daily, there were 1,025 total apps live on the Apple TV App Store as of last night. Games like Beat Sports, Galaxy on Fire, Lumino City, Alto’s Adventure, Does not Commute, Battle Supremacy: Evolution, Geometry Wars 3: Dimensions Evolved, Shoot the Zombirds, and Oceanhorn round out the Top Ten Paid apps – a chart that’s dominated by games for the time being.

//platform.twitter.com/widgets.js In the Top Free Apps section, video apps were more prevalent, including those like HBO NOW, Nat Geo TV, FOX NOW, Showtime, History, CNNgo, CBS and others. It’s interesting to note that several of the main TV channels’ apps weren’t in the top 10, like Watch ABC, PBS, or NBC for example. That indicates that Apple TV users are perhaps more interested in over-the-top video selections, or are fine with using an antenna to gain access to network TV.

Though only days old, quite a few developers have been grumbling about the app discovery issues present on the new Apple TV App Store.

After dedicating time to be one of the first to have their apps ready in time to be available for download at launch, some developers complain that the lack of categories and other issues related to search are making it difficult for new users to find their apps.

Their indignation is justified, to some extent. After all,  Apple seemingly promised a TV App Store that mirrored the iOS App Store’s structure – a mock-up of the TV App Store on Apple’s own website, for example, shows a store that has both Top Charts and Category pages.

But that’s not the TV App Store developers see today.

“Apple’s lack of Top Charts in the App Store for the new Apple TV just goes to show the Apple TV software, tvOS in its current state is very unpolished,” says Boserup. “There is no way for developers to get their apps discovered without getting featured on the front page – which is not likely to happen,” he says.

There are several featured collections available at launch, including What to Watch, What to Play, Best New Apps, Gorgeous Games, Sports, Start Your Engines (car-themed games), and others, but many great apps are still hidden from view, despite these introductory collections.

That’s because the only way for users to find an app is by searching for it by name using an on-screen keyboard – Siri’s voice search doesn’t yet work with the App Store. (That, too, will be addressed in time, but for now it’s a poor user experience.) In addition, there’s no way for developers to share or link to their apps.

Yes, PCalc is now available on your TV – finally. Here is the closest thing to a link I can give you. Hope you like! pic.twitter.com/chbxaxkSQD — James Thomson (@jamesthomson) October 30, 2015

It’s easy to understand why Apple delayed the launch of categories and charts. With so few apps live at the time of the TV App Store’s debut, some categories may only have had one or two apps in them in total. That too, would not be a great user experience.

Plus, Apple may be interested in seeing which app categories will emerge – this is a new platform that could invite different types of applications, compared to what you’ll see on iPhone, iPad and even Apple Watch.

Though many developers are unhappy with the Apple TV App Store right now – Tapbots (Tweetbot, Calcbot) co-founder Paul Haddad, for example, even said Apple “totally botched the launch App Store wise,” – others say the lack of categories and charts is not a legitimate problem right now.

I do think there’s a lot of potential for Apple TV apps, but Apple totally botched the launch App Store wise.

“I’m sure [Apple] will display these categories in the App Store as soon as they feel like they have enough apps to justify them,” says Troughton-Smith. “Right now, there are categories with a half-dozen apps, so I think they chose the lesser of two evils for launch. There are some great launch apps that have virtually no visibility as a result, and I’m sure that hurts the developers. I don’t expect this will continue to be a concern in a few weeks time,” he adds.