There are a number of digital tools that can help consumers save money when they’re shopping in-store or online, including mobile coupons, discount codes, rebates, digitized circulars, barcode scanners, and more. But today, the mobile savings app SnipSnap is rolling out a different kind of savings tool with the launch of Scout, a virtual concierge that helps you find savings via a chat-based interface where you can type in a product’s name, scan a barcode, or even just snap a photo of the product you want to buy.

The launch comes at a time when we’re seeing a rise in the number of digital assistants that go beyond the use cases provided by built-in tools like Siri or Google Now, for example. Today, Facebook is testing a Messenger-based assistant called M, and a range of other startups have launched apps and SMS-based services, including Operator, the shopping concierge from Uber’s co-founder; Magic, GoButler, Fetch, and others.

Some of these competitors are general purpose assistants that can help you with a variety of tasks, while others are focused only on shopping queries. However, SnipSnap’s Scout is carving out its own unique niche – it’s not about helping you shop, it’s specifically aimed at help you save money while shopping, either in-store or online. 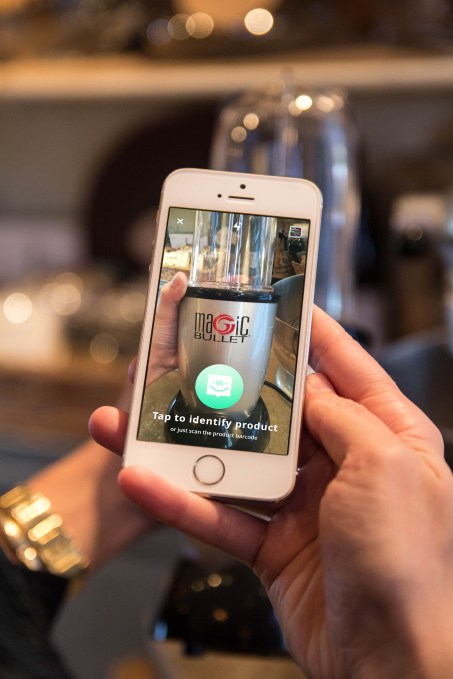 SnipSnap, as you may recall, was acquired by visual search company Slyce earlier this year for $6.5 million. The startup, which was profitable at the time of the acquisition, runs a crowd-sourced database where its 5 million users snap photos of coupons and share them with others – turning the images into mobile-ready offers you can use when at local stores or restaurants.

Instead of being spun out into its own dedicated app, Scout builds upon SnipSnap’s established community of deal-hunters as a new feature within the SnipSnap application.

You access the virtual assistant by way of the new “Scout” button at the bottom of the screen, which takes you to a messaging-like interface where you can chat with the assistant directly.

Here, you can type in the text of the product you want to buy, scan a barcode, or even just share a photo of the item in question. The app is able to leverage Slyce’s image recognition capabilities to figure out which product it’s seeing, then point you to matching deals.

These savings include SnipSnap’s own coupons, plus price-match opportunities and instant rebates from online stores as well as deals from other mobile apps including Ibotta, Coupons.com, Valpak’s Local Savings app, and CashDash’s Find&Save.

While these results are more comprehensive, they’re also not as fast as competitors’ barcode scanners and price-matching tools. Designed for those planning their purchases rather than looking for a last-minute way to save money while at the register, Scout can take up to five minutes to find the best deals, the company says.

The feature has been in development for several months, and was beta tested with a closed group for around a month, SnipSnap founder Ted Mann tells us. “Over the course of the beta, the average user was saving around 15 percent,” he says. “And a lot of users were saving well over that.”

The Scout service itself isn’t just a bot, but rather a “human-mediated AI,” Mann adds. That is, it does include a few automated prompts, but humans also trigger other questions while in conversation with users.

“Depending on what type of product you submit, and depending on if you have a store preference, it guides you through what deals are appropriate, and what follow-up questions to ask,” Mann explains. Some of those questions are automated, and others come from the human staff. “Our hope is that, over time, we can automate more pieces,” he says.

Scout is live now in the SnipSnap mobile application on the App Store, but is rolling out to around 5,000 to 10,000 people daily as it scales. The app is a free download here.