So I watched a good chunk of the Golden State Warriors game in virtual reality last night (thanks to the NextVR app), and I’m happy to report that I didn’t puke.

Even though I was in San Mateo, at moments it kind of felt like I was at Oracle arena in Oakland. More on that soon. There were two active cameras during the game, one court side and one up in the rafters, both at half court.

Here’s the camera down front (thanks to others for taking shots, since I wasn’t there physically!):

Getting any video or photos off of an Oculus or Samsung device isn’t the easiest thing, in fact I haven’t been able to figure out how to take proper screenshots. Luckily, someone else did:

This is how a live NBA basketball game in VR looks w/@NextVR_app. Looking straight, turnd left, right and up. pic.twitter.com/tVMprZUiF4

Kids were even checking it out:

This is my son at the Warriors game live!! He keeps asking "Is this happening right now?" @NextVR_app @oculus #VR pic.twitter.com/Yffr87JCSR

Let’s get to the specifics. The camera placement in the rafters was weird. It was positioned over the tunnel where fans filter into their seats. So at times, it looked like I was birthing people. And they didn’t even know. Also, I could hear people’s conversations, which was neat. But did they know? No clue. Otherwise, this was the camera angle that NextVR went to during commercial breaks and the like.

The camera down front felt weird when I stood up. So I sat down on the couch. The vantage point was basically if you were sitting on the floor and looking at the court. It was pretty sweet and if you looked to your right, you saw a camera man who at times I thought was a damn hologram. He was real, though. I think.

I felt myself turning my head left and right in the same rhythm as if I were actually at the game, which means it felt real at times. Since the experience wasn’t a full 360 degrees, I did catch a lot of black abyss on the left and right. Did it ruin things? No. But if I were to have paid for the stream, I’d want full range of view to realllllly experience a game. It was free, so right on. 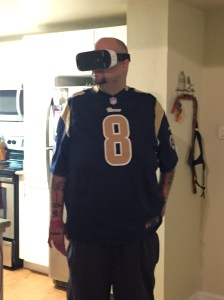 The stream itself was amazingly fast and smooth, and I have crappy Comcast at home. That’s going to be the key to this experience. In the few times that things got herky jerky, I had to take the Samsung Gear off of my face, because it hurt my head and was basically unwatchable. It was the real-world equivalent to someone standing in front of you at a game and you can’t look past them. It sucked, but your Wi-Fi speeds will matter.

Did I catch myself cheering like a fool as if I were there? Yes. Could I check my phone and be distracted? No. Even at a game I am tweeting and taking photos…right or wrong. You don’t have that option in virtual reality (yet).

Am I ready to give up on going to games physically? Absolutely not. The sound was great, but not anything close to what you’d experience in a stadium like Oracle. Plus, the experience was naturally isolating! I’d react to the game and my fiancee would say “what? what happened?.” When things were cool, I’d hand the device over to her, so that wasn’t optimal.

Yes, we’re in that “look what we CAN do” phase with virtual reality. Which is just fine.

Could I watch 82+ basketball games in virtual reality? No. And I probably wouldn’t want to. Would I want to sneak a few peeks at my beloved Sixers since I’m in California? Sure. I would *really* love to watch highlights in virtual reality. That’s something that I would easily commit to doing every day.

ESPN, can you hear me?

In the future, you can imagine there could be more cameras, more vantage points and maybe you could decide which view you’d prefer. These are all premium options that I would pay a fee for. How much? Maybe a monthly subscription of ten bucks or less.