The all-important topic for Twitter, and the one that Wall Street is eyeing the closest, is whether the company can scrounge up some new users to join the service.

This quarter? It crept to just 320 million monthly active users, (307 million without the SMS fast followers). 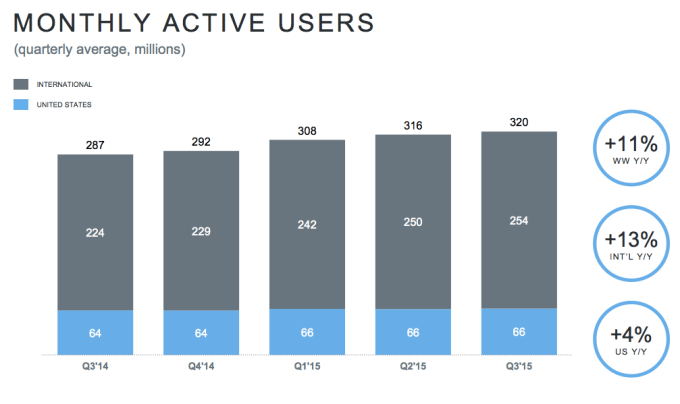 US growth didn’t move for the third straight quarter.

Looks like Twitter's ceiling for U.S. penetration is 20% of the population: pic.twitter.com/m3uwllNgar

Twitter’s stock was up nearly 2 percent before market close, but bouncy (“stock is jumping around like a bean on a skillet in a fire on top of the rockies” said Alex Wilhelm), and just dropped over 10 percent on earnings hit.

Dorsey had this to say on Twitter’s roadmap and quest for true growth:

We’ve simplified our roadmap and organization around a few big bets across Twitter, Periscope, and Vine that we believe represent our largest opportunities for growth.

It’s definitely going to take time to make up the lacking signed-up audience, but the products that Dorsey has the team focused on are meant to bring them in. The company said that it reaches over a billion eyeballs, which is probably true, it just needs to convert a slice of that into signed up users. If Moments and Polls don’t do it for them, the company is going to have to keep the tweaks coming. I suspect they will.

Many, including me, think that the Direct Message product is ripe for ripping out as a separate app, à la Facebook’s Messenger. A platform built upon that product could surely help, too.

With a new CEO, COO and streamlined engineering teams and roadmaps in place, a lot is changing. But sadly growth hasn’t yet, which is what’s angering Wall Street.

Want to watch the earnings call? Join us on the Periscopes.

🐥🎥 Be sure to catch our q3'15 Periscope, going live at 2p PT. Our COO @adambain is joining us going forward! https://t.co/HPM96WqENJ