According to remarks made by Twitter’s CEO Jack Dorsey on Wednesday, it seems as if Twitter may be reversing its earlier decision to ban Politwoops, a service that tracked politicians’ deleted tweets, holding them accountable for things they wished they hadn’t said on the micro-blogging service. Developed by the Open State Foundation, Politwoops operated dedicated accounts in 30 countries around the world prior to Twitter’s ban, including one in the U.S. run by a government transparency group called the Sunlight Foundation.

In May, Twitter banned the U.S. version of Politwoops, then proceeded to shut down the remaining countries later this summer, saying that the service violated Twitter’s developer agreement, and that everyone on Twitter should have the same rights to privacy…even politicians.

The move, naturally, was lambasted by a group of 17 international human rights and transparency groups, including the Sunlight Foundation, EFF, Free Press, Open State Foundation, Human Rights Watch, and others, who reminded Twitter that what politicians say is a matter of public record.

Additionally, the groups pointed out in an open letter to Twitter, the courts have long upheld this same opinion, and that citizens’ rights to information should outweigh an “official’s right to a retroactive edit,” as they put it.

The decision to ban Politwoops painted Twitter in a bad light. It made it clear that the company cared more about keeping high-profile users – like politicians and diplomats – on its service, rather than supporting the efforts of organizations advocating government transparency. 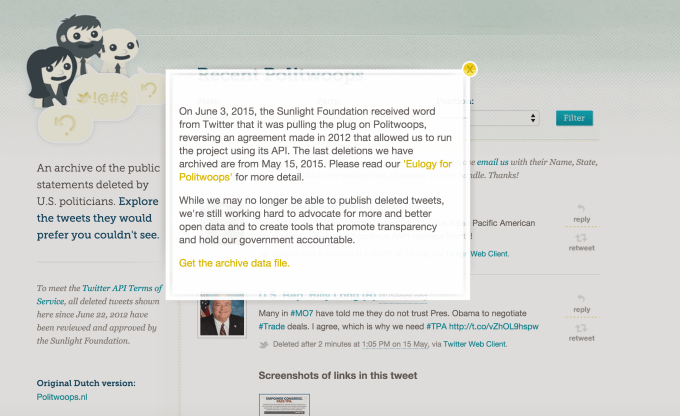 In addition, the ban was indicative of how poorly Twitter treated its developer community.

Even though Twitter has the right to enforce its terms as it sees fit, the ban was enacted with very little discussion between Twitter and the affected organizations. Twitter also didn’t give the groups a way to appeal or discuss the situation further.

Now under co-founder Dorsey’s leadership, Twitter is trying to mend relations with its developers. Dorsey even apologized to developers yesterday, and referenced some of the company’s more controversial decisions – including the shutdown of Politwoops.

“We want to come to you today, and first and foremost apologize for the confusion,” Dorsey said, speaking at Twitter’s second annual developer conference, Flight. “We have a responsibility to continue to power organizations who want to bring transparency like Politwoops,” he added. 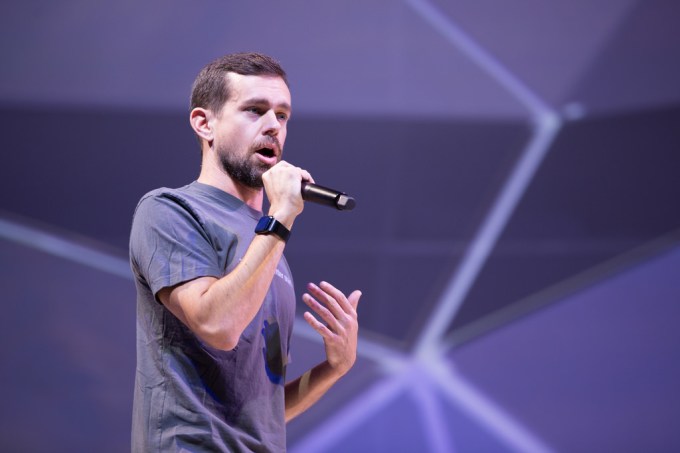 Ironically, despite Twitter’s promise of improved dialog between third-party developers and the company, the CEO’s comments caught the Open State Foundation by surprise, as there hadn’t yet been direct talks with Twitter, we’re told.

Remarked Open State’s Director Arjan El Fassed, upon hearing the news, “this statement seems to indicate a possible change in Twitter’s position on Politwoops. We look forward to reach [sic] out to Twitter and restore access to Twitter’s API again so that we can continue to enable the public to hold elected public officials accountable for their public statements,” he said.

Meanwhile, the U.S.-based Sunlight Foundation had a similar reaction.

“Twitter CEO Jack Dorsey today acknowledged his company’s responsibility to empower organizations that advocate for transparency and accountability in government, and specifically cited Politwoops,” said Sunlight Foundation President Chris Gates. “We look forward to rebooting the dialogue with Twitter about how it can play an active role in promoting openness and transparency around the world.”

In other words, instead of speaking to groups directly or allowing them to regain API access, Twitter so far has only made vague statements about its past mistakes.

The Sunlight Foundation confirmed to us that the Politwoops mention was indeed a surprise, and their only heads up was a note from Twitter to “tune into” Flight. There have not yet been conversations between Twitter and the organization. However, a Sunlight Foundation spokesperson says that there’s “no reason to dwell on what happened” and that the bottom line is that the organization is both “surprised and grateful” for the opportunity to re-open discussions. 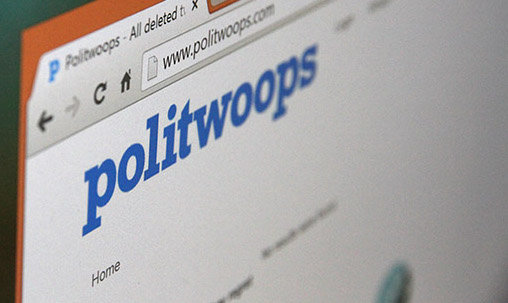 During its time online, Politwoops didn’t break any major scandals, beyond one notable incident where politicians were caught deleting praise for Bowe Bergdahl, a soldier held hostage in Afghanistan, who was later charged with desertion.

But given the heated campaigning going on now in the U.S. presidential race, Politwoops could have served a valuable role – perhaps catching things like Donald Trump’s removal of a controversial 9/11 tweet from 2013 which read, “I would like to extend my best wishes to all, even the haters and losers, on this special date, September 11th.” While this particular incident was spotted by the press, an automated service could increase the chances that this and other manipulations could be uncovered, too.