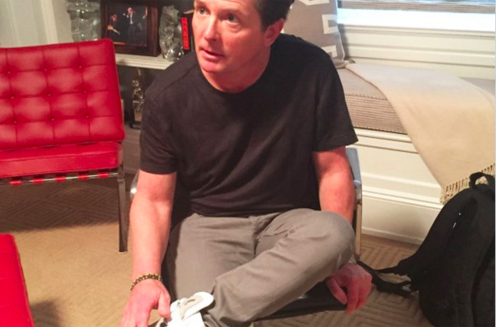 Nike has been teasing the idea of releasing self-lacing shoes — a la Back To The Future — for years. Seriously — heres an article we wrote on them back in 2011.

Word around the rumor mill is that they’ll finally announce some details of the shoes on the Jimmy Kimmel show this evening. As you’ve likely been reminded by basically every website on the entire Internet, today is the “future” day that Marty McFly travels to in the original BTTF.

Looks like stuff is trickling out a bit early, though. The twitter account for the Michael J. Fox Foundation just sent out this video of McFly himself popping on a pair of auto-lacers:

Alas, the video doesn’t provide the best look at exactly what’s going on inside the shoe. If you look closely it looks like the shoe gets a bit tighter around the top, but… it’s still a bit tough to really see what’s happening.

Now, the obvious questions: will Nike actually release these things any time soon (the caption on a separate picture, embedded below, says Spring 2016)? Will they release more than 100 pairs of them, or is it going to be some silly ultra limited edition run?

Update: Yep, don’t count on taking a pair home unless you’ve got a small mountain of money to throw at them (at least for now) — it’s going to be a limited charity auction run. Nike just published the following on their site:

The 2015 Nike Mag is a limited edition release. It will only be available via auction, with all proceeds going to the Michael J. Fox Foundation for Parkinson’s Research. The specific details on the auctions will be posted to Nike News and via Twitter @Nike in spring 2016.

This is real. This is today. Coming spring 2016. cc: @RealMikeFox @Nike pic.twitter.com/KPswXNojvA