Google announced today it’s rolling out an update to its Google Maps mobile app that will (finally!) allow users to add a stop along their current route. For example, you’ll be able to search for things like gas stations, grocery stores, coffee shops and restaurants while still in navigation mode, then add them as a detour on the way to your final destination.

A similar feature was previously available in the Google-owned mapping application Waze, which received a notable makeover yesterday, but has been a long-requested feature among Google Maps users for some time.

To access this new feature, users can tap on a magnifying glass icon that appears at the top-right corner of the screen while in navigation mode. From here, a drop-down menu will appear offering several options, including gas stations, restaurants, grocery stores, and coffee shops. The final option is a “search for more places” button that will let you instead search for other businesses or addresses. 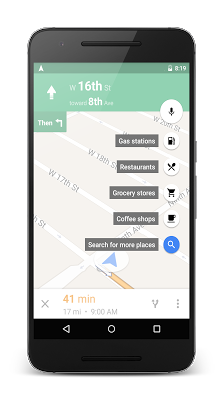 You’ll also be able to use the feature via voice commands by tapping on the microphone button – something that will make it easier and safer to use while you’re behind the wheel and in need of quickly re-adjusting your route. Plus, after you select a detour or stop, the app will begin a countdown of about 10 seconds before navigation will automatically switch over to that destination, notes the blog Android Police, which was able to grab the SDK for the updated app and test it out.

While only a minor update in the grand scheme of things, the ability to add a stop was something Google Maps was sorely lacking – and it didn’t reflect the way people actually use mapping applications. Though sometimes we’re only driving from Point A to Point B, more often than not we have multiple destinations we need to get to on a given route.

However, adding a detour before meant you’d have to stop your current navigation session, search for a new destination, then follow that new route. It was also hard to tell which gas station or store was the one that would require the least amount of extra driving from your current position. That changes with this new feature, though, as Google Maps will now automatically show stops that are within short distances away from the planned route.

In addition, Google’s blog post announcing the news says you’ll be able to not only route your way to gas stations, you’ll also be able to check gas prices.

The feature is coming first to the Google Maps application for Android, and will arrive “over the next few weeks.” The company hasn’t announced plans for when it will arrive on the iOS version of the app, though hopefully that rollout will soon follow.