TicketFire, co-founded by Tanisha Robinson and Eric Kerr, has added an update that makes the patent-pending paper/digital ticket converting app even more compelling. Pic-To-Sell is the name of a new marketplace functionality added to the app.

To recap, TicketFire originally allowed you to scan and digitize existing paper tickets for concerts or sporting events and then digitally transfer them to other people—even during an event. However the app could not accept the payment for the re-sale and buyers and sellers had to rely on 3rd parties to complete the transaction. 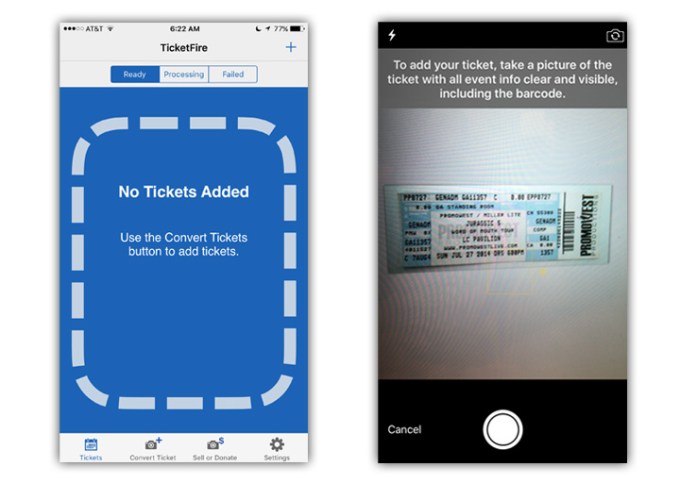 With the addition of Pic-To-Sell to their app, tickets can now be resold directly from within the app. You can also donate the proceeds to a charity of your choice if you like.

There have long been marketplaces for re-selling tickets, but they lacked a digital component and required consumers to mail paper tickets or meet for handoff.

Adding a marketplace intends to make TicketFire’s solution a complete end-to-end process of ticket ownership transfer and resale. This potential speed increase and UX optimization opens up all sorts of opportunities, like real-time variable pricing based on the amount of time left for the event. (An example of this that I previously reported was the concept of selling a ticket during an event if the ticket owner decided to leave early).

According to the company, TicketFire digital barcodes work with all the major venue ticket scanners so redemption should not be a problem

Speaking of redemption, you can already manage and redeem your airline and private event tickets digitally but why major ticketing outlets have not already created this process for digital redemption and re-distribution eludes me. Consumers are getting pretty used to it— I can’t remember the last time I printed a physical airplane boarding pass. This is a step in the right direction.