LinkedIn — the platform used by some 380 million professionals for networking, job hunting, learning things and more — today took the wraps off two new products aimed at one of LinkedIn’s biggest groups of paying users: talent recruiters.

At LinkedIn’s Talent Connect event in Anaheim, California, the company announced Referrals, a way for companies to automate the process of tapping into their existing employee networks to hire new people; and it also debuted a rebuilt Recruiter, which will now let HR people find job candidates based on similar people profiles, as well as with more simplified search strings based on new algorithms. Significantly, both products are focused on ways of maximising the data that exists in the LinkedIn walled garden, rather than venturing into the wider web to do this.

The Recruiter platform will start to get rolled out in Q1 of next year, while Referrals is getting rolled out now. 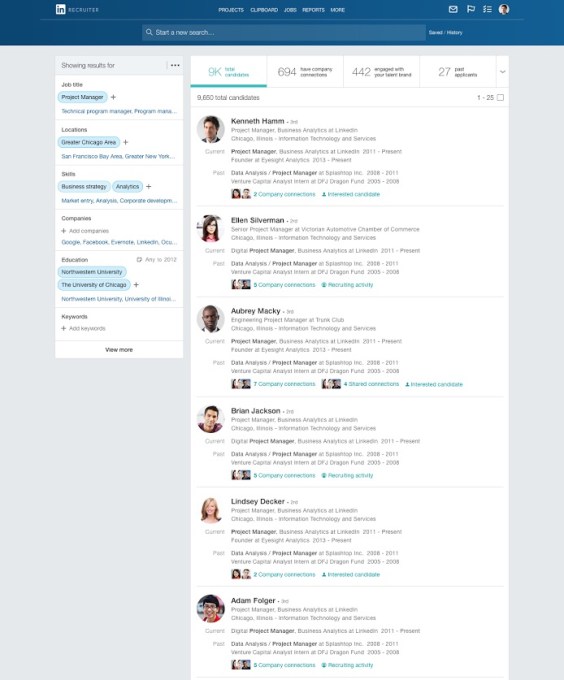 The main idea of the new Recruiter platform — already used by some 38,000 businesses — is that it will now be focused around a much more algorithmic approach to finding new employees. As LinkedIn’s head of talent solutions Eddie Vivas describes it, the change was born out of a challenge that LinkedIn could see facing recruiters on the platform: it’s just hard to find the right person in an efficient way.

There is too much time spent trying to find the right candidates for a job, with recruiters focused on accurate search strings and so on. And the knock on effect for LinkedIn is a frustrating experience for recruiters using LinkedIn as a platform to find candidates, which doesn’t provide a good hit rate.

“I don’t know what my search criteria is, but this rockstar on my team is exactly what I’m looking for,” is how Vivas puts the

So this is what LinkedIn is trying to tackle: using algorithms and AI — a growing trend at the company as it tries to add more intuitive and predictive elements to its services — LinkedIn is providing a way for recruiters to effectively use one employee’s profile as the search criteria for subsequent candidates. On top of this, if you don’t have a specific “rockstar” in mind, you can use a premade set of search tags to find a list of candidates more quickly.

LinkedIn says that while the tech in this product has been built from scratch, it does rely on talent from at least two of the company’s recent acquisitions: Careerify, which it acquired earlier this year in part for its employee referral software; and Bright.com a job search startup where Vivas was a cofounder.

But if you follow the online recruitment space at all, you might see a resemblance with another company that LinkedIn does not own: Connectifier, a startup founded by ex-Googlers, has also built a way to proactively find candidates based on the profiles of employees who you already love. The difference between the two is the like Google, Connectifier crawls the web at large for its data and search results; while LinkedIn stays close within its walled garden.

Vivas — who says that any resemblance with Connectifier is coincidental — says that part of the reason for LinkedIn opting to use only its own data is because it’s more relevant for searches across different verticals beyond tech.

“When it comes to tech recruiting it’s interesting to pull data from Github and Stack Overflow, but if you think about verticals like nursing or finance, it’s hard to think of how social profiling would work,” he said. The other is that it’s more respectful to potential candidates, who are only being assessed on information that there are already putting out there for potential recruitment purposes, by registering with LinkedIn in the first place. 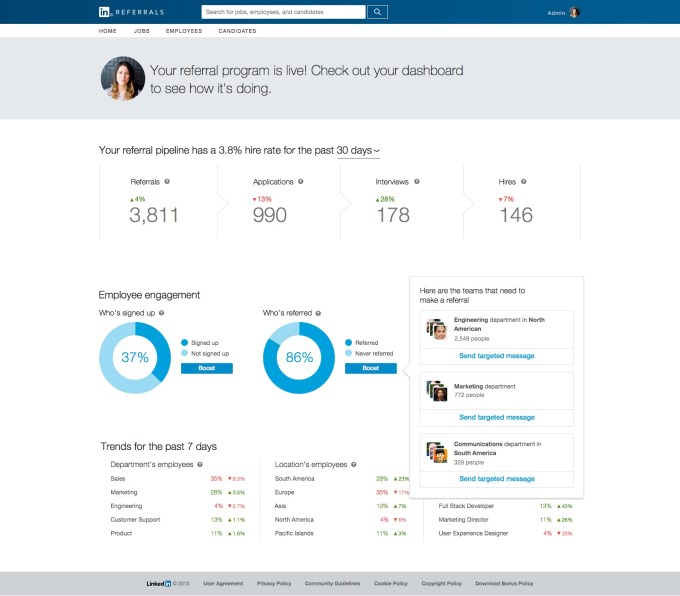 Referrals, meanwhile, are tackling a different pain point for LinkedIn and HR people: while they like to use their employee networks to suggest potential hires, most of them are finding that few employees act on the opportunity, no matter what kind of monetary bonus is waved in front of them. That’s because they are busy with their own jobs, or just may not want to spend time thinking about this.

The idea here is to apply AI once again, this time for a job profile to be effectively “sent” to an employee who is on LinkedIn, whose own network of contacts then gets matched against that to find a good fit. As with other new products that LinkedIn is building that take some of the work out of using the site, the idea with Referrals is that it will “learn” about candidates and also employees. So, for example, if someone is presented as a match for a marketing job but actually has no experience in that area, or you happen to know that the person is actually trying to move away from marketing, the Referrals engine won’t suggest that individual the next time that a marketing role comes up.

I’ll be keen to see whether LinkedIn applies some of that learning to other aspects of its site over time, too, where connection requests and other parts of the site that today feel a little overwhelming get better prioritized.

The new Recruiter interface initially will be desktop only, and both will be English-first before expanding to other languages. While Recruiter will be a free upgrade for those who already pay for the Recruiter product, Referrals will be priced between $10 and $20 per employee per year based on the number of employees in your organization.