Available for pre-order today, Nucleus is a connected home device that lets families have two-way audio and video conversations in the home, between homes, or with any mobile device.

Homes using Nucleus will ideally purchase multiple units for different areas or rooms in the house. Once connected, Nucleus lets users communicate with other Nucleus’ by simply touching a picture of the room you want to connect with.

Nucleus can also connect with devices outside the home, meaning you could have a two-way intercom system between the Nucleus in your kitchen, and one in, say, your parents’ house. Essentially, the company’s goal is to create instant, hands-free communication regardless of whether users are in the same room, home or even state.

To achieve this goal, the company just closed a $3.37 million seed round led by Foxconn (which will be manufacturing the device), FF Angels and StartUp PHL, a Philadelphia-based public/private venture fund led by Josh Kopelman of First Round Capital.

The device itself is a Wi-Fi and Bluetooth-enabled device with an 8-inch touch screen, wide-angle camera, and noise-canceling microphone. Eventually retailing for $249 (with discounts for multiple units), the pre-order price is being slightly discounted to $209. 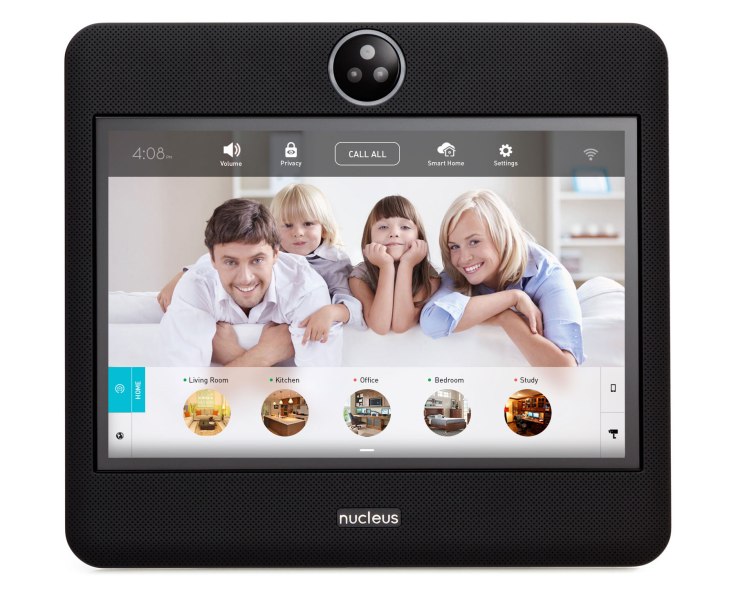 While Nucleus is certainly a technologically advanced product, the concept of a home intercom system seems slightly outdated in a world where lightbulbs and door knobs can now connect to Wi-Fi. Therefore, to remain relevant, Nucleus supplements its intercom functionality with a bevy of other features, including home security, voice commands, and the ability to control smart appliances. Specifically, the device will connect with products like Nest and SmartThings, making Nucleus a central interface to manage a connected home.

Jonathan Frankel, co-founder and CEO of Nucleus, explained that while hundreds of startups have tried to make smart devices for the home, 99 percent of Americans aren’t interested in things like a Wi-Fi-connected lightbulb.

On the other hand, family communication is a compelling enough use case that people will buy Nucleus who otherwise wouldn’t be interested in home innovation or smart devices. In a sense, Nucleus is acting a Trojan horse to get average households on the path to becoming a connected home.

Eventually, Nucleus will develop an SDK so developers can take advantage of the device’s prominent location within the home. Frankel used Uber as an compelling example, looking forward to a day where a user could use Nucleus’ voice controls to call a car from the kitchen table.

Nucleus is available for pre-order now, and will ship in spring 2016.