There are few people who know more about living in the Tenderloin — one of San Francisco’s poorest, most ethnically diverse and densely populated neighborhoods — than Del Seymour, better known as the mayor of the Tenderloin.

Seymour, who spent 18 years homeless on the streets of the Tenderloin, leads walking tours through the Tenderloin and recently started Code Tenderloin to help people in the community get jobs at tech companies.

“I see it as a need for the most unrepresented people in the city of San Francisco, who are struggling in neighborhoods like the Tenderloin,” Seymour told TechCrunch. “My applicants don’t just come from the Tenderloin. We happen to call it a Tenderloin program, but it’s for anyone that lives in a community that’s a Tenderloin-type community. Tenderloin isn’t just a geographical name — it’s a way of living.”

That way of living, Seymour said, is being unrepresented in the job market. “Right in the neighborhood you’re in, corporations are coming in and you’re not part of that,” he said. “So I want to stop that and we want to stop that. We want to change that practice.”

The Tenderloin has a higher proportion of African-Americans (14%) than the city overall (6%), according to the most recent census data. This year, the majority of the unsheltered homeless population can be found in the Tenderloin and South of Market — two areas that have attracted tech companies like Twitter, WeWork and Zendesk over the last few years — according to the 2015 San Francisco Homeless Count & Survey. Meanwhile, the tech industry is mostly made up of white people.

Through Code Tenderloin, Seymour and his small team of volunteers offer month-long, three-hour classes that meet twice a week to help people prepare for job interviews. The aim is to prepare people for potential job interviews at tech companies and other nearby employers. Despite its name, Code Tenderloin does not teach computer programming. “It’s an attractive tag,” Seymour said, “but we are definitely not another coding school.” Instead, the class covers topics like confidence, dependability, building a resume and grooming, and practical activities like researching a company before an interview, mock interviews and public speaking. 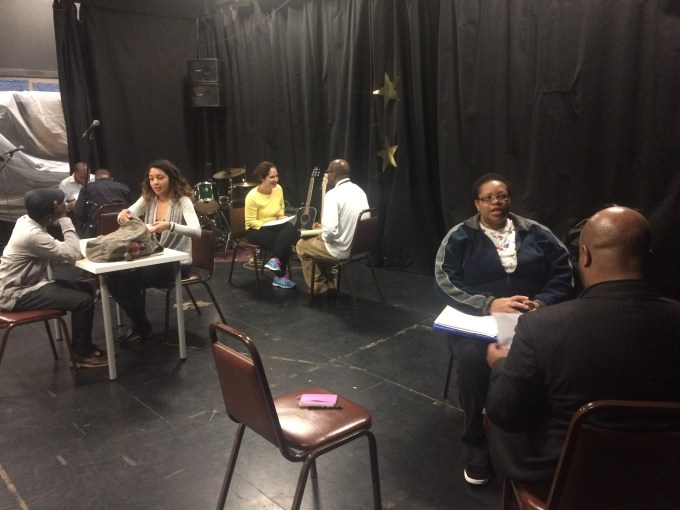 The most recent class ended earlier this week with a graduation, celebration and lunch at Twitter (pictured at the top). The morning of the graduation, I met up with Seymour and the students from Code Tenderloin at PianoFight, a venue in the Tenderloin that has offered its space up for free to Seymour. After the students finished their last class on financial training, we walked over to Twitter, which is located just a few blocks away from Code Tenderloin, to meet with a handful of Twitter employees and take a tour of the building.

The next step for these dozen or so Code Tenderloin students is getting matched with companies. Code Tenderloin currently has commitments from St. Anthony’s, Dolby and Twitter. In the last couple of months, Code Tenderloin has facilitated seven placements for residents at nearby companies.

Code Tenderloin recently received a $10,000 grant from Dolby and has received $1,000 from the Saint Francis Foundation. Seymour said he’s hoping to soon receive money from Twitter so that he can provide more services and reach even more people in underserved communities.

“The ultimate goal,” Seymour said, “is to clone this in other neighborhoods, in other communities.”