While at the San Francisco Auto Show last year, I wondered why car dashboards were so wrong? Every car — regardless of category or price — had the same mess of dials, buttons, lights and screens surrounding the driver. While there were unique and compelling exterior designs, dashboards were all similarly bad.

Like most people who rely on today’s digital devices, I expect elegant and thoughtful user interface (UI) design in everyday life. Whether I am ordering a car from Lyft or posting a photo on Instagram, I expect the user interface to anticipate my needs and make my experience simple and efficient. Yet, car dashboards seem drastically behind the times in terms of UI; they are unintuitive, cluttered with unnecessary information and, worst of all, distracting.

It has not always been this way. The original Ford Model T, the tipping-point product for cars that started production in 1908, had one lever and one gauge in the dashboard. It was a simple and purposeful design that did not distract the driver from operating the car safely. Of course, the Model T had much less technology under the hood than today’s cars, but somehow over the last 100 years we have accepted that complex dashboards — highlighting all the features and technologies in a car with individual controls — are essential. 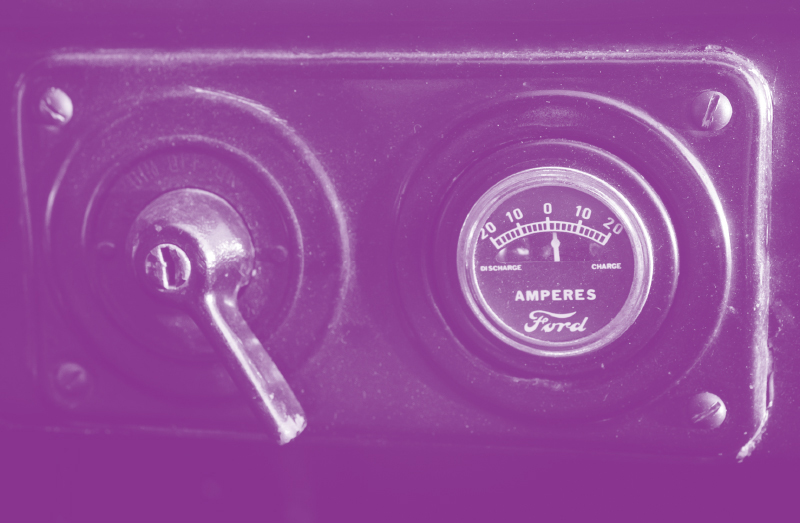 In reality, we as drivers and car owners are living in a world of information overload. Do I really need to know my Revolutions Per Minute (RPMs) or even my speed at all times? Probably not. Do I need to know the battery level or engine temperature? Not likely. And yet, all this information is displayed persistently in my dashboard. During my commute I would prefer a blank dashboard that lights up only when I need it (for example, if my car is overheating or if I am approaching a curve too quickly and should slow down).

How did all this complexity start? One clear influence was airplanes entering the mainstream in the 1930s. We can see much of the impact play out in exterior styling (tail fins, in particular), but dashboard design was also affected. Airplane pilots have complex cockpit dashboards out of necessity, because they rely on multiple gauges and controls for navigation and safety. The UI model is one of “direct control,” where the pilot has a dedicated gauge or button for each function.

Car designers took inspiration from this theme and began mimicking the direct-control UI pattern, creating an association between the number of visible controls on the dashboard and the performance and luxury of the car. You start to see this in the cars of the 1930s, which move from a single gauge to three-, five-, and eight-gauge clusters. The Bentley Blower is a great early example. 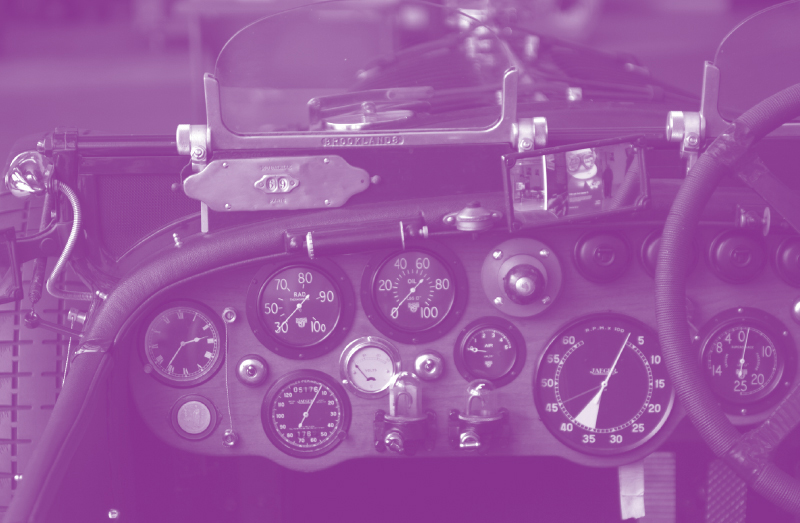 This approach persisted as new technology was adopted into the car. In the 1940s came automatic transmissions and air conditioners, followed by radios in the 1950s. In each case, more dashboard real estate was used to control and monitor the new technology and, in most cases, dashboard complexity was driven by style rather than function. With complexity equated to features, features came to mean luxury. This trend has largely continued and, at this point, most of us accept the car dashboard as is.

However, technology adoption in cars today is hitting an inflection point, and the UI model we have grown accustomed to cannot handle it. Connectivity, smartphone integration, autonomous driving and augmented reality displays — the list of technologies for cars is long and growing. The combined effect of long automotive design cycles that cannot keep pace with digital technology and the legacy of direct control make for clumsy dashboard design.

We as drivers and car owners are living in a world of information overload.

The offenses are all around us: Mercedes-Benz bolts a tablet device to the dashboard, Toyota’s Prius shows an animated engine operation diagram during driving and Ford’s Focus has a central button cluster that looks like a bad television remote. Have we forgotten that driving is a dangerous activity and should not be encumbered with distractions?

We seem to be on the cusp of change, especially with Apple’s anticipated entry into the car market. The trend of direct control and complexity cannot continue; the industry needs a new vision for the dashboard. Manufacturers (and technology companies) are certainly thinking about it, but the changes will not come overnight. Consumer expectations also need to evolve along with regulations.

Going forward, the industry should adopt a model of on-demand UI rather than direct control. In this model, information and controls would only be provided when needed. Here are three principles designers might consider:

Conceal: Instead of making gauges and controls persistent, hide them until the user needs the info. My car’s temperature is only important to me if it is trending in the wrong direction. Alert me when that happens; otherwise I do not need to know.

Anticipate: Mapping apps have gotten good at anticipating when drivers need to hear the next direction. The rest of the car should operate in the same way. If I am low on gas, the car could direct me to a nearby gas station instead of just alerting me about running low. If I am entering an area with a reduced speed limit, the car should highlight my speed relative to the limit.

Personalize: Dashboard UI today is largely a one-size-fits-all model. This is good for standardization, but does not reflect the different modes drivers adopt. My morning commute is all about Zen, so my dashboard should be blank. A Saturday drive is often more about performance, so I do not mind seeing my speed and RPMs. I never use the cruise-control function on my commuter car, but the controls are always there. My car should coordinate with my mapping app and identify places where cruise control might be appropriate.

Today’s world is full of well-designed UIs that are remarkably good at simplifying our lives, anticipating our needs and allowing us to focus on what is important. The automotive industry is hopefully on a similar track, but it needs to shed years of baggage. The shift will be similar to what happened when we moved from phones with keypads to phones with touch screens: A world of possibility will open.

Though the future will certainly include autonomous vehicles, the moments when we do want to control the car should be much richer and, hopefully, safer and more fun. On-demand UIs will give us an experience shaped around the moment and tuned for the experience.