Gemini, the bitcoin exchanged started by Cameron and Tyler Winklevoss, has finally received approval to launch from the New York State Department of Financial Services (NYSDFS).

More specifically, the company is now allowed to operate as a chartered limited liability trust company. Notably, this is different (and subject to stricter regulatory approval) than a BitLicense, which is a new business license issued by the NYSDFS for businesses that deal with bitcoin.

Tyler Winklevoss, CEO of Gemini, said “we didn’t apply for a BitLicense because we wanted to build an exchange that both Main Street and Wall Street could use and trust, so we decided to obtain a limited liability trust company charter in order to do so.” Speaking at TechCrunch Disrupt last spring, the brothers said that Gemini will be like “NASDAQ, E-Trade, and DTC built into one.”

Gemini will allow both bitcoin and fiat deposits, which will be held in offline cold storage and in a New York-based, FDIC insurance-eligible bank, respectively. The fact that an FDIC-insured bank will be working with a bitcoin exchange is notable, since traditional financial institutions have normally shied away from cryptocurrency-based businesses.

The exchange will be targeted at both first-time users and professional traders, and charge a 25 basis point fee to both buyers and sellers on each transaction. 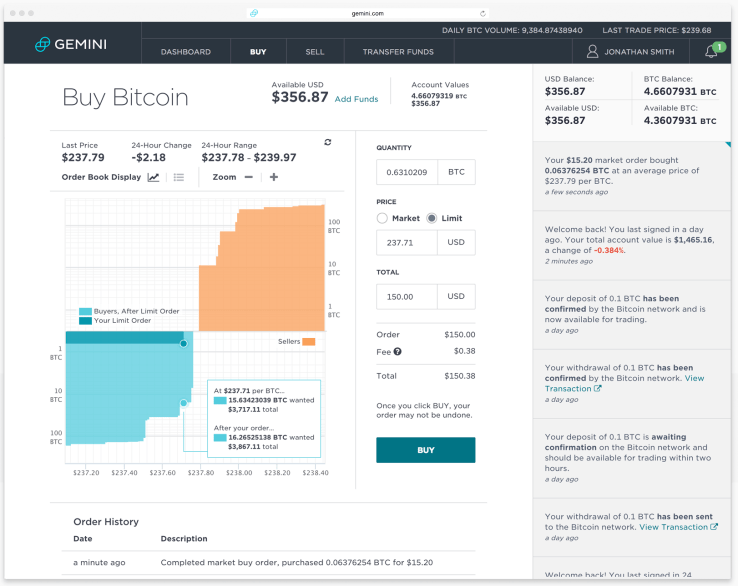 A regulated, secure exchange could be the key to finally winning over Wall Street. While USD-to-BTC exchanges have been around for a few years, most are unregulated and run outside of the U.S. Some are even run anonymously, like the popular exchange BTC-E. One of the most popular exchanges, Mt.Gox, shut down in February 2014 after losing more than $450 million in BTC.

Gemini hopes to stand out from existing bitcoin exchange offerings by emphasizing security and regulatory compliance from day one. Bitcoin will be stored in a proprietary, multi-signature, geographically distributed cold storage system, and the company’s financials will be subject to regulation and inspection by the New York State Department of Financial Services.

Additionally, the team comprises financial security experts who previously worked at financial firms like Virtu Financial and Bridgewater Associates, as well as technology companies like Microsoft and Google.

The platform will be open for trading this Thursday, October 8, but has already begun accepting signups.