When online donors overloaded the requests of Kiva co-founders Matt Flannery and Jessica Jackley more than a decade ago, they were targeting some of the world’s poorest borrowers in places as far away as East Africa and India.

But 10 years later, Kiva is shifting its focus back home with a program called “Keep the Heart in San Francisco.”

It’s taking its longstanding Kiva Zip program for small business owners in America, and targeting it at San Franciscans with zero-interest loans. The funding process works in largely the same way, with donors kicking in money at $25 increments to circulate around Kiva’s portfolio of borrowers. To date, Kiva has lent out more than three-quarters of a billion dollars and the non-profit plans to do about $150 million in loan volume this year across 85 countries.

But on the borrower side, Kiva has kicked in a few social mechanics that enable it to evaluate credit risk without needing a long history like a commercial bank typically would require. Borrowers need to get around one or two dozen members of their social circle to vouch and lend to them before Kiva will open up the process to its entire network.

They also partner with Bay Area based non-profit to source small businesses to support. One former prisoner, Seth Sundberg, is trying to start a snack bar business that will give jobs to formerly incarcerated people who might be barred from finding work elsewhere because of their criminal histories. Another Yemenese immigrant, Abdul Alrammah, just opened a kitchen in the Tenderloin and needs $5,000 to cover the cost of a refrigerator, freezer and a flat grill.

Why do this instead of doing a crowdfunding campaign? Price said that sites like Kickstarter or Tilt take a lot of effort in marketing and handling rewards, while Kiva can quickly round up money for loans through its network. Price said the other benefit is that Kiva lenders usually recirculate their money to another entrepreneur in the network once its paid back. So the more lenders they can bring onto the platform, the farther the money gets spread around.

To date, the platform has supported about 400 Bay Area small business owners, including El Pipila, which opened a stall in The Hall on San Francisco’s Market Street a few months ago. 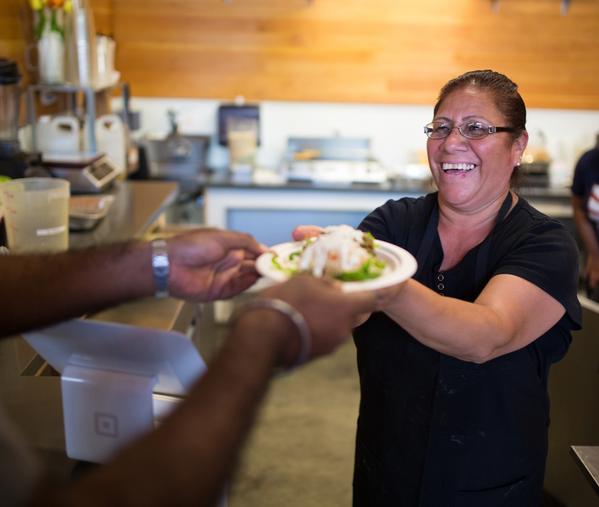 Guadalupe Guerrero was able to open a stall in the Hall on Market Street, across from Twitter’s headquarters, with a $10,000 Kiva Zip loan.

Guadalupe Guerrero had migrated to the United States 14 years ago from a central state in Mexico and decided to start a catering company through La Cocina, a San Francisco-based nonprofit that incubates food businesses from primarily low-income and minority entrepreneurs. For 12 years, she had worked for someone else in a taqueria in Berkeley, making food for 10 hours a day and six days a week. She wanted to work for herself.

But as the business grew, she needed a more permanent space. She and her family raised about $10,000 on Kiva Zip, enabling them to buy a steam table, burners and a griddle and cover the first month’s rent at The Hall.

“We’d love if there was a ‘Lend Local’ movement where it becomes part of the culture to give back to others in the neighborhood,” Price said. “This is really about folks who are doing something that is of value to the community and often times, they’re struggling to make it work.”