Blah blah blah, Twitter has 316 million users or whatever and they’re not growing. Can it grow? Will it grow? Yes, there are a lot of questions that Twitter has to start answering if it wants to get some sort of momentum going with consumers and rebuild trust with its investors.

General awareness isn’t Twitter’s problem. Plenty of people who aren’t on Twitter, and may never be on Twitter, know what Twitter is. It’s a place where people squawk. Where news sometimes breaks. And where sports teams talk trash to each other: 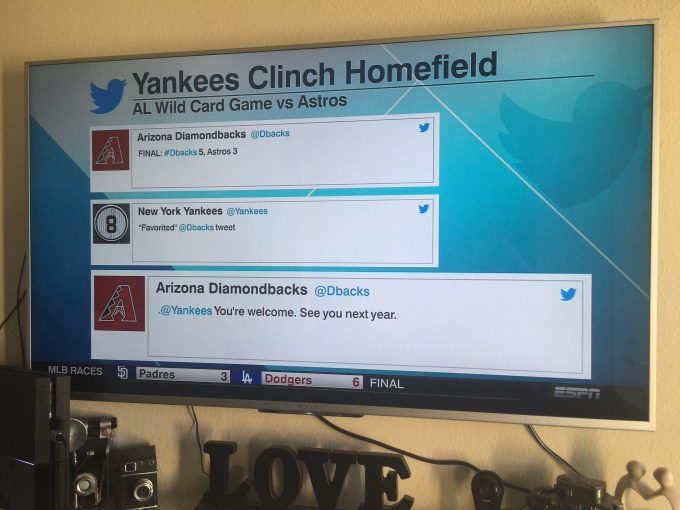 During ESPN’s popular SportsCenter programming this weekend, I heard all about the Yankees clinching home field advantage for the Wild Card game. I knew it had happened, but what I didn’t know about was the bit of theater that you see above.

I don’t follow the Yankees on Twitter. Why would I, I’m a Phillies fan. I completely missed it.

ESPN showed it to me, and explained it…with context. In a very “push” way, it was reinforced to me as a general consumer, not a hardcore Twitter user, that Twitter is important and that “everyone” is on it. Of course, there were no buttons on the screen to fav what I saw or re-share it. But after watching a channel like ESPN dedicate actual time to explaining series of tweets mean I was reminded that the service is in the fabric of our lives…just not in a way that looks impressive during quarterly earnings. Which yes, to run a business, means everything. All of this happened paws free, too. Calmly.

The same thing happens on most news networks, especially CNN. The nuances of Twitter, mostly driven by the personalities doing the tweeting, have seeped into our every day living. Any company would kill for that. Right? Well, not if you can’t capitalize on it — which Twitter hasn’t. 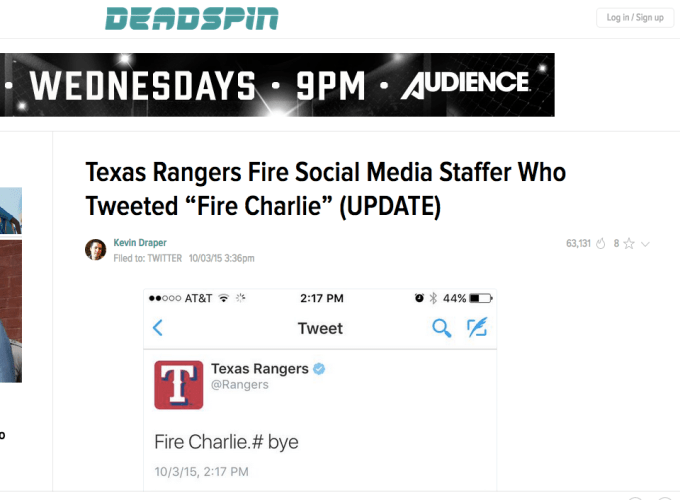 Why has Twitter let television networks and media companies do a better job of displaying tweets and sharing stories than they have? It’s one of the biggest mysteries I can think of in tech. If a series of tweets is good enough for a large mainstream television audience, why isn’t it good enough for those hovering in and around Twitter itself online? Why hasn’t the enthralling experience of contextual tweets been the only way to use Twitter for the past 4 or 5 years already?

No matter who becomes the next CEO of Twitter, the company has to figure out how to figure out what everyone else has already figured out…and make it work in a way that makes Wall Street happy.