“What’s more boring than accounting software? Business progress reporting!” says Duane Jackson, who previously founded and sold online accounting software startup KashFlow. His latest venture, Supdate, aims to solve another pain-point faced by startups: how to provide investors with regular updates in a way that is useful to them but also reduces the time taken and cognitive load for founders.

“Since selling KashFlow I’ve been a seed investor in a small number of startups,” he explains. “I was struck by how badly most of these businesses keep their seed investors updated on monthly progress. It’s either neglected entirely or done in a rather ad-hoc fashion. I’ve spoken to other, more active, investors and they see the same problem.”

Having been a time-strapped entrepreneur himself, who previously took seed investment, Jackson says he can understand why this happens. “Staring at a blank email and trying to remember everything of importance from the last month is hard,” he says, noting it is much easier to spend time on something that feels more productive like the next software release or a customer development call.

“Then a disproportionate amount of effort is required to make the update relevant for the reader. Saying ‘we’re now at 200 customers’ isn’t helpful without also saying how many you were at last month and what your target was. So I wanted to make this process not only quicker, but also to make the reports more useful to everyone involved. Which is why I created Supdate.”

After signing up for Supdate, the owner of the business spends a little time on the initial set-up, defining business areas they’ll report on, entering metrics (and optionally targets) and defining a few goals. Then they simply log in each month and fill in the blanks, entering updated numbers and writing a quick update on each area of the business. 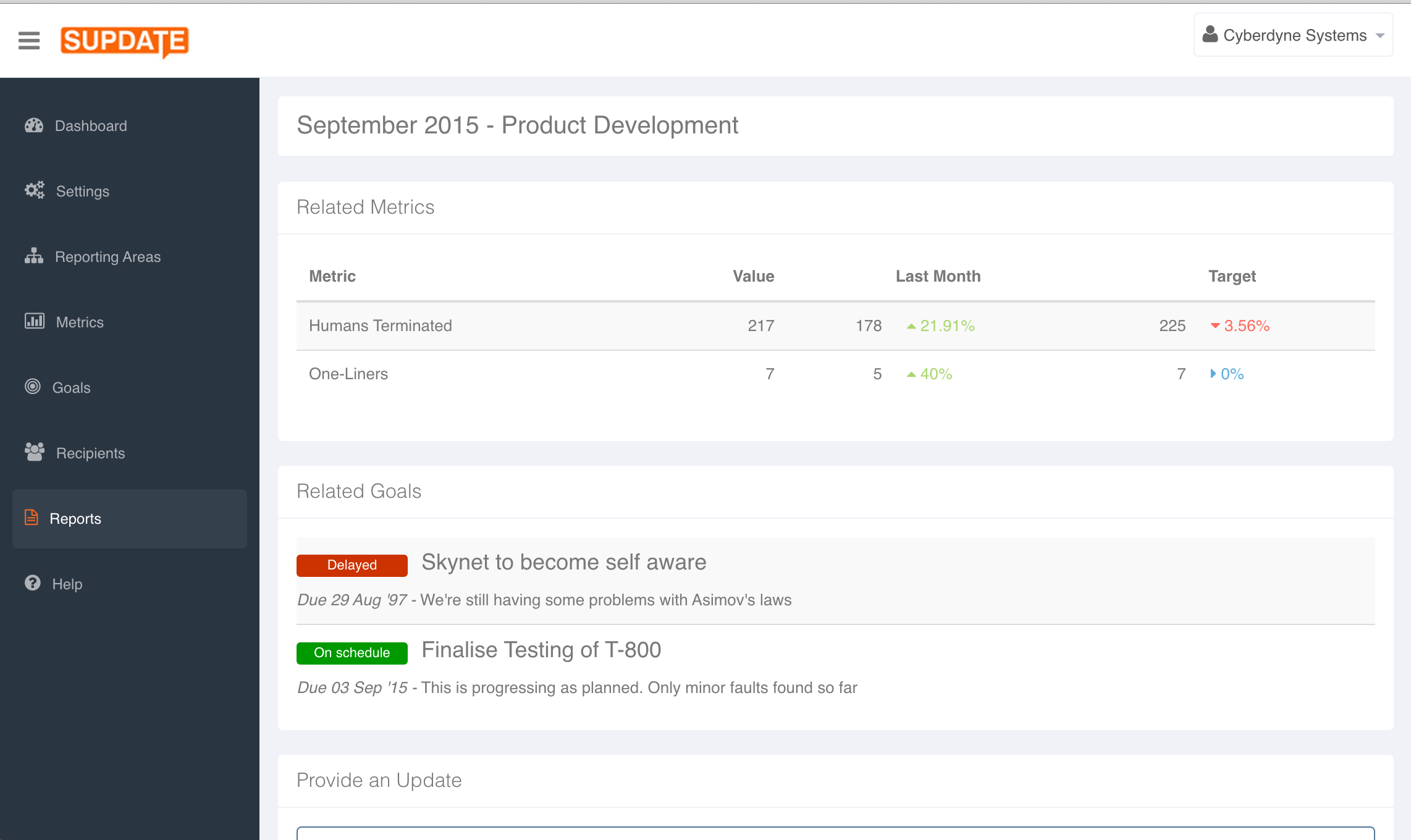 “The report is then generated and nicely formatted, automatically comparing numbers to last month and targets, along with graphs. And at a click of a button it’s emailed to your list of recipients,” explains Jackson.

“For the investor, they’re not only getting more useful and regular updates – but they’re getting them in the same format from all of their investees. And they can easily jump to previous months reports without having to search through emails.”

Meanwhile, when I ask Jackson how Supdate generates revenue, he says it doesn’t — for now — and that all the current Supdate features are free and will remain so. Similar to when he built the first version of KashFlow, for the time being feedback from users is what’s most important.

“I can see lots of ways to add premium features if there’s a demand for them. It could become a communications platform to more efficiently deal with questions from investors (‘I’ve had the same bloody question six times!” is something I often hear’) or it could have a lot more depth on the business plan side of things. And by ‘business plan’ I don’t mean the ‘document we wrote ages ago and rarely look at’ sense, but the ‘getting shit done in a well-planned and focussed way’ sense. I learnt a lot about that in my last few years running KashFlow and I think distilling it in to a software process could be useful.”