Weebly is launching the third generation of its product today, which it calls Carbon — CEO David Rusenko described it as the “first big step” in a new direction.

Until now, Weebly has been known as an easy-to-use tool for building websites and online stores. It’s been successful too, with 30 million people creating sites on the platform, and 250 million visitors to Weebly sites each month. Rusenko added that the company remains cashflow positive and hasn’t spent any of the $35 million Series C that it raised last year.

Two-thirds of the company’s customers identify as entrepreneurs. (Though, hey, that means there are still some non-professional users, like me.) And while Rusenko said that creating their website and store remains “the first and biggest technology problem” that they face, there are plenty of other challenges, like “marketing and customer support and social and fulfillment — all the pieces are just completely separated.”

“With Carbon, it’s not like we’re going to build everything,” Rusenko said. But the update positions Weebly as “the place where you can log in and find a one-stop shop for running and growing your business.”

Specifically, Carbon includes an App Center with what Rusenko said are about 40 partner apps to start, tackling some of those other business needs that he was talking about — for example, businesses that need help with shipping can use the Shippo app. 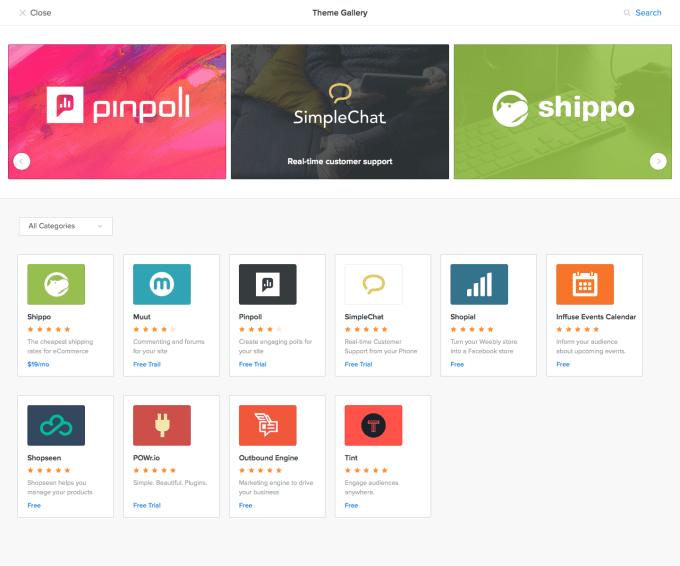 The apps can also be integrated with a redesigned dashboard, which Rusenko described it as “stats on steroids.” That’s because these integrations could allow customers to see all the stats that are relevant to the business — not just website visits, but data from apps like Weebly’s customer support service SimpleChat.

For quality-control purposes, Rusenko said that any app in the App Center will need to be approved by the Weebly team. However, developers can also take advantage of Weebly’s new APIs and build apps for their own use — Rusenko said the APIs allow you “to do programmatically anything a user might do.” One possibility would be a real estate firm that wants to automatically create a new page on their website whenever there’s a new home listing.

Pretty much everything else about Weebly has gotten a refresh, too. The drag-and-drop website editor has a new look. And by using Weebly’s iOS and Android apps, you can even edit your website from your phone or tablet. Granted, you probably won’t want to build an entire website from your phone, but the apps allow you to quickly update your site and make corrections on the fly. And those sites should look better with new themes and a new Theme Editor.

Given Rusenko’s goal of becoming the center of your online business, I wondered if Weebly might eventually include app-building capabilities, as well.

“Not today,” he said. He’s not ruling it out, but “I will say that I don’t think it’s super interesting. I think a website is really good for the long tail. Apps are really good if it’s going to be on the homescreen. For most of our customers, I don’t know that it would make sense to have an app.”

I also pointed out that while Weebly seems to be doing well, Squarespace is the website builder I keep hearing about, whether it’s through ads on the subway or on my favorite podcasts. Rusenko said Weebly hasn’t neglected the marketing side — in fact it recently launched a TV ad campaign. But he also said there’s a big emphasis on word-of-mouth growth.

“I think this is a really, really big space that has been sort of underappreciated,” he added.

Carbon should be available to all Weebly customers now.