Amazon looked at buying Postmates earlier this year, but in the end it built a service that will go head to head in competing with it. The e-commerce giant today took the wraps off Flex, a new on-demand delivery service that relies not on traditional couriers, but ordinary people to bring the packages to you.

The online retailer is offering workers the ability to make between $18 and $25 per hour by delivering packages for Amazon using their own vehicle and a smartphone app that helps them route their deliveries.

The service, which is now live in Seattle, is initially focused on hiring couriers for Amazon’s one-hour delivery service Amazon Prime Now, though the company says that in the future, other types of packages may be delivered, as well.

However, for the time being, it appears the rollout of Amazon Flex is focused on augmenting the labor pool for managing the speedier Prime Now deliveries.

Seattle is actually one of the more recent markets to support Prime Now, and using “gig economy” workers isn’t the only new thing Amazon is testing in the company’s hometown. The Seattle region is also the first location where Amazon added the option to deliver beer, wine and liquor on-demand through its Prime Now application.

Similar to other on-demand services, like those from rival companies such as Uber, Lyft or Postmates, for example, Amazon is touting Flex as a way for workers to “be your boss” by setting the hours they want to work. Those who want to pick up shifts can select either 2, 4 or 8-hour blocks of time that day, or can set their availability up to 12 hours per day for the future, a FAQ on the Amazon Flex website explains.

“You can work as much or as little as you want,” the site notes. 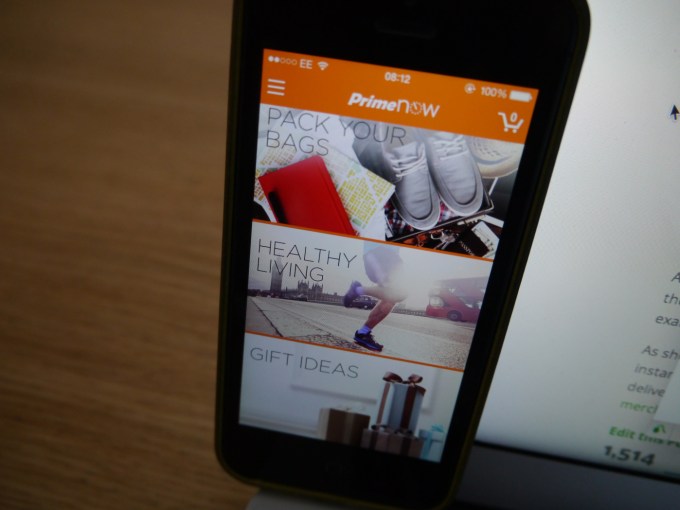 Before being able to take the jobs, Flex workers will have to pass a standard background check. They also have to be 21 years old, have a driver’s license, their own vehicle and an Android phone. (The Amazon Flex app isn’t iOS-ready, apparently – which is not surprising given Amazon’s own mobile operating system, Fire OS, is Android-based, and therefore its in-house expertise is more Android-focused, as well.)

When starting their shifts, drivers will pickup their deliveries from a nearby location, then deliver within a designated radius that’s based on the length of the delivery block they signed up for, notes Amazon.

Currently, the only Amazon Flex jobs are available for drivers, but Amazon says it may expand the service to include those who deliver via bike or on foot at a later point.

It should be interesting to see what sort of impact Amazon’s entry into the so-called “gig economy” will have on the space, as the entry of a larger player tends to legitimize the business model. And that model is being heavily debated as of late, as some companies, like grocery delivery service Instacart move away from using contract workers while others, like Uber, fight against having to reclassify workers as employees.

Amazon’s launch of Flex comes as the company is focused on finding ways of bringing down the cost of delivering items as it ramps up its Prime Now on-demand delivery service — a challenge Amazon also has looked at solving through acquisition.

Earlier this year, TechCrunch learned that Amazon wanted to buy Postmates, the San Francisco-based on-demand delivery service that — yes — relies on a crowdsourced workforce rather than established courier companies to bring items to your door. (Amazon declined to comment on any rumor or speculation related to Postmates.)

“There were many discussions about buying Postmates or anything to push down the price of delivery,” a source told TechCrunch. “They got pretty close with Postmates.”

The Postmates discussions were happening at the same time that Amazon was having a wider internal discussion about how to tackle delivery, both in terms of efficiency but also as a way of scaling the Prime Now platform to include more categories. That included the company eyeing up other startups in the food delivery space before ultimately launching their own ready-made food delivery service.

It’s not clear which side would have ended those discussions: Postmates in June ultimately raised a round of $80 million at a valuation of nearly $500 million, so the company may have chosen to grow independently. On the other hand, Amazon may have decided — as it has with other services like food delivery and home services — to build its own version from the ground up, potentially busting competition with its scale.

As The Wall St. Journal noted earlier this summer when news of Amazon’s efforts in building out its own delivery force first surfaced, the retailer’s interest in developing its own courier service could help the company contain shipping costs which grew 31 percent in 2014, faster than revenue. It also could give Amazon more leverage when negotiating with carriers on contracts.

The high price of shipping has been a longstanding problem for the company, which has led the retailer to make changes like increasing the price of its Amazon Prime membership program from $79 to $99, for example, among other things.

Amazon currently uses a combination of services to get packages into the hands of customers, including UPS, the US Postal Service for Sunday deliveries and early morning grocery deliveries in supported markets, and other contracted delivery firms for use with Prime Now. It’s even developing a program that would use drones for delivery, when the laws allow for such a thing.

The retailer hasn’t officially unveiled the launch of Amazon Flex through a formal announcement, but the website is now live and accepting sign-ups from interested workers.

Reached for comment, a company spokesperson confirmed the service is live in Seattle and will arrive soon in other cities where Prime Now operates.