Well, this is sure to provoke some debate.

Zumper, a venture-backed startup that focuses on creating a more efficient and transparent apartment rental marketplace, ran a study of housing costs in tech hubs across the United States. They’re arguing that one-third of San Francisco’s rents are attributable to venture capital funding.

Last year, venture firms invested $49 billion across the United States. The vast majority of it, or 78 percent, went to just 10 American cities.

“It is not a coincidence that these cities also top the list of most expensive rentals in the country,” the report said. 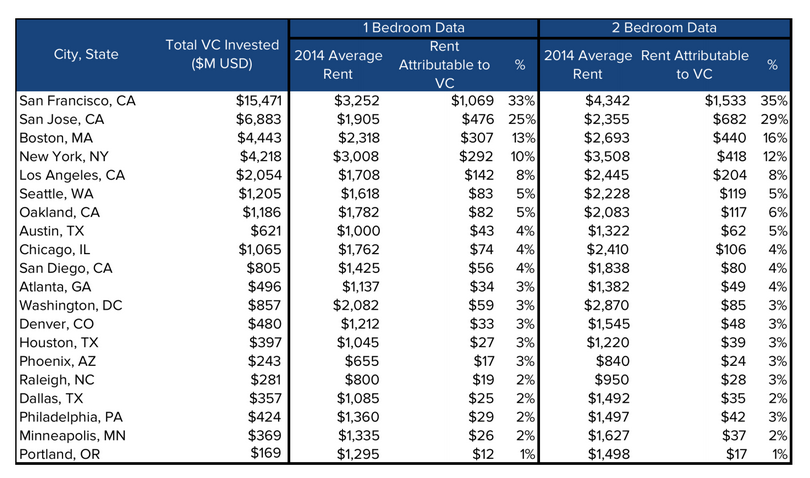 The Zumper study did not account for zoning regulations.

“It was tough to isolate an apples-to-apples comparison for zoning regulations, so we ended up not including it,” said Devin O’Brien, who heads up marketing for Zumper. “That being said, vacancy rates does include a lot of this as a secondary measure. However, at the end of the day, we had an adjusted R-squared correlation of 0.83 for venture capital investment. It’s very strong.”

Another study last year from UC Berkeley economics professor Enrico Moretti and University of Chicago’s Chang-Tai Hsieh argued zoning regulations are incredibly costly to the American economy. They found that if highly-productive cities like New York City, Boston and San Francisco had a more elastic housing supply, it could add 9.5 percent to the U.S. GDP.

These different types of findings have huge implications for the debate over who should pay for impacts to a city’s existing population, transit infrastructure and affordable housing. Should it be captured through property taxes? Land taxes? Income taxes? Impact fees for new construction? Impact fees associated with investment? Or should zoning regulations get relaxed, paving the way for more housing development across the entire region?

Generally, impact fees for additional transit use and congestion are assigned to new office and housing development. At a conference I attended at the Federal Reserve Bank a few weeks ago about displacement, there was a lot of discussion about the “collateral damage” that new, market-rate developments can have on surrounding ground-floor and residential rents and whether city governments should assess higher impact fees for that. Higher impact fees, would in turn, make make new housing construction more expensive.

The argument from this point of view is that new housing construction generates its own kind of demand.

Bill Fulton, an urban planner and former California mayor who runs the Kinder Institute for Urban Research at Rice University, argued: “Build more market-rate housing, and you’ll just accelerate the cycle – more smart kids will show up wanting to work for tech start-ups, and that means you’ll have more tech start-ups, and pretty soon demand will rise faster than supply – in large part because you increased the supply. To a local community activist, it feels like a no-win.”

But with new tech hires showing up in $1,800 bunk beds packed two or three times into single rooms, I’m skeptical that this is the case.

Tech workers are already here. They just have nowhere to live. A study from San Francisco city economist Ted Egan found that 97 percent of the time, higher-income newcomers to San Francisco move into pre-existing housing rather than new construction.

Instead, another question I’ve increasingly gotten is whether those impact fees should be tied to job creation or venture capital invested itself. That issue came up two weeks ago at a panel I moderated on family housing in San Francisco and up in Portland on Friday, where I gave a talk on the Bay Area’s mistakes in uncoordinated regional planning.

San Francisco used to have a payroll tax for many decades, but changed it three years ago under the argument that it taxed job creation. After 2011, when the city’s unemployment rate was near 10 percent, the city shifted toward a gross receipts tax and got rid of a payroll tax tied to stock options, which was the only one of its kind in the country.

Ron Conway told a packed audience this morning at TechCrunch Disrupt: “The tech industry has a lot to do with the housing issue. Since 2011, 101,000 tech jobs have been created in the city of San Francisco. In 2011, San Francisco unemployment was approaching 10 percent. Today, it’s less 4 percent. Give yourselves a round of applause.”

He added, “The biggest problem [Mayor] Ed Lee had in 2011 was unemployment. That problem is solved. A byproduct of this is housing.”

Conway urged people in the audience to vote for Proposition A, a $300 million affordable housing bond that the mayor is pushing. At current prices that run north of $250,000 per buildable unit in just land costs, this amount of funding would probably cover fewer than 1,000 affordable housing units, however. It’s an important symbolic move, but not an enduring structural solution.

Another alternative is to explore how to change the property or land tax structure. Anecdotally, a few CEOs of growth-stage companies have told me that they’re spending 40 to 50 percent more per hire than they were a few years ago, and essentially all of it is going into rent. With rents and home values rising about 15 percent per year in many parts of the Bay Area, property owners are getting a generous return for essentially sitting on land. Palo Alto home prices, for example, have doubled since 2006.

Last week, Social + Capital investor Chamath Palihapitiya complained about all the additional capital being funneled into rents instead of building products and new technology:

Speaking of property taxes, there is a small, but emerging movement to reform California’s Proposition 13 by disallowing commercial and office property owners from using the same exemptions and tax caps that residential home owners get. Robert Reich, who was the U.S. Secretary of Labor under President Clinton, recently got behind a bill put forward by state Senators Loni Hancock and Holly Mitchell of Berkeley and Los Angeles. It could generate an additional $9 billion in funding for schools and other services.

So what should it be? Status quo? Something different?