Jeonguk Lee and John Kim are hoping a different spin on flipping through food reviews is going to help you decide where to eat for lunch.

It’s an app called Foodie, which the pair showed off at the TechCrunch Disrupt SF 2015 hackathon. It shows photos and Yelp reviews of various foods in the area, and users can swipe left and right to save the ones that look good. The goal then is to show how many people in the area also liked what showed up on the app. 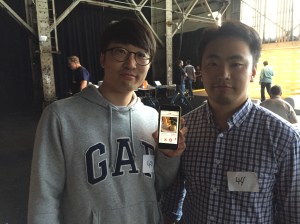 Picking new or the best restaurants, even for lunch with friends, requires slogging through a huge list of reviews on sites like Yelp. This is a huge headache in general, and Kim’s hope is that this will be more lightweight by showing user-generated images and restaurants that start off with pretty good reviews.

“We want to know where other people are around the location and then be able to give them what’s hot now,” Kim said. “That’s something Yelp doesn’t do; it shows you what was hot before, but it doesn’t show what’s trending now based on the weather. If it’s super hot, ice cream could be trending, for example.”

Of course there are challenges here. It’s a hackathon project, so the team has to make sure that it’s working soundly on not only a technical level, but also on an API connectivity level. This isn’t the only app going after something similar, with others like Nibbly on the App Store. But the hook, Kim says, is figuring out what everyone likes right now and using that to help figure out where to go get lunch.

Up next, according to Kim, is hopefully a feature that lets a group of friends flip through food photos to decide what looks good and showing the group what the consensus best photo was. “It’s basically, we’re thinking of doing a chat room like Slack. Think of this as a session and you invite your friends to this separately, and then when you go into it you see three people match and what all of us want.”